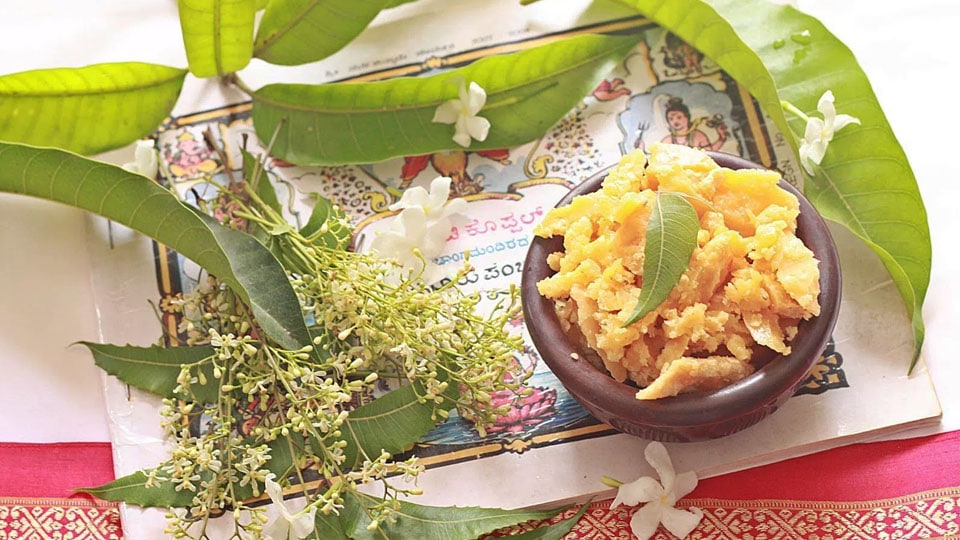 Yugadi, also pronounced as Ugadi, is a Sanskrit form of the Kannada word ugadi. It means the beginning of the yuga and it should not be taken literally because yuga symbolically represents the year or time which is eternal and waits for no man. That is why the popularity of the adage yuga yugadi kaledaroo… In other words, it is the beginning of a year. We have adopted sixty cyclic years beginning from Prabhava. Last year it was Hevilambi and this yugadi heralds the new year Vilambi on Mar.18 (Sunday).

According to Hindu tradition, there are three years of reckoning which are Sauramana, Chandramana and Barhaspatyamana. Roughly it can be stated that people in the North of the Vindhya mountain (North Indians) follow the Barhaspatyamana (Brihaspati mana). People in Karnataka and Andhra follow Chandramana (moon reckoning) and people in Tamil Nadu follow Sauramana or reckoning of the Sun. These are based on astronomical details and hence scientifically correct. In this connection it may be mentioned that ancient Indians were great adepts in astronomy for which they were admired world over. This should not be mistaken for Jyotishya which is rampant in our country. While some people praise it, others condemn it. That is a different matter of which we are not concerned here at this juncture.

According to evidences available, ugadi was celebrated in Babylonia around 2000 BC and that means it has an antiquity of over four thousand years. It was celebrated on a new moon day, not on Padya the first day of the first fortnight. The Assyrians also believed in this calculation. According to Roman Republic calculations it was believed to start on March 1. But later falling in line with other countries they changed over to 1st January. This has been confirmed by Julian Calender. But according to the Jews, the beginning of the year coincides with a date between Sept. 6 and Oct. 5. However, in Europe where Christianity was strong, March 25 was considered as the beginning of the year which we refer to as yugadi.

Till the Britishers were our masters, at their behest Jan.1 was considered as the beginning of the year and I remember that schools and colleges were closed on that day. Even the Government offices did not work on that day. In fact under their rule and direction March 31 was considered as the last day of the financial year and April 1 heralded the new financial year and hence government employees did not get their salary on the last day of March but on April1, the first day of the new year. Unfortunately, this system is prevailing even now though the British left us long back. There is no will and commitment on the part of our governments to change this system. But this is beset with many difficulties. North India has a different reckoning, Andhra and Karnataka have another set of dates while Tamil Nadu follows another reckoning. Under these circumstances, it is better to follow the present system instead of creating confusion among the people.

Whatever may be the system or date of yugadi, the purpose of celebration is more important. It is really a big festival like Deepavali or Dasara and people look forward to this festival. Usually on the morning of yugadi day the entire family takes what is known as oil-bath. The younger generation may not know the connotation of this practice. They shoot a question on traditionalists, whether the Americans or the British or the Australians take the so-called oil-bath. Shampoo-bath has become the order of the day. They give a pretext and say that they have no time for this so-called luxury. They may be right but the older generations would not accept this reason.

However, we welcome yugadi because it is a pretext for us to buy new clothes and the textile shops attract the customers giving discount in varying degrees. Thus there is a competition among the textile merchants. Even the poor would like to buy new clothes and government offices would give advance to celebrate yugadi. There is also an unhealthy competition among the neighbours.

Coming to the celebration proper on the yugadi day, people buy the panchanga or almanac which denotes five elements — the lunar day, the day of the week, the constellation, the conjunction of the planets and astrological divisions of the day. We buy the panchanga, worship it and read the good and bad for that year and if it is bad, give a religious gift to ward off the evil and gain punya.

Another important part of the celebration is to eat neem leaves and jaggery as prasada from the almighty. This is done with a prayer that life is not full of roses or full of thorns. It is a mixture of both and have to be accepted with equal poise. The verse in Sanskrit reads Shatayurvajradehaya Sarvasampatkavayacha| Sarvarishta Vinashaya nimbakam dala Bhakshanam. This means that we eat neem leaves and jaggery for attaining the life of hundred years with full health and strength, for prosperity and to ward off bad effects. There cannot be a better wish or prayer than this on the occasion of the first day of the New Year or Ugadi. Let all of us pray to the almighty to shower his choicest blessings on all human beings all over the world on the Ugadi Day. That is a universal and true prayer all of us should resort to. That is the message of Yugadi. Hope, all of you will say ‘amen’.