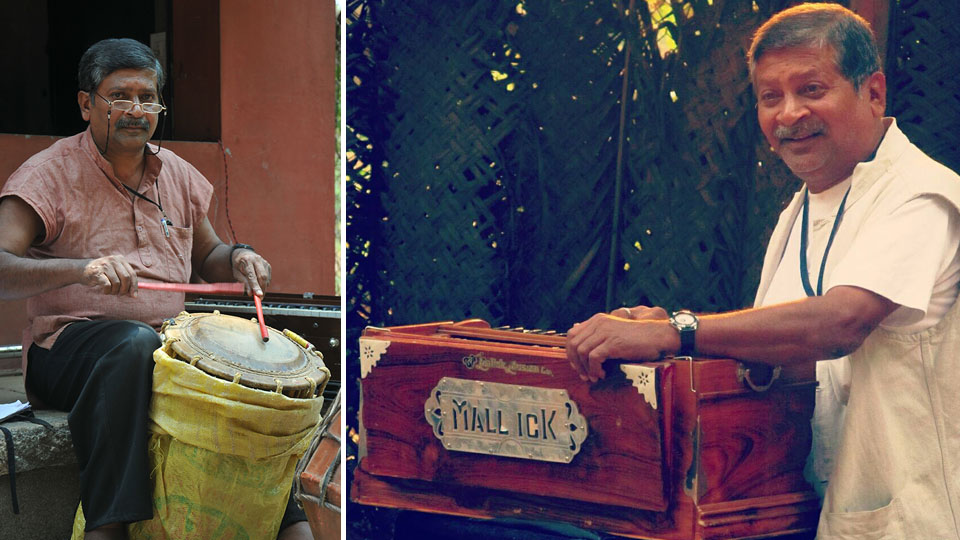 Whatever Kannada theatre has achieved today is the result of the revolution brought about 50 years ago by Padma Shri B.V. Karanth. Say THEATRE and MUSIC, one amongst the foremost names that strikes one’s mind is Babukodi Venkataramana Karanth, who with his innovative use of music made it big in modern Indian theatre.

Carrying Karanth’s legacy forward is Srinivas Bhat, fondly called Cheeni Mama, who is associated with Rangayana since its inception as music teacher. Though retired from service officially, he still continues his service to the music field.

Star of Mysore had a chat with this talented artiste, who resides at Vivekanandanagar in city with his wife Suchetha and son Giridas Bhat. He spoke about his theatrical journey and the bonding he shared with the legend in flesh and blood. Excerpts…

Star of Mysore (SOM): When and how were you initiated into music?

Srinivas Bhat: My father was a musician and was well-known as Tabla Das Bhat. My mother Girija Bhat was also a singer. My father used to take tabla classes from 5 am to 8 am and harmonium classes from 8 am to 9 am at our house. I learnt the art of playing tabla observing my father. When I was around five, Shreesha Das Bhat, a Harikatha artiste, came home asking for my father to accompany him for a programme but as my father was out of station, he took me with him. That was the first time I played tabla in public at Mahalingeshwara Temple in Avanje, Udupi.

SOM: You had formed a couple of music bands and performed in Goa.

Srinivas Bhat: When I was in 10th standard, I was interested in orchestra and wanted to learn guitar but there was no one to teach me. So I started watching orchestras. Though I had no money to buy tickets, I used to do pranks like pricking the leg of Policeman at the entrance and rush inside when he bent his head to see who pricked him. My friend Ganesha was always there to do this prank and I used to stand near the stage and observe how guitar was played.

While studying at Government Junior College in Udupi, an orchestra had come to the town. They used various instruments which influenced me and I too wanted to form a music band. Initially, I used to make music for Yuvaka Mandalis and many groups. By the time I completed my PUC, ‘Hemanth and His Orchestra’ introduced me in Goa as a guitarist. There were nearly 40 members in the orchestra and I was the lead guitarist. I also formed music bands like Stoneage, Cheeni Melodies, MAGTOC [Mohammed, Ashoka, Ganesha, Tagore, Oscar and Cheeni] before moving into theatre.

SOM: What took you to theatre world?

Srinivas Bhat: When I was around 26, ‘Rathabeedhi Geleyaru’ in Udupi had invited K.V. Akshara from NINASAM (Neelakanteshwara Natya Sangha) to perform in Udupi. It was Bertolt Brecht’s play ‘The Threepenny Opera’ and Akshara was in search of an orchestra. That is when someone mentioned my name and Akshara invited me to join him. He gave me a book and asked to compose music. The first song I composed music for was ‘Eldiddarenante padri purana…’ and Akshara was happy. After the successful show in Udupi, Akshara invited me to Heggodu show. I initially rejected his request to go to NINASAM as I used to earn good money by giving floor shows at a local bar. However, as Akshara asked me to join him at least for a year, I agreed.

SOM: NINASAM and Karanth — Share with us your memories attached to them.

Srinivas Bhat: At NINASAM, ‘The Threepenny Opera’ was in the morning session and B.V. Karanth’s ‘Miss Sadharame’ was in the afternoon. Karanth used to compose music and ask Kittur’s Basavalingaiah Hiremath to teach students. Hiremath did not know to write notations. I used to write them and teach others. Karanth was happy seeing me teach and that is how our bonding began.

SOM: You moved to Delhi after NINASAM.

Srinivas Bhat: When I was about to leave NINASAM, my sister who was in Delhi took me there and my brother-in-law put me in a garments factory. Without music, I had no life. Hence I started to visit National School of Drama (NSD) every day. There I met Bhagirathi Bai Kadam (now Rangayana Director), Ashish Vidyarthi (actor) and other artistes. My sister, who was concerned about me, helped me join Gymkhana Club as a guitarist but I didn’t want to continue as I was not happy with the atmosphere there. We were supposed to wear shoes, coat and tie which I had to borrow from my brother-in-law and I was so uncomfortable. I like to be bare-foot when I work. I do pranams to Mother Earth before starting my work and wearing shoes was the first thing I disliked.

SOM: Tell us about your journey back to Karnataka, particularly Mysuru.

Srinivas Bhat: On Dec.12, 1988, when I was walking home from Gymkhana Club at midnight, a person asked ‘Aren’t you Cheeni?’ and he was Prasanna of NINASAM. He said Karanth was searching for me and I should go and meet him. Then Karanth was working at Sardar Patel Vidyalaya on Lodhi Road in Delhi. The very next day, I took leave and went to Patel School but Karanth wasn’t available. I was disappointed and went to NSD to spend my day. I was in search of Bhagirathi Bai. To my surprise, Karanth was right in front of me inside a classroom. On seeing me, he came running and said, “I’ll come back in five minutes, I am taking viva.” When he was back, he chided me saying: “I’m forming Ranga Ghataka in Karnataka. Why did you come to Delhi?” He was the one who brought me back to Mysuru. Among the 350 people interviewed, I was selected for Ranga Ghataka (now Rangayana).

SOM: Share with us your compositions for theatre and some productions you have worked for.

Srinivas Bhat: When Jayatheertha Joshi was the Deputy Director of Rangayana, he did Girish Karnad’s play ‘Taledanda.’ Earlier, Karanth had scored music and had played it elsewhere. As Karanth wasn’t well, I was asked to take over. So I heard all cassettes, noted down the notations. Karanth’s music had alapa and I wrote notation for the first time for a play. Joshi was happy and he took my notations and even today, my notations are used for this play which has given over 150 shows so far. Next was Gopala Krishna Adiga’s ‘Bhoomigeetha,’ for which I used only guitar music. After Karanth, I scored music to almost all the plays of Rangayana. Apart from that, for amateurs, I gave music to over 300 plays including those of Niranthara Foundation, GPIER and Amara Kala Sangha. I have composed music for about 700 songs till date.

SOM: Your bonding with Karanth?

Srinivas Bhat: I don’t hesitate to say I was ‘Adige Bhatta.’ I used to cook Udupi food and Karanth liked it. I used to stay in G7 (Rangayana building) and Karanth stayed at A4. What embarrassed me was Karanth, being a national figure, coming to me with a bowl and asking, ‘Thambuli unta… Chatni unta…’ (coastal food). I still remember the time when Prema Karanth came to Rangayana and told me: “You should take care of Karanth. You should eat and make him eat.”

I used to prepare food at 6 am and get ready for classes. Once I was late for Yoganarasimhan’s Ranga Sangeetha class by 10 minutes. Karanth scolded me in front of everybody for being late. I felt insulted. 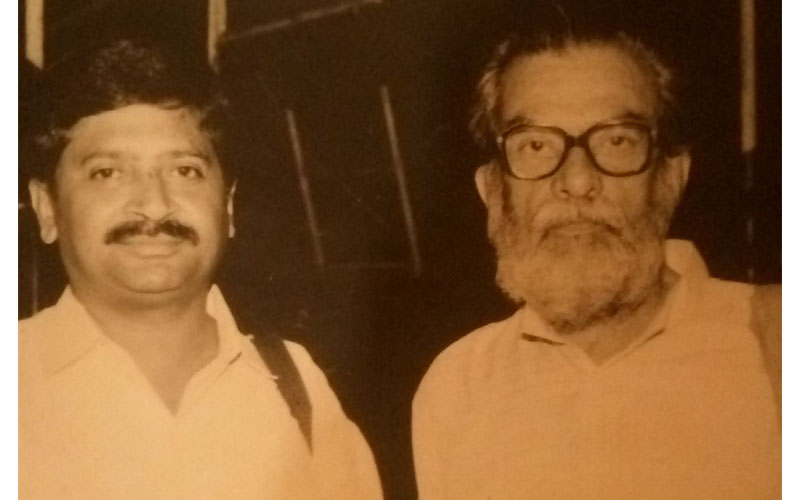 Around 2.30 pm, Karanth came and asked me why I didn’t go to his house. I said I felt ashamed that he scolded me in front of everyone. Later, I heard Karanth saying to Basavalingaiah, who was the Director then, “Shouldn’t a father scold his son?” Hearing that, all my sadness vanished. Even in the book ‘Illiralare Allige Hogalaare’ (Here, I Cannot Stay; There, I Cannot Go — autobiography of B.V. Karanth as told to Vaidehi), Karanth has mentioned Mysuru’s Cheenam Bhatru is among his favourite three ‘Bhats.’ Whatever I eat, I live is because of Karanth.

SOM: According to you, what was unique in Karanth’s music?

Lotte / Lolaga – made of bamboo – which is tied around cow’s neck gives out different sound from one cow to another. That is how villagers recognised their cows earlier. Karata, Gaggara (tied to horn of cattle), all these inspired Karanth to create music. With Karata, you can make music of a horse walking or wind blowing. Now in theatre, everything has been modernised and no one uses such instruments. But till my last breath, I will follow Karanth.

SOM: You were fascinated by guitar and ended up with Avadyas. How?

Srinivas Bhat: My inclination towards western music reduced gradually as I got associated with Karanth. Karanth didn’t like using organs. So probably, being with him, I too was influenced. I believe in my hand power and not electronic instruments. I like searching for sound. Hands never fail but electronics is what fails. Harmonium listens to us. Electronic instruments may breakdown if there is a power cut.

Srinivas Bhat: When C.  Basavalingaiah became Rangayana Director, he started conducting Chinnara Mela annually and I was there teaching music. Mime Ramesh was the one to start it though. From then on, kids started addressing me as Cheeni Mama. In 15 years, I have taught about 12,000 children. Once, for ‘Mahabharata,’ a total of 1,000 children were taught in one particular year. This association with kids made me well-known as Cheeni Mama.