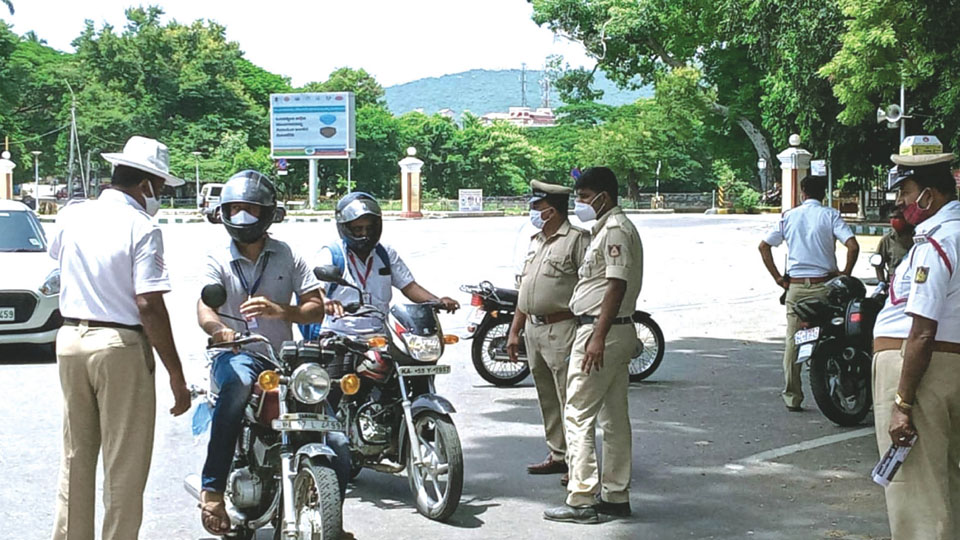 Mysore/Mysuru: Mysuru City Police, who are conducting regular drives against lockdown violators in city, have seized a total of 506 vehicles in the past three days, to initiate legal action.

The District Police have seized a total of 1,647 vehicles in rural areas from the day the lockdown came into force besides registering 393 cases till June 8.

There are 24 check-posts in the district, which are manned by Police personnel 24 hours a day. Vehicles entering Mysuru City have to pass through check-posts installed on Jayapura, Bannur, Yelwal and near APMC Yard on Nanjangud Road, where they are stopped for checking.

Additional Superintendent of Police (ASP) R. Shivakumar, speaking to Star of Mysore, said that from Apr. 27 till June 8, a total of 1,674 vehicles including two-wheelers, cars and other vehicles have been seized and 393 cases registered. He further said that Police Officers and staff are also working at the Taluk Task Force, constituted by the District Administration, to help prevent the spread of the deadly virus.

Continuing, the ASP said that families staying in small houses at rural places are coming in contact with infected people and the Police are convincing those who are afraid of getting themselves tested for COVID to get tested and are also bring them to COVID Care Centres.

“There are more people in rural places who say that they are fine and nothing has happened to them. Hence, precautionary measures have been taken to prevent the spread of Coronavirus. If people stop violating the Government guidelines and understand the situation, the spread of the virus will be reduced,” ASP Shivakumar said.