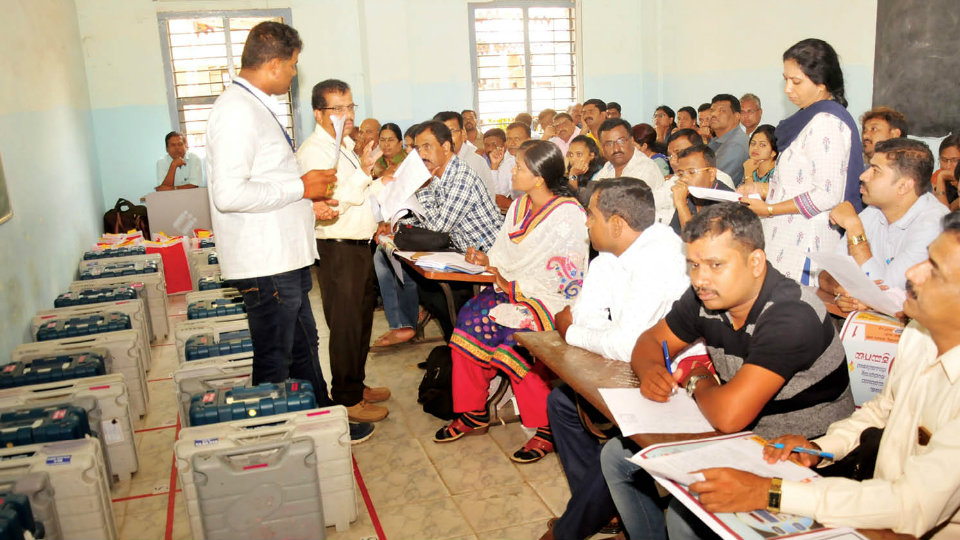 Lok Sabha Elections-2019: Polling tomorrow from 7 am to 6 pm

The mustering began with Polling Officers of different designations and other poll staff arriving at their respective centres at 7 am. Soon after their arrival, all the staff were required to sign the register as proof of their attendance for poll duty.

The mustering was held under the supervision of Assistant Returning Officers (AROs) under tight Police security.

The poll officials, after signing the register, were required to take their designated EVMs and all other poll materials and stationeries, which included indelible ink vials, paper rolls, etc., and board the KSRTC bus assigned to the booths. The District administration has engaged 406 KSRTC buses for poll logistics.

All the poll staff are expected to reach their designated polling booths this afternoon and begin preparations for tomorrow’s voting.

Before the commencement of the polling at 7 am tomorrow, the officials will check the EVMs for their functioning. In case of any glitches, the poll staff are required to report the same immediately to the higher authorities.

Even as the poll staff reported for mustering this morning, the District Administration has warned that action will be taken against such staff who abstain from poll duty without genuine reasons.

Also, there are 11 exclusive Tribal Booths, with three each in Hunsur, Periyapatna and Virajpet Assembly segments and two in Madikeri segment.

Apart from this, there are 7 exclusive polling booths for the differently-abled — one each in 6 Assembly segments of Mysuru district and one in Madikeri segment, where wheelchairs and other prosthetic equipment and Braille ballot papers for the visually-impaired have been despatched in enough numbers.

With voting scheduled to take place from 7 am to 6 pm tomorrow, the District Administration, as per the direction of the Election Commission, has clamped prohibitory orders under Section 144 and 144 A of CrPC, in 200 mts. radius of all polling booths in the district till midnight tomorrow.

After the voting ends at 6 pm tomorrow, the EVMs from all the 2,187 booths of the Constituency will be brought to Maharani’s Women’s Commerce and Management College on Valmiki Road, Paduvarahalli (Vinayakanagar), Mysuru, where they will stored and secured till May 23, when the counting of votes will be taken up.