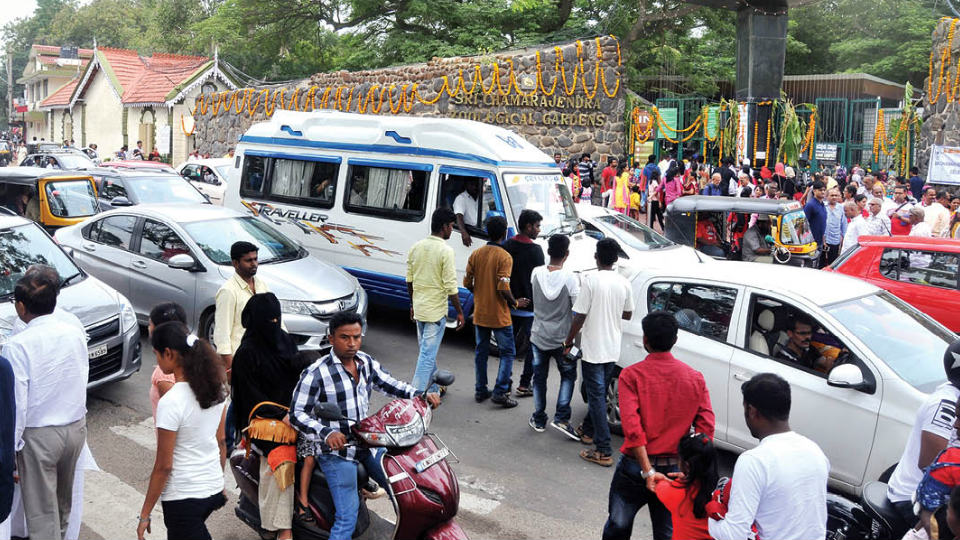 Mysuru: India is a country of festivals and holidays. If the holidays fall at the end of the week, then everyone plans on long weekend holidays.

Luckily, August has two long weekends and Mysuru being a tourist city, there is a rush of visitors that began two days ago. It was second Saturday (a holiday on Aug. 12) followed by Sunday (Aug. 13) and many applying leave on Monday and tomorrow being Independence Day, it is a great opportunity for tourists to enjoy the long holiday.

The inflow of tourists was at its peak today in the city, with the tourist attractions like KRS, Chamundi Hill, Zoo and Palace witnessing a huge number.  Mostly the visitors are from Kerala, Tamil Nadu, Andhra Pradesh and Telangana. They were coming in droves in cars, coaches, buses both private and Government, tempo travellers, cabs and there was an atmosphere of bonhomie and gaiety.

The ticket counters were chock-a-block as the visitors fell over another to buy tickets with the children and the aged in tow. They had to pass through metal detectors and the security guards had a tough time controlling the crowd. The whole area was jammed with vehicles as there is no proper place for parking.

The guards also kept a strict vigil on the people and were seen confiscating plastic bags as the Zoo is a plastic-free zone. Pickpockets are known to loiter around the Zoo and announcements were being made to be careful about them. The crowd near the Snake Park inside the Zoo was thick and the common complaint was this is where the pickpockets strike.

Mysuru Zoo Executive Director C. Ravishankar speaking to Star of Mysore said, “Since three days there is a huge rush. We have installed nearly 90 CCTV cameras to capture the miscreants. The Police are keeping an eye on suspicious movement of people and the gatekeepers are alert all the time to prevent any untoward incident.”

The scene atop the Chamundi Hill was no different as the devotees thronged the temple in large numbers. The Palace, which never fails to strike awe among the tourists, especially the first-timers was overflowing. The Police had a tough time controlling the crowd. The metal detectors are installed and everyone entering was being frisked.

The next long weekend is from August 25, Ganesha festival which falls on a Friday.