Home » Columns » Abracadabra By K. B. Ganapathy » 70 Years of Democracy: Saluting the Majority and Minorities of India 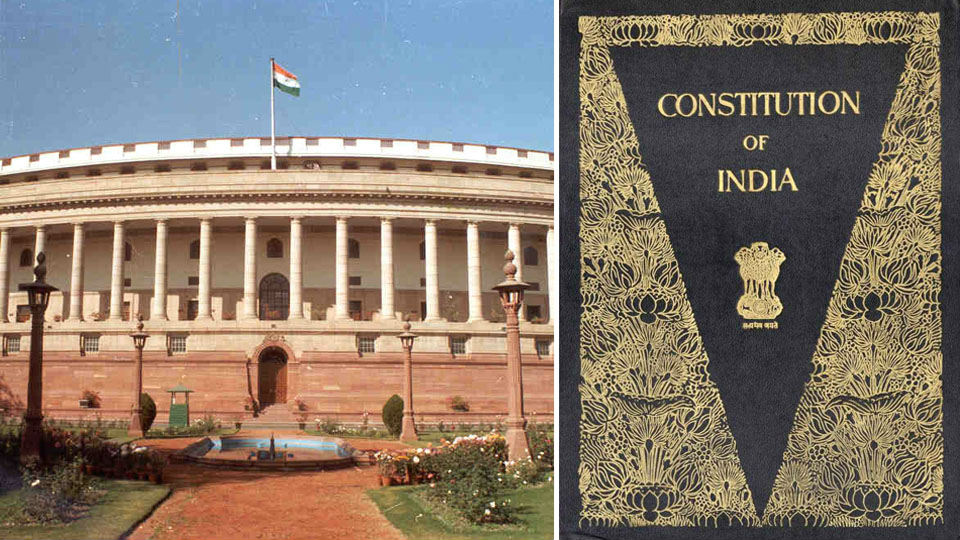 70 Years of Democracy: Saluting the Majority and Minorities of India

“Indians may have a vote but they are not represented.”

A diplomat is one who remembers the birthday of a woman but forgets the year of her birth. So goes a joke on diplomats. Our immediate past Vice-President Hamid Ansari seems to have forgotten this diplomat’s credo, himself having been an IFS man, who worked and retired as a diplomat when he was hand-picked by UPA for Vice-President’s Office, no doubt because he was a Muslim. Otherwise, he would not have said what he said on demitting his Office: “There is a sense of unease among Indian Muslims.” This was the parting shot of Hamid Ansari to the majority Hindus, no doubt. Let it be.

That he certainly did not suffer that “sense of unease,” though a Muslim, must be acknowledged from the fact that he held the position of great power and honour all through his life. Yet, he had chosen to speak, on what evidence we do not know, for the Muslims of the country. Not surprisingly, the new Vice-President M. Venkaiah Naidu accused Hamid Ansari of indulging in “Political Propaganda.” For whom? You guessed it.

The National General Secretary of BJP Kailash Vijayvargiya hit the nail right on the head when he accused Hamid Ansari of seeking “Political Shelter” post-retirement from UPA. He was merely speaking his “Mater’s Voice.” I guess, though he had his Freedom of Speech as a matter of right in this country, he seemed to have timed it wrongly.

There is absolutely no doubt Hamid Ansari was a wise and learned person but his scholarship should not cross the ‘Lakshman Rekha’ necessary to preserve and protect Democracy as a political system of a civilised country. Could be that he had gone overboard in underscoring and justifying a profound statement made by our former Vice-President and then President Dr. S. Radhakrishnan that he quoted in his parting Rajya Sabha speech:

“A Democracy is distinguished by the protection it gives to minorities. A Democracy is likely to degenerate into a tyranny if it does not allow the opposition groups to criticise freely and frankly the policies of the government.”

This takes me to an earlier occasion when our Prime Minister  Narendra Modi had completed three years in Office. Then President Pranab Mukherjee  said Modi was one of the most effective communicators who has given a new direction to India’s economy. He should know, having been the Finance Minister of India for many years in the Congress government. Pranab Mukherjee also said, “Without the capacity to be a good communicator, one cannot expect to lead millions of people… The subjects chosen by Modi for his (monthly) radio programme ‘Mann Ki Baat’ affect the lives of a billion people.”

Now, turn to Hamid Ansari who also spoke on the occasion: “Mann Ki Baat is an ingenious and influential communication platform created by Modi…”

Continuing, he made a very wise, and in my opinion, a timely observation sans “Political Propaganda for Congress,” if I may say so. To me, the language he used, as published in the newspapers I read, seemed a bit complex. I may need help to dissect or unravel its deeper meaning from the book “Do I Make Myself Clear?” by Sir Harold Evans, former Editor of The Sunday Times and The Times of London.

This is what Hamid Ansari said: “Semantics differentiate between an Orator and a Demagogue; both speak to persuade, both play on emotions. The difference is often subjective and depends on the trust reposed by the audience.”

History tells me that Adolf Hitler was a Demagogue and Winston Churchill was an Orator. Do we see a parallel in Narendra Modi here to Hitler or to Churchill? Using the power of semantics, Hamid Ansari has made his listeners to decide who Narendra Modi is — a Demagogue or an Orator. Here indeed Hamid Ansari exposes himself, nay reveals himself, as a true diplomat. An attempt at hurting without wounding!

Be that as it may, I am no mind-reader but this time let me hazard one. Hamid Ansari thinks Narendra Modi is a demagogue.

I have read that in the Greek City State Athens, when Pericles spoke, the people said ‘How well he spoke’ but when Demosthenes spoke, the crowd shouted ‘Let us go and burn their houses.’ This is the difference between Oratory and Demagogy. Which of these two speakers could be compared to our Narendra Modi is what seems to be bothering some of the ‘Secularists.’

READ ALSO  The Rotary Journey: To S.Korea and Japan - 3

Likewise, in Rome a few hours after Cicero, the noble Roman Counsel spoke on an issue, another Counsel Claudius spoke and succeeded in exciting the mob to a serious riot by raising the issue of rising price of corns as one of the results of exiled Cicero’s return to Rome. So much for Oratory and Demagogy.

On this 70th year of our Independence, I could not but agree with the Indian origin UK leader Lord Meghnad Desai, who was asked in an interview published in The Hindu of August 8, 2017:

Question: What is the prescription for the Congress?

Answer: I would advise the Congress to construct a narrative based on citizenship, not on binaries Secular-Communal. Religion is a private matter and a person’s rights should be guaranteed as Citizens of the Country not because they are Hindus or Muslims…

He then goes on to give the example of the Bangladesh writer Taslima Nasrin. In West Bengal, even the Communists (so called Secularists) were not backing her or protecting her because of fear of losing Muslim votes. If this is a genuine Secular country, this cannot happen, this Secularism is bunkum. This is just a vote-getting trick. Go back to the notion of Rights, a notion of Citizenship first and then think of Concession and Reservation based on Caste or Minority Status.

A re-think on these lines might help further strengthen  our Democracy now racing towards an unknown future.

Note: I dedicate this ‘Abracadabra’ to my friend K. Vijaya Kumar, former Jt. Director of Information and Publicity, for inspiring me or provoking me  (I do not know which of the two) to write this column after reading my yesterday’s article in SOM titled, “50 years of Freedom and Failures.”  He had sent me a message yesterday night at 10.11 pm stating: “India 70 should appear tomorrow 14th in your column. I urge you to start writing it now.” When a friend orders, it is pleasure to obey. Here it is. — KBG

3 COMMENTS ON THIS POST To “70 Years of Democracy: Saluting the Majority and Minorities of India”