Home » Columns » Abracadabra By K. B. Ganapathy » Secularism for Hindus at the mercy of Courts? 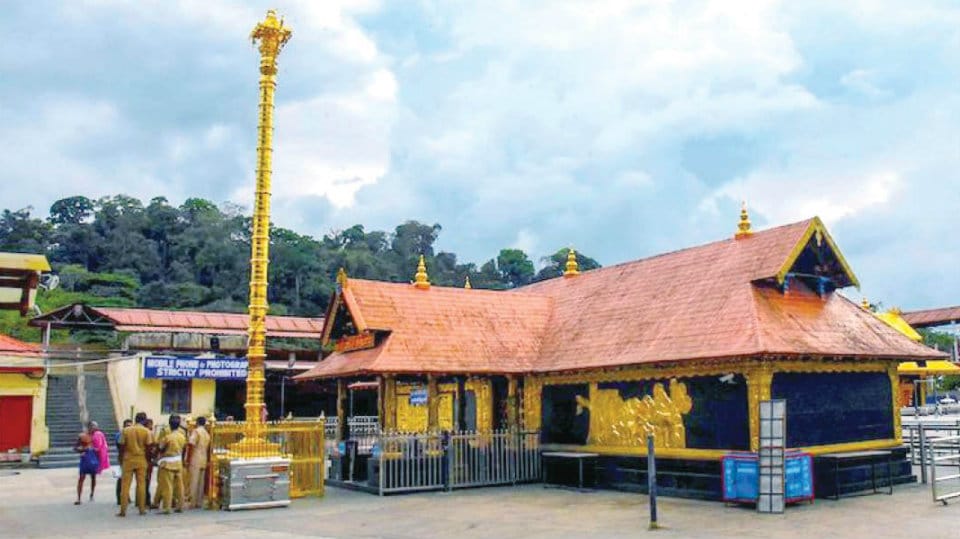 Secularism for Hindus at the mercy of Courts?

The Sabarimala Temple of the presiding deity Swamy Ayyappa, which is under a controversy following a Supreme Court order to allow women of all ages to enter the temple and offer prayers, was opened yesterday (Monday) for the annual temple festival being held for 10 days. The festival will end on Mar. 21. The temple has got a new gold-plated door for the sanctum sanctorum. This may be to make the new rush of women devotees happy. After all, women love gold !!

So far, no news about possible trouble at the shrine with women devotees going on a pilgrimage, with or without Police protection, has appeared in any media. However, one need not be surprised if problems erupt like it happened in the past ever since the Supreme Court gave its controversial decision.

Many were complaining that the traditional practice was a clear case of nihilism or misogynism.

The matter was taken to Court when in a Secular country, the Government or any Constitutional body, including the Judiciary, should have no role in interfering with matters religious, specially when there is no criminality or Human Rights violation. It is, therefore, not surprising that Rashtriya Swayamsevak Sangh (RSS) passed a resolution demanding protection of beliefs and traditions of Hindu society at the Akhil Bharatiya Pratinidhi Sabha (ABPS) held at Gwalior last Sunday. The ABPS also observed that there has been a systematic design to insult and hurt Hindu beliefs and traditions on the basis of non-Hindu beliefs and practices by entities with vested interests to denigrate Hinduism. The resolution specially mentioned the case of Sabarimala Temple as an example of this inimical and anti-Hindu design.

If Courts were to decide on such questions of faith and belief against the sentiments of an overwhelming majority of a community, we may have to look for an alternative definition of the word ‘Secular’ and its import. Right now, the interpretation of the word ‘Secularism’ and some provisions of the Constitution seem rather discriminatory.

I have been observing the ways of some of the Supreme Court Judges and the obiter dictums rolling out of their lips wrapped in enigmatic veils ever since May 16, 2014. Some senior advocates were even seen prompting the Judges and even giving suggestions to hear Ayodhya case, as old as the Himalayas, after the elections !

Having seen some of the    decisions and reactions to them by some of the political parties and leaders to either nullify, review or simply delay or get a death sentence in a ‘rarest of rare cases’ and also in cases of terrorism involving the security of our nation commuted, I have a suggestion. Setup a Privy Council of the President of India, like that of the British monarch’s in England, above the Supreme Court.

This Privy Council will take the last and final call on cases where the question of ‘Secularism,’ ‘Freedom’, Fundamental Rights’, ‘Socialism’, ‘Patriotism,’ ‘Nationalism’, ‘Nation’, ‘Minority’, ‘Majoritarianism’, ‘Terrorists,’ ‘Militants’ and more are decided in the Supreme Court but challenged.

Recently, I was reading an article about Germaine Greer, an 80-year-old celebrated feminist, intellectual and polemicist of Australia, which alludes to her opinion about the Sabarimala controversy when brought to her notice in the interview — about women fighting for entry into Sabarimala Temple following Supreme Court judgement. This is what she said spontaneously:

READ ALSO  A.K. Subbaiah as I knew him

“I will ask why? If it was a golf club, it would be fine (fighting for entry). They could say, ‘We only allow women with red hair in.’ Why can’t we women, start a club (probably with similar conditions) where the men are begging to be let in.”

Germaine Greer disagreed with the Court’s ruling rather vehemently and said:

“I think the decision by the Court, a secular authority to ask a religious establishment to abide by their decision is profoundly wrong. India depends on a concept of freedom of religion.”

However, she was equally vehement when asked if it made her angry when women were considered “impure” for a few days each month (during her menstrual cycle). In her retort, she said, “It is nonsense. Not even typical of Hinduism.”

Now, what is that? I guess, it could be that the idea of “impure” is not a rule or absolute belief per se but only an exception as in the case of Sabarimala Temple. If it is so, so be it !

10 COMMENTS ON THIS POST To “Secularism for Hindus at the mercy of Courts?”