Home » Columns » Abracadabra By K. B. Ganapathy » Judge’s Day of Judgement: A scandalous Saturday for our Supreme Court 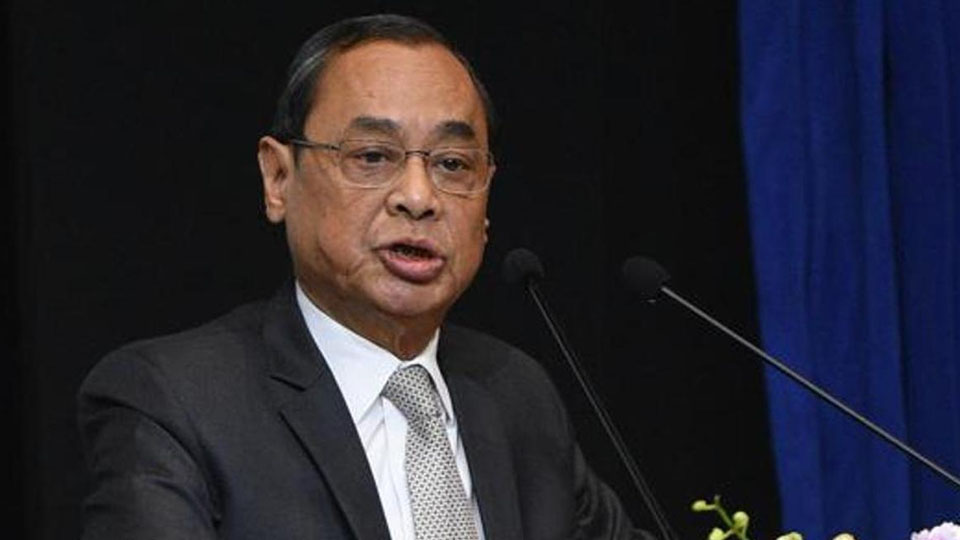 Judge’s Day of Judgement: A scandalous Saturday for our Supreme Court

Exercise restraint and remove such material which is undesirable… act responsibly as is expected from them and accordingly decide what should or should not be published as wild and scandalous allegations undermine and irreparably damage the reputation and negate independence of the judiciary. — Justice Sanjiv Khanna and Justice Arun Mishra, while passing order on Saturday, 20th April, 2019 after a special hearing to reject the allegations of sexual harassment published against CJI Ranjan Gogoi by four digital media organisations.

I would rather have completely free Press with all the dangers involved in the wrong      use of that freedom than a suppressed or regulated Press. — Speech of Pandit Jawaharlal Nehru at the Newspaper Editors’ Conference held on 3.12.1950

If salt loses its flavour with what it shall be savoured. — The Bible

The Chief Justice of India (CJI) Justice Ranjan Gogoi called the sitting of a three-Judge Bench with himself presiding on a moment’s notice on 20.4.2019. It was an urgent special hearing.

The purpose was to reject allegations of sexual harassment that were published against him by four digital media organisations (Scroll.in, Caravan, The Wire and The Leaflet). Justice Arun Mishra and Justice Sanjiv Khanna were the other two Judges of the Bench.

In the hearing, Solicitor-General Tushar Mehta made the special mention terming the allegations rubbish. Understandably, the notice issued for this special sitting said the hearing would be of “A matter of great public importance, touching upon the independence of the Judiciary.”

Attorney General K.K. Venugopal said the media reports violated the diktats of absolute confidentiality required in cases such as the one before the Bench. CJI Gogoi said “The responsibility of calling this hearing is mine. We had to take this extraordinary and unusual step because this has gone too far. Judiciary cannot be made a scapegoat… What I want to tell citizens is that judiciary of this country is under serious threat.”

Reading this observation coming from CJI Ranjan Gogoi in a case where he himself is the defendant, my memory went back to the day — 12th January, 2018 — when an unprecedented as much as an unprincipled incident shook the whole nation to its very legal foundation. On that Friday morning, during holidays, four Senior Judges of the Supreme Court of India (including the present CJI Ranjan Gogoi himself and Justices M.B. Lokur, Kurian Joseph and J. Chelameswar) called a press conference mainly to take objections to the manner in which the then CJI Dipak Misra (now retired) was allegedly constituting the Supreme Court Bench in a most selective way. Apparently at that time, CJI Gogoi did not think what he was doing with his other three brother Judges was not in keeping with the dignity and majesty of a Supreme Court. Surprisingly, at that time, it did not dawn upon His Lordship that what he was doing, along with his three other brother-Judges, undermined the power of the then CJI. I guess he must be regretting that day because, now, he as CJI, is under siege being questioned of his power to constituting the Bench in this case.

Now, again, see the irony of it all. Then it was the assignment of Judge Loya case (remember?) to Judge Arun Mishra’s Bench which was the immediate reason for that “extraordinary” press conference. And now the same Judge was in the Bench constituted by CJI Ranjan Gogoi ! Sometimes, a sinister decision that we take which hurts another person, comes to visit us. I guess this is one such case. Providential retribution?

According to Dushyant Dave, a Senior Advocate and former President of the Supreme Court Bar Association, what CJI Gogoi had done “are all acts done by the CJI contrary to ‘Nemo judex in causa sua’.”  [It is a Latin phrase that means, literally, “no-one should be a judge in his own case.” It is a principle of natural justice that no person can judge a case in which they have                                        an interest].

He further says “There was no cause, no matter, no petition and no reason for the Court to take upon itself the perennial duty to protect its reputation.” Well, one would least expect this kind of action, as Dushyant Dave says, from a person who was present in the Jan. 12, 2018 press conference. There seems no difference between what was found wrong with his predecessor CJI Dipak Misra and now Ranjan Gogoi himself as CJI considering the manner in which he constituted the three-Judge-Bench in this case in violation of the procedure established by law and as well as the principles of natural justice, according to the Supreme Court Bar Association.

Interestingly, when both print and electronic media are dragged to the Courts for defamation, both Civil and Criminal, for publishing allegedly defamatory reports, bail and attendance are compulsory. Courts are usually harsh on journalists trapped in such cases. Surprisingly, the Supreme Court Bench in this case was rather kind and gentle when the Judges merely asked the media to exercise restraint and remove “such material which is undesirable.” There was also a piece of advice to the Press by way of obiter dictum saying, “Act responsibly as is expected from them and accordingly decide what should or should not be published, as wild and scandalous allegations undermine and irreparably damage reputation and negate independence of judiciary.”

READ ALSO  Pep-talk and a Selfie with Ambareesh

I am sure the print and electronic media are heeding to this sublime advice of the Judges. Interestingly from the Government, it was Arun Jaitley, Union Finance Minister and an Attorney, who had rushed to defend CJI Ranjan Gogoi.

Being in the Government Arun Jaitley may have some knowledge about the alleged “conspiracy” in the case. Which is why, in a related development, a Supreme Court lawyer Utsav Singh Bains, who claimed to have been offered Rs. 1.50 crore to represent the woman and hold a press conference on the woman’s allegations, filed an affidavit wherein he accused one Ramesh Sharma and a corporate giant, whose case is in the Court, as being behind the conspiracy to force CJI Gogoi to resign.

The Court had asked this Advocate to present himself in Court today (Wednesday) and submit all the relevant materials in this regard.

But why conspiracy? Therein hangs a tale ! When the Court hears this affidavit, hopefully, the detailed revelation, with truth tumbling out in the open, of the Why and What of that ‘conspiracy’ would be known and CJI Ranjan Gogoi might come out of this ordeal by fire unscathed, his integrity, moral stature and honour in tact.

If there is conspiracy then there must be conspirators. The conspirators, probably, were emboldened to do this act because of the 12th January 2018 press conference which had exposed the soft-belly of the Supreme Court itself.

For now let us wait for the Panel of three Supreme Court Judges — including a woman Judge — to deliver its verdict on this case of ‘conspiracy’  and ‘allegation’ against CJI Ranjan Gogoi.

All said and done, it would be interesting to know how this case would end. After all, CJI Ranjan Gogoi retires on November 17, 2019. Hope the case will be decided before he retires.

2 COMMENTS ON THIS POST To “Judge’s Day of Judgement: A scandalous Saturday for our Supreme Court”