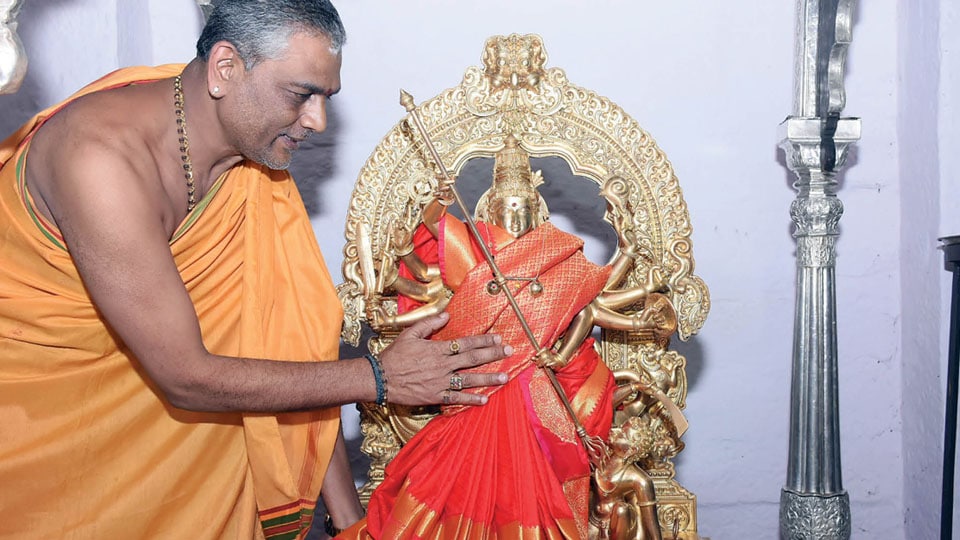 Mysore/Mysuru: Dasara festivities will be inaugurated tomorrow and this is that time of the year when the Heritage City of Mysuru comes alive. Owing to COVID, celebrations will not be full scale but a toned-down one to prevent the spread of killer virus.

Along with the line-up of programmes, even the number of attendees to events has been fixed with the District Administration and Police being given the authority of crowd control.

Though the entry of people has been restricted to 400 during inauguration, Mysuru District Minister S.T. Somashekar announced at the Chamundi Hill this morning that devotees will be allowed entry soon after the inauguration.

It will be the 412th Dasara Navarathri that was started by the erstwhile Mysore Kingdom in 1610 AD. The Nada Habba will be inaugurated by former Chief Minister S.M. Krishna atop Chamundi Hill in the auspicious Tula Lagna between 8.15 am and 8.45 am on Oct. 7 (tomorrow), in the presence of Chief Minister Basavaraj Bommai.

At the Hill this morning, a stage was set up and as the Indian Meteorological Department has warned of heavy rains, the District Administration has been asked to put up water-proof pandals to accommodate the dignitaries on the dais and also the sanctioned 400 attendees.

The Mysore Palace Board has completed the traditional handing over of the idol of Goddess Chamundeshwari, the presiding deity of Mysuru, to the Department of Muzrai. The 2-ft ‘Panchaloha’ idol in the style of Mahishasura Mardhini was carved by sculptor N.S. Janardhan Murthy in 1990.

This is the idol which is kept inside the Golden Howdah and taken out in Jumboo Savari procession. The idol is put on display inside the Palace Museum and taken out only during the Dasara festival.

The same idol is placed inside the Silver Chariot on the inaugural day of Dasara atop Chamundi Hill every year on which the dignitaries shower flowers.

The idol has been polished and kept ready inside the Temple and priests will perform pujas to the idol daily. The idol will be returned to the Palace Board authorities after Jumboo Savari on Vijayadashami Day.

This time on Vijayadashami Day when the idol is brought from the Hill Temple to the Palace, a chance will be given for devotees to perform pujas all along the way as the entry of more people has been barred inside the Palace.

Tomorrow for the Dasara inauguration, the rituals will begin at 4.30 am under the leadership of Chamundi Temple Chief Priest Dr. N. Shashishekhar Dikshit with Rudrabhisheka and Panchamrutha Abhisheka.