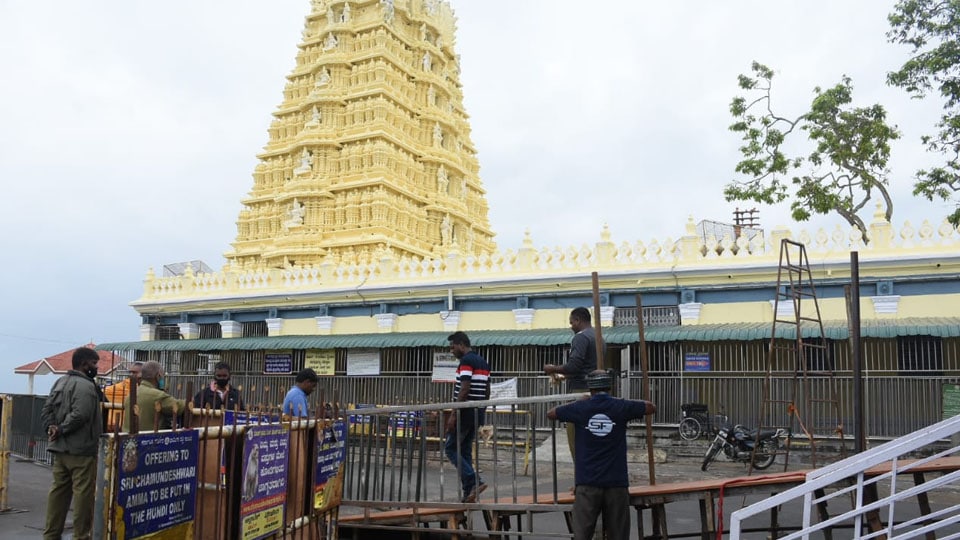 Mysore/Mysuru: Though the District Administration’s decision to ban entry to Chamundi Hill till Oct. 7 noon has come under flak from devotees, a lot of guests have found their names in the Dasara inauguration itinerary and it is set to be an exclusive VIP event. For the record, it is a simple Dasara due to the pandemic.

The authorities have justified the move on the grounds of providing security to VVIPs including Chief Minister Basavaraj Bommai and other dignitaries but sensing public anger, it has now been decided to allow free movement of devotees to Chamundi Hill after the inauguration.

The Jumboo Savari, scheduled for Oct.15, will take place only within the Palace premises this time due to COVID pandemic and in the presence of a specified number of people, with all Government SoPs in place.

Chief Minister Basavaraj Bommai is scheduled to arrive at Mysore Airport in Mandakalli  at 3.50 pm today.

He will participate in the valedictory ceremony of ‘Modi Yug Utsav’ organised by MLA S.A. Ramdas at Vidyaranyapuram. The CM will stay overnight at KRS in Srirangapatna taluk.

On Oct. 7, he will leave KRS at 7 am and reach Chamundi Hill at 7.45 am for Dasara inauguration. The CM will later proceed to Mysore Airport and receive President Ram Nath Kovind at 10.40 am.

He will travel by road and participate in the inauguration of the super speciality hospital in Chamarajanagar between 3.30 pm and 4.30 pm. He will again come to Mysuru to inaugurate the Dasara cultural programmes at Palace in the evening and will leave for Bengaluru later.