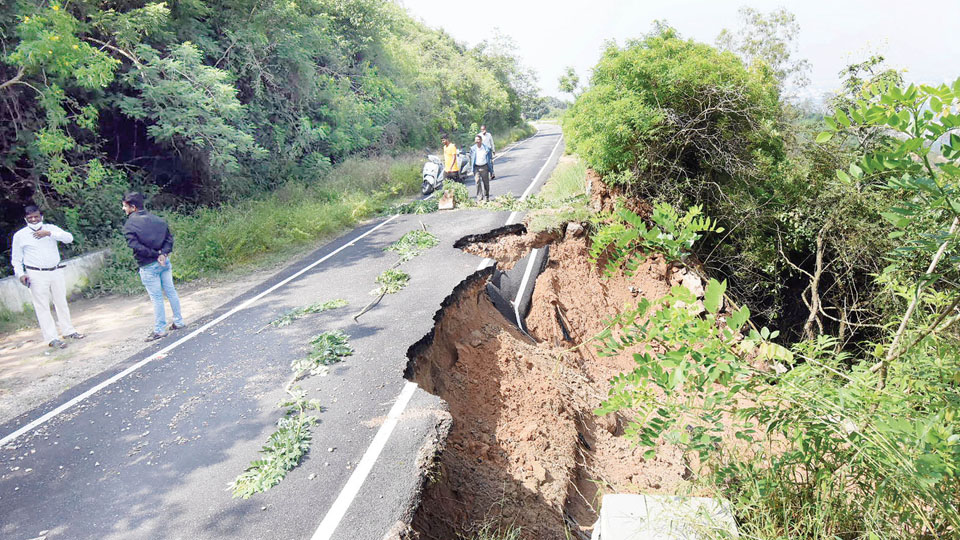 Mysore/Mysuru: Two years after a major landslide was reported atop the Chamundi Hill near the Nandi Statue, one more landslide close to the same area last night has spread panic among residents, commuters and devotees. Along with the slid land, a portion of the road too has collapsed indicating weak earth in that area.

Due to heavy rains that have been lashing on Mysuru since the last fortnight or so, soil had become loose resulting in the collapse of the retaining wall. The latest place where the landslip occurred is near the illuminated ‘Welcome’ erected for Dasara, a few metres from the place where the 2019 landslide had occurred.

In fact, in 2019, the land came crashing down on Oct. 22 and later, a retaining wall was constructed at a cost of Rs. 49 lakh and no tenders were called for the work as it fell under “emergency works” category. The constructed retaining wall is 35-metre wide and 6-metre high and covers all portion of the  land that had caved in.

The 2019 landslide was measured as 50 ft. in length and 22 ft. deep. Though the latest data of the present landslide is not available as of now as the officials are busy clearing the mud and measuring the damaged area, the State Government has ordered immediate repairs that will start from tomorrow.

The landslide occurred last night and yesterday itself, the District Administration and the Police got into action and barricaded the stretch. The road between View Point and Nandi Statue has been closed for vehicular traffic. Vehicles have been asked to take regular route to reach Sri Chamundeshwari Temple and alternative Road to Nandi Statue.

In a communiqué to the Deputy Commissioner Dr. Bagadi Gautham, Mysuru District Minister S.T. Somashekar has asked him to take immediate measures for repairs and close the traffic to prevent loss of life. The Administration has been directed to complete the works on a war footing to make way for devotees and tourists.

Asking the PWD to clear the rubble and begin work immediately, the DC has asked them to survey the entire Hill to identify other vulnerable spots before it collapses causing losses to lives and limbs. Harsha told Star of Mysore that works will be taken up from tomorrow and like in 2019, tenders will not be called as it falls under the emergency category.   “We cannot see the actual damage as the area is steep and also the mud needs to be cleared. We have already started the ground work and vehicles have been banned as the pressure on the road will lead to more damage. Once the preliminary work is done, an estimate will be made to construct a concrete retaining wall in a scientific manner and in consultation with geologists and soil experts like in 2019,” he added.