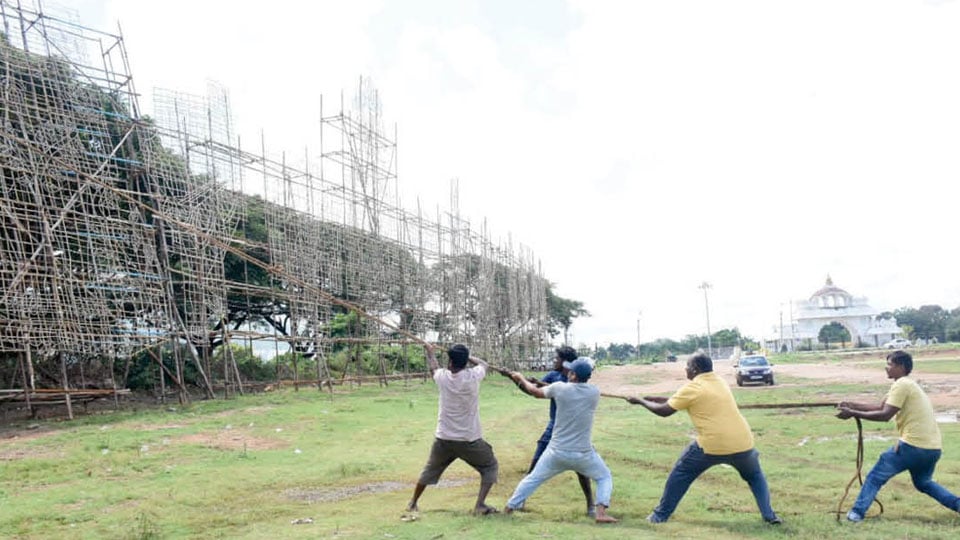 Mysore/Mysuru: Heavy rains that lashed across the city yesterday not only disrupted normal life but also dampened the festive spirit causing disappointment to hundreds of tourists who had come to the city to view Dasara illumination.

Rain began at about 3 pm and it gave a break for some time at about 5.30 pm. But again it started with renewed vigour and lashed till late in the night. The downpour made the roads look like streams causing a lot of inconvenience to motorists.

Yesterday being a Sunday, hundreds of tourists had arrived in the morning and after visiting various tourist spots, they were still in the city to view illumination on prominent roads and Mysore Palace. But rains forced authorities to switch off illumination as a precautionary measure leaving tourists disappointed.

Huge branches of trees near J.K. Grounds and Hebbal and fell on power lines snapping the wires which fell on the ground. Luckily, no one was injured as power was switched off immediately. As the branches fell on the road, traffic was disrupted for some time and the Abhaya team of the Mysuru City Corporation (MCC) cleared them.

Houses in low lying areas such as Kanakagiri, Chamundipuram, Vidyaranyapuram, Gundu Rao Nagar, J.P. Nagar and Shivarathreeshwara Nagar were flooded with sewage-mixed rain water and the residents had to spend a sleepless night removing water from their homes.

Meanwhile, a few roads resembled small streams as rainwater unable to flow inside clogged drains flowed on the road, bringing weeds, plastic covers and garbage along with it on the roads. Highway Circle and Jodi Thenginamara Road looked like lakes as water remained stagnant on the road.

The India Meteorological Department has predicted scattered to heavy rainfall across the State for a few more days. Dr. P. Prakash, Senior Farm Superintendent, Gramin Krishi Mausam Sewa at Organic Farming Research Station at Naganahalli near the city said that moderate rainfall is predicted today and tomorrow in Mysuru and surrounding places. He said that 15 mm rain was predicted today and 13 mm tomorrow.

Rainfall recorded in taluk The Statistical Department at the Deputy Commissioner’s Office has recorded 19.63 mm rainfall in Mysuru taluk, 27.5 mm in Nanjangud, 27 mm in Narasipur, 0.7 mm in Hunsur, 13.58 mm in K.R. Nagar, 2 mm in H.D. Kote, 26.83 mm in Periyapatna and 2.2 mm rainfall has been recorded at Saragur.