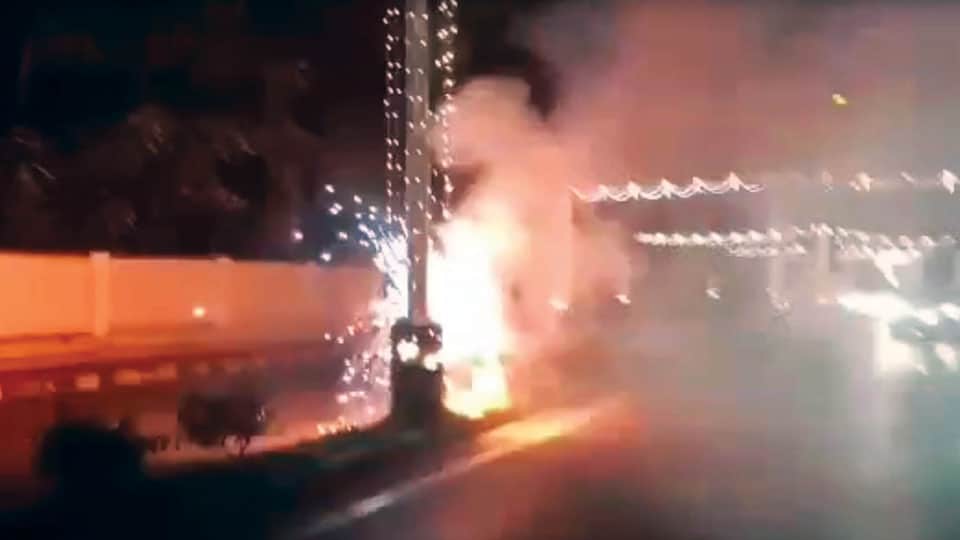 Illumination switched off as a precaution; People head home disappointed

Mysore/Mysuru: Rave reviews are being written about the illumination in Mysuru in both online and offline media and last evening, more than usual crowds poured onto the roads to see the lights. However, heavy rains dampened the spirits as the illumination was switched off as a precautionary measure.

Short circuits were reported in several areas and sparks were spotted at many places including JLB Road and Ramaswamy Circle. At JLB Road, a huge spark accompanied by sounds resembling a welding unit was observed. Public and survey teams from Chamundeshwari Electricity Supply Corporation (CESC) alerted the authorities about sparks at various points.

To avoid any further damage, the CESC authorities decided to turn off the lights. This, however, disappointed the people who had come with their families, cameras and binoculars to see the illuminated roads.

Many complained that the contractors used cheap China-made bulbs and wires for illumination and as such, sparks were observed due to substandard quality. CESC officers, however, quickly denied it. It was common for sparks to fly during rains and this was the reason why the lights were switched off, they reasoned.

Amidst rain too, many people had come to see the illumination and were spotted clicking selfies. “So, the great thing is for the show, our technology and all that stuff is great, but for the safety of people, we just want to make sure that everyone has the ultimate experience. So we have decided to switch off the lights. Only limited areas were lit up and those too were turned off later,” said Dasara Illumination Sub-Committee Secretary B.K. Yogesh, who is also the CESC Executive Engineer.