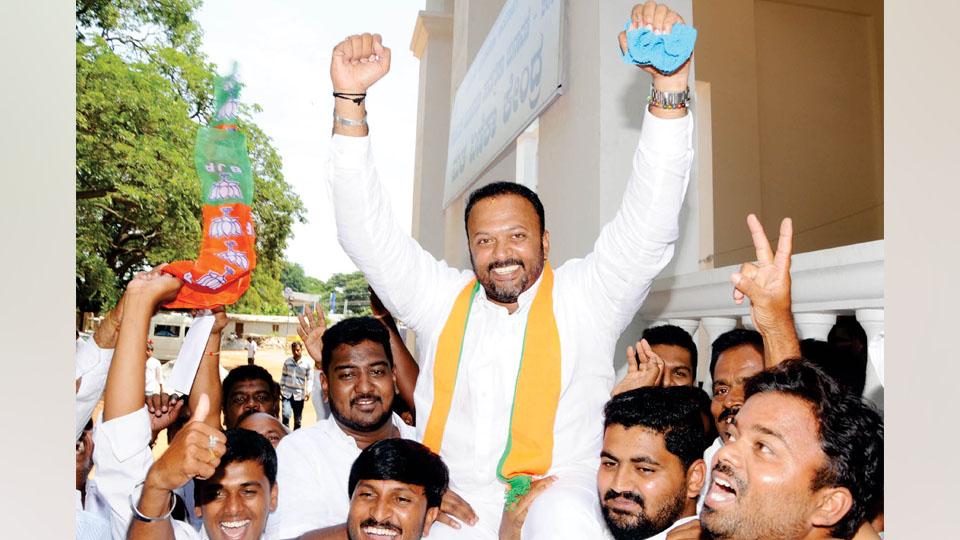 Lotus blooms in Nanjangud for the first time since 1957

Mysuru:  The Temple Town of Nanjangud, also known as Dakshina Kashi, has chosen BJP candidate B. Harshavardhan as its MLA for the first time since 1957. Traditionally, the Constituency has been a bastion of Congress, Janata Party and Janata Dal.

The Nanjangud (SC Reserved) Constituency became the centre of political attraction last year as the Assembly segment went to by-poll in April 2017. The poll was necessitated following the resignation of sitting MLA V. Sreenivasa Prasad, who quit the Congress after being unceremoniously dropped from the Siddharamaiah Ministry in the Cabinet reshuffle held in mid-2016.

Keshavamurthy, who was brought into Congress fold from the JD(S), had won the last by-election by defeating Sreenivasa Prasad. After the defeat, Prasad had announced that he would retire from electoral politics but remain in active politics. 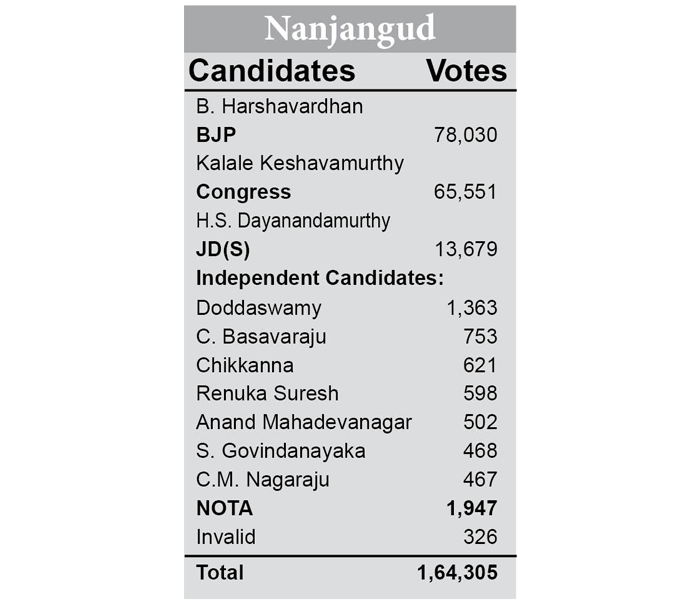 After the poll dates were announced, the BJP decided to field Harshavardhan, and initially, political pundits had predicted an easy victory for Keshavamurthy. But Harshavardhan proved them wrong and won the elections.

Speaking to Star of Mysore yesterday after his victory, a jubilant Harshavardhan said that he attributes his victory fully to his father-in-law Sreenivasa Prasad. He said that he went to the people promising that he will turn Nanjangud into a model constituency and the people supported him.

“All credit goes to my father-in-law and the party workers. As soon as my candidature was announced, party workers started connecting with the people and they ensured that the BJP message reached every household. There was an anti-establishment wave against the Congress and it is the acceptance of pro-people policies initiated and implemented by Prime Minister Narendra Modi and our State BJP President and former CM B.S. Yeddyurappa,” he said.

READ ALSO  JD(S) may part ways with Congress in MCC

Soon after the by-elections in Nanjangud, Harshavardhan was appointed as BJP State Yuva Morcha Vice-President.

Grandson of late B. Basavalingappa, a former Karnataka Minister, Harshavardhan, who resides in Bengaluru, is a BE graduate (Institute of Engineering and Management).

On his plans for the Constituency, Harshavardhan said that development is the focus of his party and he will follow the same principle. “While other parties divided the society on the lines of caste, BJP fought the elections on development agenda. I will develop my Constituency as a model one,” he added.