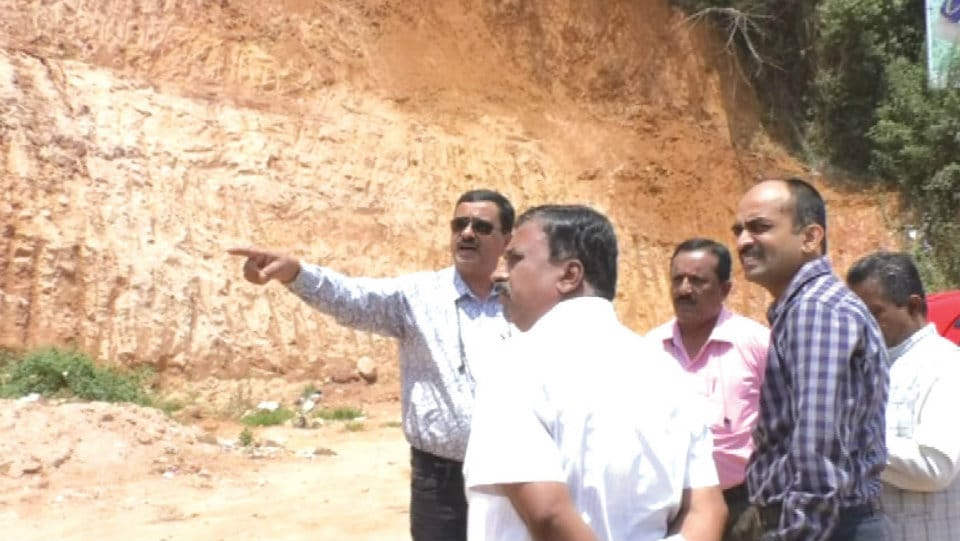 Madikeri: With the State Government proposing to develop the flood and landslide-ravaged old private bus stand at Madikeri Town into a popular tourist spot to be named as ‘Madikeri Square,’ various officials inspected the site  on Tuesday.

Tourism Minister S.R. Mahesh, who has given nod for this ambitious tourism project, which upon completion is expected to attract a large number of tourists, is now expecting a detailed report from the officials on the salient features of the project.

In this backdrop, Tourism Department officials visited the spot on Tuesday to come up with a blue print of the plan. They are expected to make an estimate on the safety aspects of the site and the cost of the project.

As a preliminary step, the officials have sent mud samples to testing laboratories for the safety of the site. Following public demand for developing the spot, the Madikeri CMC too has joined hands with the Tourism Department in developing ‘Madikeri Square.’

It may be recalled S.R. Mahesh, who is also the Kodagu District Minister, after taking note of suggestions made by Star of Mysore Editor-in-Chief K.B. Ganapathy in his column ‘Choomantra,’ published in Mysooru Mithra, sister concern of SOM on Nov.1, 2018, held talks with the then Deputy Commissioner P.I. Sreevidya, City Municipal Council (CMC) President Kaveramma Somanna and former City Municipal Council President Nandakumar. The Minister had given the responsibility of preparing a blue print to construct a ‘heritage spot’ to the local administration.

In his article, Ganapathy had also mentioned about Trafalgar Square at the centre of London City and had mooted the idea of a ‘Public Square’ at the old private bus stand space in honour of India’s first and the one and only Commander-in-Chief Field Marshal K.M. Cariappa, who hails from Kodagu.

Tourism Minister Mahesh, who has evinced keen interest in this project, is said to be awaiting a report from the Department officials. He is expected to take a decision on the project after he receives the report, it is learnt.