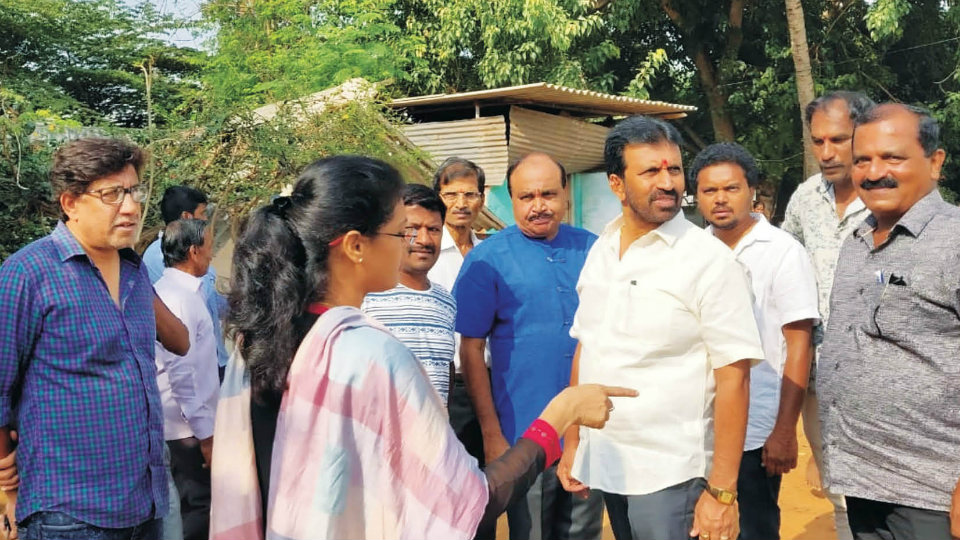 Mysuru: The long-pending issue of residents of Vijayashreepura coming under Chamundeshwari and Chamaraja Constituencies, who are facing the danger of losing their houses, came to the fore again on Sunday at a meeting of residents with Chamaraja MLA L. Nagendra. On his part, the MLA assured the residents that he will exert pressure on the Government to find a speedy solution to the vexed issue.

The MLA on Sunday met the members and office-bearers of Vijayashreepura Kshemabhivruddhi Sangha that is spearheading a movement to save the houses from being demolished.

Airing the woes of the residents before the MLA, Dr. Ranganath, President of Vijayashreepura Kshemabhivruddhi Sangha, said that out of 419 houses and 125 sites, the Mysuru Urban Development Authority (MUDA) had issued regularisation notices to 285 properties (houses) and had even accepted regularisation fees from the residents.

Dr. Ranganath contended that Vijayashreepura was a part of Government land since 1899 and even the Mysuru District Administration had declared it as ‘B-Kharab’ (Government land). He argued that as the Government had plans to develop a residential layout at Vijayashreepura, the houses already built must be considered as part of the layout and they must not be demolished.

The MLA said that the MUDA Commissioner has already submitted a report to the Chief Minister and the proposals have to be placed before the Cabinet. “The process is stalled since the Election Model Code of Conduct is in force. I have already held talks with Mysuru District Minister G.T. Devegowda and I will urge him to bring the issue before the Cabinet at least by the end of this month,” he said.

Nagendra said that he will prevail upon Urban Development Department Secretary to prepare documents regarding the layout, its present state and previous developments to be placed before the Cabinet. “The land issue had come up before the Courts earlier and the issue can be resolved at the Government level as it can pass a Government Order regularising the lands and bring relief to hundreds of residents who have already built houses. To regularise the land, the Government can take regularisation fees from the residents,” he said.

Dr. Ranganath told the MLA that the residents were deprived of basic facilities including streetlights and underground drainage. “Almost a year has gone waste in the election to Lok Sabha and Local Bodies and there is a time crunch to take up long-pending issues. Despite this, we will strive to bring a solution to Vijayashreepura land issue,” Nagendra said.