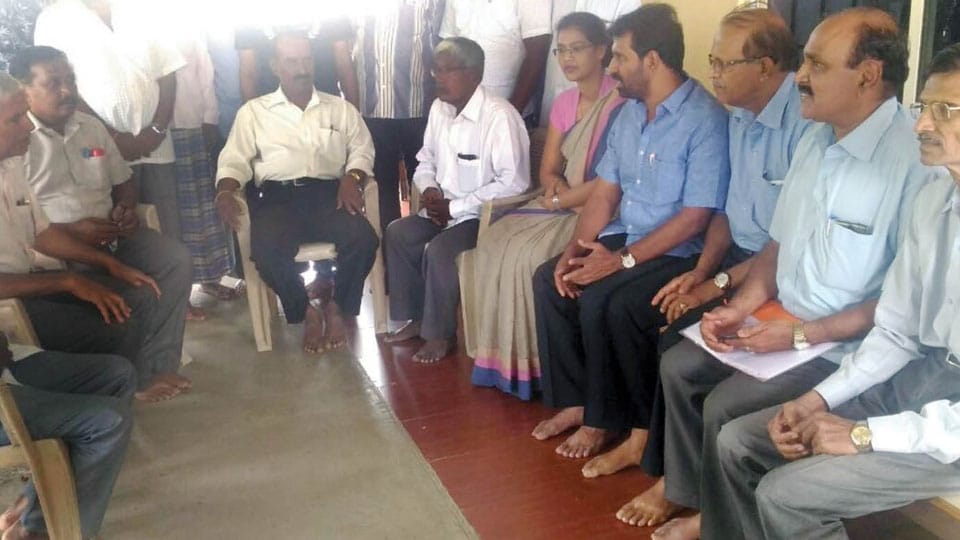 Mysuru:  Hundreds of residents of Vijayashreepura that comes under Chamundeshwari and Chamaraja Constituencies, are facing the danger of losing their houses as the High Court (HC) has dismissed the pleas of residents and said that the Supreme Court (SC) order on demolition of houses will stay. The Apex Court had asked the High Court to adjudicate the case.

The HC ruling came yesterday and it was delivered by a Bench comprising Chief Justice Dinesh Maheshwari and Justice Devadas. The Apex Court, on Dec. 16, 2015, had ordered demolition of the buildings in Vijayashreepura. Following a batch of Writ Petitions and Interlocutory Applications filed by the residents in SC and HC, the Supreme Court had asked the High Court to hear and adjudicate the cases.

Following Court development, residents of Vijayashreepura held a meeting this morning at the house of Dr. Ranganath, President of Vijayashreepura Kshemabhivruddhi Sangha, attended by Chamaraja MLA L. Nagendra. Addressing the meeting, Dr. Ranganath said that they will have to file a review petition in the High Court and at the same time, approach the Supreme Court and inform the Judges about the High Court ruling.

REGULARISATION NOTICES: Out of 419 houses and 125 sites, the Mysuru Urban Development Authority (MUDA) had issued regularisation notices to 285 properties (houses) and had even accepted regularisation fees from the residents. “There are several wrongly interpreted clauses in the case and we will file a review petition through a senior advocate in the High Court. Also, there is an Interlocutory Application pending in the Supreme Court and we will have to apprise the SC about the HC order,” he said.

Dr. Ranganath explained the case history to the MLA and requested him to influence the State government to save the houses from being demolished. “MLAs Nagendra and G.T. Devegowda can bring government support to us as it is a government land stuck in legal tangles. Also, the government advocates can argue our case in SC and HC,” he opined.

DELEGATION TO MEET CM: Giving a patient ear to the residents, Nagendra said that he will arrange a meeting with the residents and Chief Minister H.D. Kumaraswamy when he (CM) comes to Mysuru on Sept.11. “If that meeting does not materialise, I will lead your delegation along with G.T. Devegowda to Bengaluru and meet the CM for a speedy redressal of the issue,” he said and asked the residents not to panic.

LAND TANGLE: The land extends up to 94.28 acres and comes under Survey No. 1. It is owned by K.B. Ramachandra Raje Urs, son-in-law of Jayachamarajendra Wadiyar. The property was later inherited by Chaduranga Kantharaj Urs and his sisters Tripurasundari Devi, Deepamalini Devi and Keerthimalini Devi. Ramachandra Raje Urs had divided the property into five parts and distributed among his children and kept one part to himself. Later Chaduranga Kantharaj Urs divided his share of property among his children Devrath Urs and Jayalakshmi.

The then City Improvement Trust Board (now MUDA) acquired the 94.28-acre land abutting Manasagangothri, the PG campus of University of Mysore in 1984-85 (final acquisition in 1988) which was questioned in the Court by Chaduranga Kantharaj Urs and his family as MUDA failed to pay compensation.

DEMOLITION ORDER: Later, MUDA allotted 15 acres to JSS Mahavidyapeetha. Out of the remaining 79.28 acres, 23.5 acres was developed as Vijayashreepura Layout. Hearing the petition filed by Chaduranga Kantharaj Urs, the Apex Court, on December 16, 2015, had ruled against the acquisition of the land by MUDA and had set a deadline of six months for demolition of houses.

MUDA then appealed in June 2016, stating that it needed more time and the SC extended the deadline till Sept. 15, 2016 after which the demolition would be taken up. The SC demolition order, however, has not been implemented following appeals from residents. The SC also later provided a concession to JSS Mahavidyapeetha as it was an educational institution and the same yardstick could not be applied to the Vijayashreepura residents. Regarding the Vijayashreepura Layout, the Supreme Court had asked the Karnataka High Court to adjudicate the issues as there were several petitions filed by Vijayashreepura Kshemabhivruddhi Sangha.