Home » News » This man is living atop a mango tree since two years! 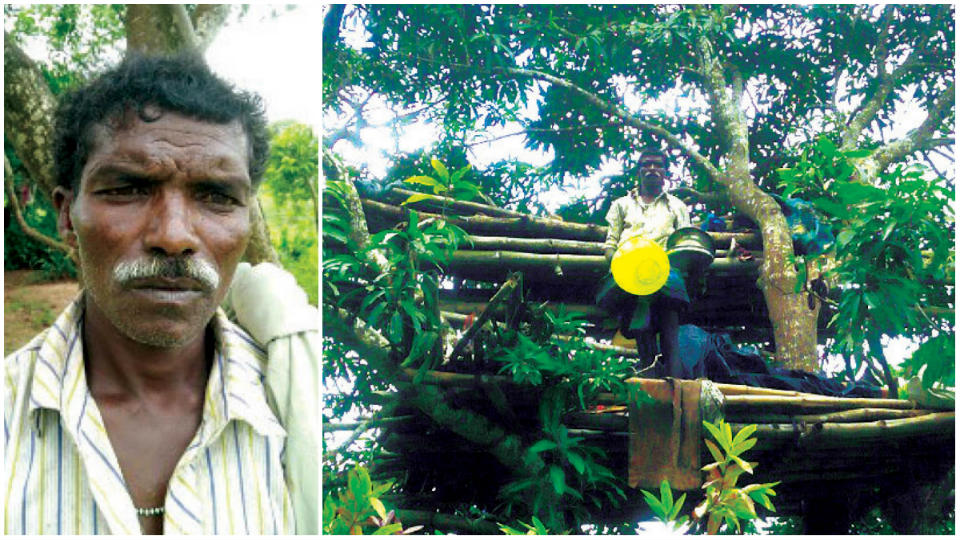 This man is living atop a mango tree since two years!

Periyapatna: Every one of us would like to live on tree-tops for one or two days, far from the madding crowd and hustle and bustle of the city.  But what if you are forced to live atop a tree, 365 days and 24/7, that too under the threat of wild elephants?

Here is a man from Periyapatna who has been living atop a mango tree since two years, fed up with the harassment meted out to him by some officials from the Forest Department.  He has been living literally like a tree-animal as he has no other shelter and many times, wild elephants have tried to pull him down from the tree.

The hapless man is Gejja, a Jenu Kuruba tribal from Malaganakere tribal haadi in Periyapatna taluk. He has no money to build a house and also no help from the authorities.

Gejja, son of Muthayya, was living in a hut for more than 50 years at Malaganakere haadi in Naviluru village. However, he became homeless when Forest Officials pulled down his hut in the name of erecting solar fences. They also dug a trench and put up solar fencing, restricting the movement of 24 families, including Gejja.

Among the 24 families, only Gejja belongs to Jenu Kuruba Tribe and the rest are from Soliga community that  depend on forest produce for livelihood.

Left with no other option, Gejja started living on a mango tree which was planted by his grandfather on his field. He managed to bring bamboos from the  forest and created a shelter atop the tree to save himself from   wild animals.

He cooks food before the sunset and takes his belongings, including utensils, vessels and others, to the tent erected on the 40-ft tree. His wife Shobha works as a maid at a house at Rani Gate. She can’t climb the tree and she lives at the landlord’s house. His older son Kulla is married and working in a nearby estate and second son studies at a school.

“I wanted to build a house in the land sanctioned to tribals by the Government (he has not got Title Deeds for the land yet as promised by Revenue  Officials) but the Forest Department officials did not allow this. With no alternative, I have built the house on top of a mango tree that has been planted by my grandfather,” Gejja told Star of Mysore.

Gejja claimed that though the Government had sanctioned land, Title Deeds have not been issued as there is objection by the Forest Department.

“The Naviluru Gram Panchayat Officer has told us that it was not possible to  grant land as the Forest Officials would object. But he has given me Aadhaar Card and Ration Card,” Gejja said.

“I have faced death on many occasions when wild elephants pulled down branches of the tree I live in,” he said and appealed to the authorities to let him live in peace with his family. He said that he was ready to live elsewhere if land was granted to him.

According to Forest Officials, they cannot allot Gejja a site or allow him to construct a house as he lives inside the forest and there is scope for rehabilitation if he is ready to move out.

“I have been asked by the Department seniors to prevent encroachment of forest land and he has to be allotted land away from the forest area,” said Range Forest Officer Girish Kumar.

Assistant Director of Social Welfare Department Chandrappa said that Gejja’s plight has been sent in a report to the Government. “We have submitted a detailed report on the harassment meted out to Gejja from the Forest Department and we are awaiting an order from the Government,” he said.