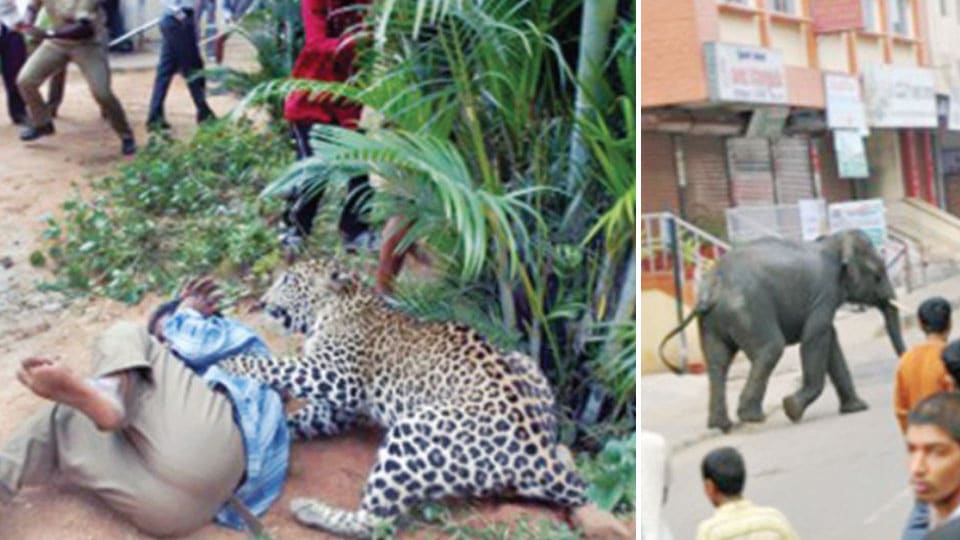 On Thursday, a leopard cub crossed over to the Zoo from Chamundi Hill and for once was captured without much harm or chaos. As reports of elephants, tigers and leopards coming in contact with humans is increasing day by day, it is clear that man-animal conflict is here to stay and is only going to get worse.

Earlier this year, in August, the Environment Ministry reported that 1,144 people were killed between April 2014 and May 2017 in man-animal conflicts. That translates to one human death every day!

Even in non-urban areas, animals are foraying outside their territory for food and water as forests are not protected and scientifically managed. In Kodagu and Chikkamagalur districts, the joke among coffee planters is that they celebrate Diwali every month as they burst crackers often to scare away the elephants in their estates.

Interestingly, some coffee planters claim while elephant raids are a burden for them it is a bonanza for the forest officials. Because, every time the Forest Department chases elephants from the estate they get paid extra. So they just chase the herd to the next estate instead of all the way back into the forest.

The elephant menace is so rampant that former MLC M. C. Nanaiah, frustrated with the government’s inaction in dealing with the elephant menace, told the Leaders present in the House: “You will come to know about the seriousness of the problem only if a herd of eight to ten wild elephants enter the Vidhana Soudha when the Legislature is in session. When you are stranded and cannot go back to your houses in the evening, you will realise the seriousness of the problem.”

Now, many estates in these districts are cutting down jackfruit trees and banana plantations, hoping that elephants will not enter their estate, discouraged by the absence of their favourite food. But alas, the elephants have started developing a taste for ripe coffee berries.

But there is a silver lining…the Civet cat coffee is said to be the most expensive coffee in the world. Civet coffee beans are collected from the droppings of the Civet cat, which consume coffee berries but can only digest the flesh and poop out the bean. Maybe, coffee planters in Kodagu and Chikkmagalur will soon sell exclusive Indian Elephant Coffee!

For now, the only hope for an implementable plan from the government will be if elephants stray into Mandya and enjoy some juicy sugarcane. Because when Mandya erupts, Vidhana Soudha wets its pants and pulls up its socks.

Don’t shoot, just get them high!

Every time an animal is on the run, a central figure appears in the “operation,” the tranquilliser shooter. And quite often he brings in the comic element to the drama.

A few years ago when officials tried to capture the leopard that had strayed into K.C. Nagar on Chamundi Hill Road, the guard was not used to the gun and misfired.

Next, when elephants entered the city, they got the dosage wrong and it took several shots to bring the elephant down. This repeated firing made the elephant run amok causing damage.

In the late 1980s, a rather large Chimpanzee named Max escaped from Mysore Zoo and immediately made the Sports Club on Lalitha Mahal road its home. As the Zoo workers chased him, he soon settled down on the terrace of a house in Siddhartha Layout.

Back then Siddhartha Layout was not completely built up, so the house the chimpanzee chose did not have houses around it. Then the Zoo Director C. D. Krishnegowda brought three elephants, surrounded the house, keeping the Chimpanzee under house arrest. Meanwhile, since there were no tranquillisers available, the Zoo workers placed some food and water laced heavily with India’s favourite “Holi drink” — Bhaang.

The tired Chimpanzee, which consumed the food, was soon all ‘bhaanged-up’ and went to sleep. The Zoo officials then came in the morning and captured him. Max lived for a long time after that heady night and even went on to father a son named Vali, who died in 2013.

Thursday, the leopard cub was captured without any chaos. He was unhurt, but we can’t say the same for the next cub that strays into the city.

For now, man-animal conflict will only increase as our lust for land continues to spread like cancer destroying plants and animals alike. Yes, man will always win, but it will be an unworthy victory.