Home » News » Man walks with earphones; jumbo throws him to death like a toy 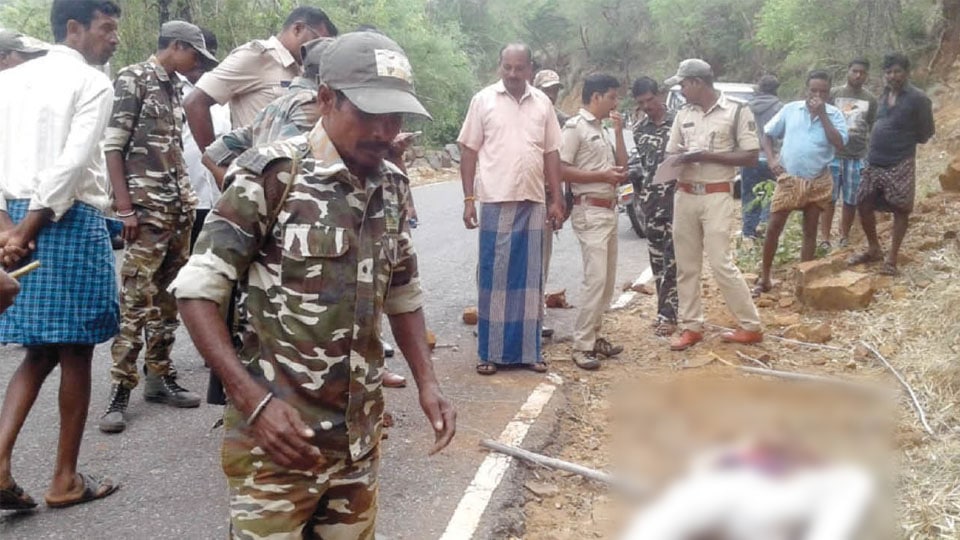 Man walks with earphones; jumbo throws him to death like a toy

Forest Department staff, who rushed to the spot, shifted the injured to the Public Health Centre (PHC) at M.M. Hills, where he was provided first-aid and was later shifted to Kollegal Hospital where he is said to be out of danger.

Yesterday, a devotee from Malavalli was killed, when a wild elephant caught him and flung him aside near Ponnachi Gate coming under M.M. Hills Wildlife Division.

After having the darshan of Lord Mahadeshwara atop M.M. Hills, the devotee, identified as Babu, came near the check-post at about 1.30 am and boarded a goods vehicle. After getting down at Ponnachi Gate, the devotee was walking towards Talubetta. He was wearing headphones and was listening to music.

Meanwhile, a wild elephant which was standing nearby trumpeted loudly, but the devotee was neither able to hear it as he was wearing headphones and listening to music nor was he able to see the elephant as it was dark. As he went near, the wild elephant caught him in its trunk and threw him aside. The devotee died as his head banged hard into the concrete wall of a small bridge.

Though the incident took place between 2.30 and 3 am, the wild elephant stayed near the body of the deceased till about 6.30 am without doing anything. Meanwhile, Forest Department personnel, who rushed to the spot, burst crackers and drove the wild elephant away.

Meanwhile, M.M. Hills DCF V. Yedukondalu said that the incident took place inside the forest and hence there was no provision to provide compensation and added that he would discuss this with the officials concerned. He has urged the devotees coming to M.M. Hills not to venture out in the forest either alone or in group especially during dark.