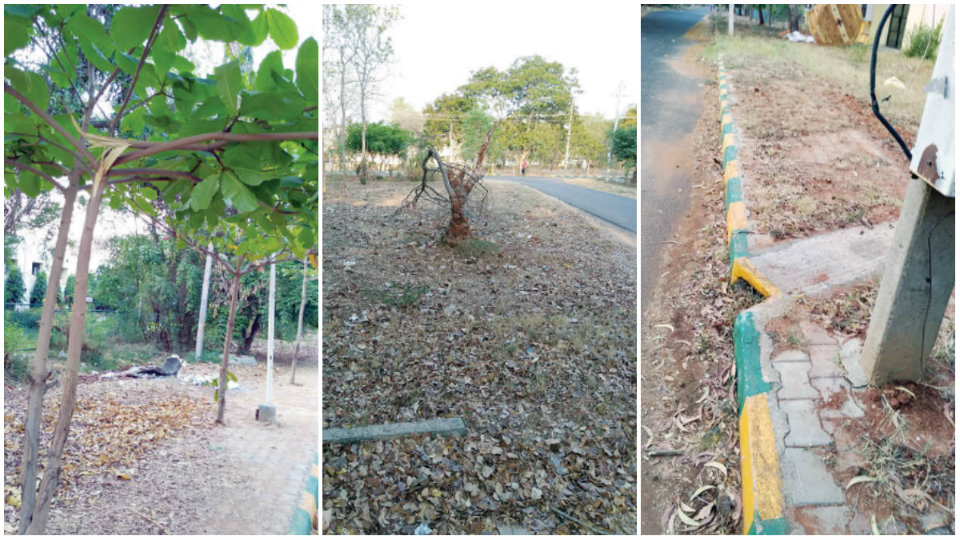 It is with great concern and pain that I am bringing  to the attention of the readers of Star of Mysore the sorry state of Manasagangothri Campus, which is gradually losing its campus beauty. After spending thousands of rupees very recently to give a kind of facelift, the entire campus is rather suffering from certain dereliction from the authorities concerned.

There are some village women regularly breaking the branches of healthy trees (see pic.) deliberately to cart them home when they wilt and die.  A few months later the entire tree appears like a ghost with its worn out structure grotesquely looking skywards (see pic.). Very sad to see this with the uniformed sentries wandering around oblivious of such vandalism.

The money of the tax-payers has gone down the drain, with  zero maintenance as you can see on many walk paths, grass and shrubs completely covering the newly-laid interlocking bricks. Where was the need to waste funds ?

The garbage (mindlessly thrown around after parties and functions) in the vicinity of many Departments and under the stone benches around the great tree under which the Buddha is meditating is definitely an eye- sore.  Manasagangothri draws eminent Professors and Vice- Chancellors (who have served Mysore University gracefully for decades), for their early morning walks along with many persons of high repute. Won’t these persons of grace and dignity suffer silently because some people are careless about their responsibilities? What kind of mental hygiene and educational goals the students will imbibe in such an ugly environment ?

Also see the picture of how beautifully a campus is maintained in one of the foreign Universities which I visited during my overseas trips.

As an old alumnus of Manasagangothri, I appeal to the authorities concerned, with folded hands to bring some freshness to the great University known all over the world for its values.