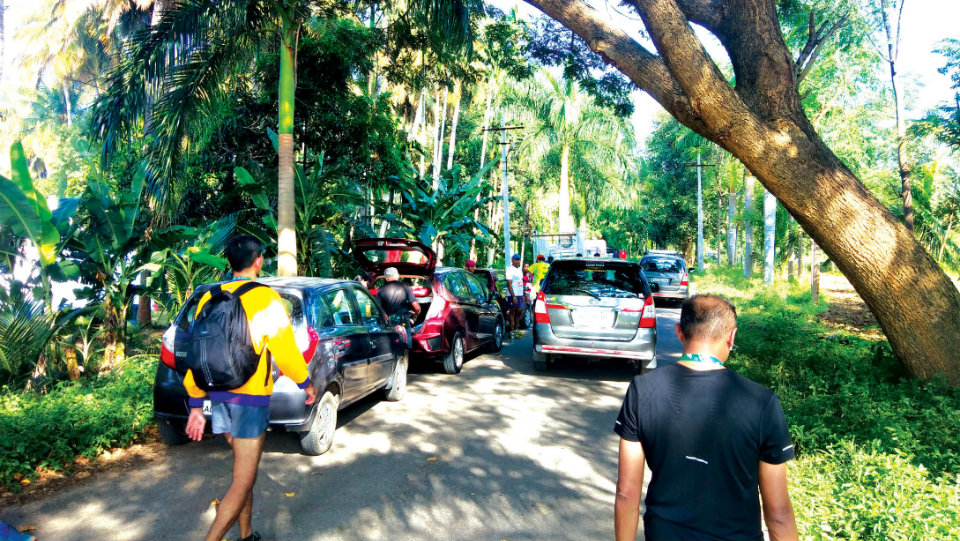 Srirangapatna Police officials told Star of Mysore that the marathon organisers had not taken written permission from them which is mandatory for an event of this scale. However, inside sources said that the organisers had conveyed orally to the Police that they were organising the event. Even permission was not sought from Cauvery Neeravari Nigama Limited (CNNL) that manages the canals around Srirangapatna. This was confirmed by CNNL Assistant Executive Engineer Thimmegowda.

The marathon was organised by the NGO and over a thousand participants had come from Bengaluru and other places to Srirangapatna in the wee hours. Armed with banners, tents and other equipment, the event organisers asked the participants to park their vehicles on both sides of Palahalli-Kannur Road, Ranganathittu Bird Sanctuary Road that touches Balamuri and other smaller roads connecting villages in the surroundings. In all, over 10 kilometres of roads were blocked.

While parking on both sides of the road inconvenienced other regular vehicles that had to carefully manoeuvre on the already narrow road, at some stretches, it became impossible for two cars to pass simultaneously from opposite sides. The organisers had pitched in many temporary toilets and had set up water and refreshment counters all along the roads, causing further trouble.

After their marathon, runners squatted on the road and some even stretched their bodies on the road leaving no space for other vehicles to pass. They had to continuously honk to clear the roads. Hundreds of farmers take out their vehicles and bullock carts in the morning to work in their fields as this is agricultural season. Transporting goods from one place to another became a difficult task for them.

The event organisers had even pitched tents on some mud roads near the Chikkadevaraya Canal while participants cooled off taking bath inside the canal. Villagers said that swimming in the canal is dangerous as the water released from the Krishna Raja Sagar Dam will be in full force.