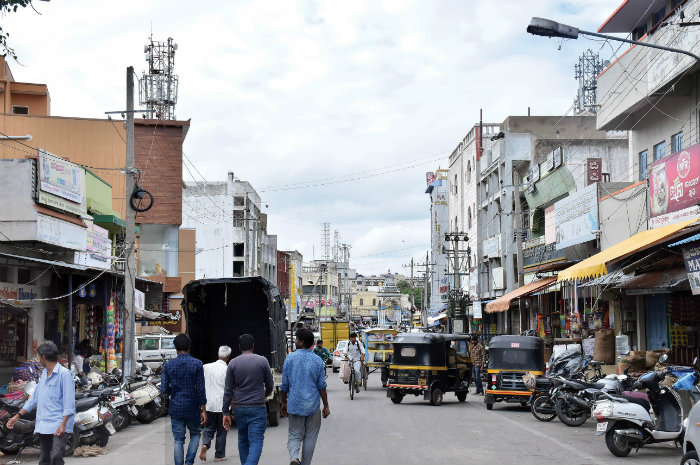 Mysuru, the Cultural Capital of Karnataka and a home for some of the oldest and historical structures, is a known thing. But not many know that the city is also a home for some of the oldest markets. One such place is Old Santhepet bang behind Mothikhane Building on Sayyaji Rao Road. This market has been catering to the needs of the population for over two centuries. A home to some of traditional business houses started way back in 1920s, Santhepet has still retained its old charm that makes people to come here in droves and make a purchase. This Weekend Star Supplement traces Santhepet’s history, its marketonomics (market economics) and re-introduces readers to the marketplace so that they can have some nostalgic memories.

Getting a feel of Santhepet

Every story matters. Located in the heart of the city, Santhepet has a history of more than two centuries. What started as a tiny marketplace outside the erstwhile Mysore Palace Fort has now become the most visited market — a subsidiary market for Devaraja Market.

When compared to earlier days, there is not much activity during the early part of the day as majority of the wholesale shops have now become retail outlets that only open after 8 am. Earlier, Santhepet was a wholesale hub where merchants sold different varieties of red chillies, tamarind, rice, pulses, detergent powders, soaps and other household items.

It used to be open from early in the morning till late in the night. Earlier, the roads surrounding Santhepet were used to park trucks as merchants got goods from Tamil Nadu, Kerala and Andhra Pradesh. Now since the wholesale market is shifted to Bandipalya on Nanjangud Road, old Santhepet seems to have lost its charm. Most of the shops are retail outlets and there are others who sell fruit juice, fertilisers and books.

However, for people who are not aware of Old Santhepet, it is a must visit. One can get a feel of how a market works as still there are a few wholesale shops. Now, the market is lively only during business hours.

Earlier, the market was dominated by merchants belonging to Vyshya, Lingayat and Kunchetiga communities. While merchants of Vyshya community sold wholesale spices, coriander, red chillies, tamarind, Lingayats merchants sold rava items, rice and pulses, Kunchetigas mainly sold jaggery and onion. Now the market is flooded by Marwari traders who have set up all and sundry shops.

“The old market was located in two main streets, one opposite Jaganmohan Palace and the other on its adjacent road leading towards Devaraja Market. There were around 600 shops having loyal customers. If a customer comes here he/she would complete shopping at one single time,” said G. Shreyas of Ranganatha Traders, which earlier operated in Old Santhepet but now shifted to Bandipalya.

The Old Santhepet was a compact market that would deliver supplies as per demand. Goods were only unloaded late in the night. But now since the market was shifted to Bandipalya there are no trucks at Old Santhepet.

For old Mysureans and for people in their late 30s and above, one visit to Santhepet takes them on a nostalgic journey as they still find some of the oldest shops functioning. Though there are only a handful, people remember visiting shops with parents to buy groceries.

Among the oldest shops are K. Nandi Basappa & Sons and B.S. Basavanna & Sons, which started in 1920 by Nandi Basappa and Bengaluru Subbanna. Both the businessmen were honoured with titles ‘Dharma Rathnakara’ and ‘Dharma Pravartha’ by the then King Jayachamaraja Wadiyar recognising their contribution to trade and commerce. Now the business is run by the family’s third and fourth generations.

B.R. Nandish, Managing Partner of K. Nandi Basappa & Sons, said that earlier days food grains and pulses to Mysuru were procured from North India and transported to merchants through bullock carts. “While goods procured from North India were brought to old Santhepet, locally grown fruits and vegetables were sold at New Santhepet, now old RMC, at Bannimantap,” he added.

“The market has undergone a sea change over the past few years. People used to come looking for our shop. But now, things have changed. At present, online market is reaching out to customers. Fortunately, we have been successful as we have adapted to new market economics,” said Ajay Kumar, Proprietor, B.S. Basavanna & Sons.

Another important businessman from Santhepet, who has contributed to Mysuru’s development, is Dharma Rathnakara Banumaiah. He was bestowed the title ‘Dharma Rathnakara’ by the then Maharaja of Mysore recognising his contribution to education. D. Banumaiah’s Educational Institution was founded as a Trust in 1919 by Rao Bahadur Sahukar D. Banumaiah to provide education to poor children. Though born to a poor family, Banumaiah grew up to become a successful businessman.

When a canal transforms into a market

History of Santhepet dates back to 1799 when the reign of Mysore Kingdom returned to Wadiyars from Tipu Sultan. The Old Fort that was demolished by Tipu was reconstructed in 1802. The Fort housed an entire township with 8,000 families inside.

The township had separate streets that sold flowers, vegetables, fruits, utensils, clothes and gold jewels. At this point of time the then Dewan of Mysore Poornaiah, in an effort to bring River Cauvery water to Mysuru, gets a canal constructed from Anandur, now in Srirangapatna Taluk. This canal is the present ‘Poornaiah Naale’ or ‘Poornaiah Canal.’

Since Mysuru is on a higher altitude than River Cauvery water level, the canal reached a depth of 70 feet by the time digging work reached Dufferin Clock Tower near K.R. Circle. Later it was decided to stop digging as it would not serve any purpose and would harm the township. However, water had already reached Dufferin Tower. Though it did not serve its actual purpose, it helped the vendors, who came to the Fort from surrounding villages with vegetables and goods, in their morning ablutions.

Farmers, who cultivated vegetables, fruits, flowers, cereals and pulses in surrounding areas used bullock carts to transport goods to Mysore Fort Township. They arrived early in the morning when the doors of the township were closed. As such they had to wait outside till sunrise.

The villagers used to dump all their goods near the canal and wait. Over the years, though the supply of water to the canal was stopped, people continued to dump goods there. The place later transformed into a temporary market.

READ ALSO  Life in Motion And the show goes on

A single row of shops

During Mummadi Krishnaraja Wadiyar’s rule, the market was started in the then ‘Doddabeedi’; now Ashoka Road. Later, during the rule of Chamarajendra Wadiyar X, Doddabeedi became Doddapete and Santhepete functioned from Devaraja Market to the present D. Banumaiah College.

At this point of time, various Agraharas were formed around the Mysore Fort and the town started to expand further. People, who started to live in new areas, visited the already existing market near the Mysore Fort. Gradually, merchants started selling rice, ragi and other cereals on footpaths. The place slowly became a wholesale market with permanent shops.

It was Chamarajendra Wadiyar X, who helped development of the market by constructing shops and giving them away to merchants. Later, Nalwadi Krishnaraja Wadiyar set up permanent shops in Santhepet.

Most of the merchants, who had shops at Santhepet, were connected to the Palace as they supplied groceries to the Royal Family. Even today, they have retained their loyalty to the royals. Some merchants, who were rich, contributed to the development of Mysore and also patronised art and culture.

With the population of Mysore increasing drastically, Jayachamaraja Wadiyar conceptualised the construction of one more market — New Santhepet. Later, it came to be known as RMC Market. At that time the new Santhepet which started from the now Old RMC Circle (near Muslim Co-operative Bank) extended up to Maulana Abul Kalam Azad Circle (Highway Circle).

Being the parallel road of Sayyaji Road, Santhepet was always buzzing with activities. While the Old Santhepet near Jaganmohan Palace catered to the daily needs of residents, the New Santhepet mostly was used to sell the locally grown flowers and vegetables. However, the wholesale market at Old Santhepet was shifted to Bandipalya during 2002 after new shops were constructed and allotted to merchants.

The Guardian Angel of Old Santhepet

One of the oldest structures located in Old Santhepet is the Prasanna Nanjundeshwara Temple. The temple was reconstructed by the Wadiyars and is believed to be renovated by Mummadi Krishnaraja Wadiyar.

According to priests, the temple was called ‘Gejje Pooje Temple’ as it was frequently visited by Devadasis. Later, the temple was renovated by devotees. The annual Brahmarathotsava or the Car Festival is held on the full moon of Holi.

The temple attracts a lot of devotees on Maha Shivaratri when people residing near Old Santhepet and surrounding Agraharas seek blessings.

The temple premises, spread across 2.5-acre land, is home for other temples dedicated to Lord Ganapathi, Goddess Chamundeshwari, Tanka Rama Mandira, Lakshminarayana Swamy,  Dakshinamurthy, Subramanyeshwara, Chandikeshwara and Goddess Parvathi. The premise also has a Navagraha temple and a Peepal Tree that is believed to be 300 years old.

3 COMMENTS ON THIS POST To “Marketonomics: Getting a feel of Santhepet”