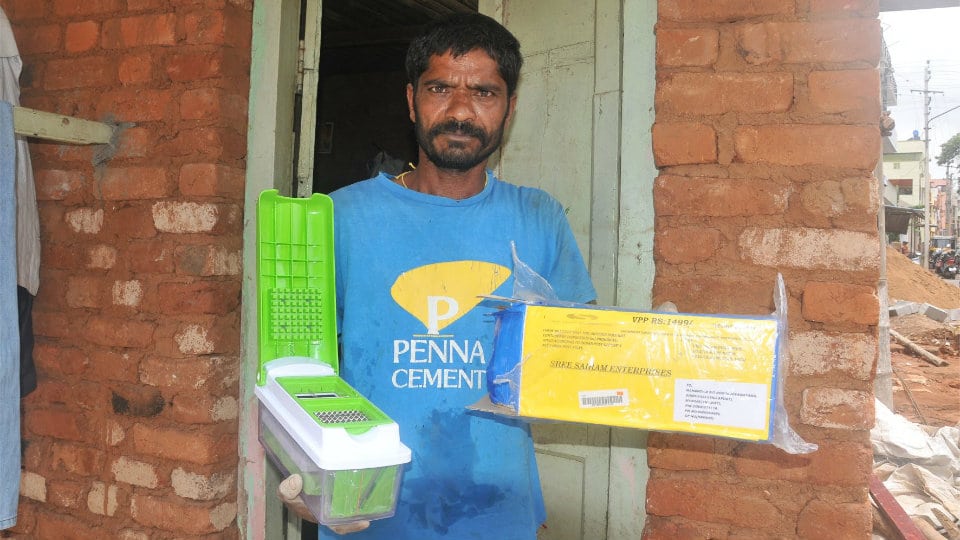 Mysuru: What you would do if a person telephones you and offers you a Samsung Galaxy smart phone, starting from Rs. 12,000 range, a free SIM card and a vegetable chopper for just Rs. 1,500?

Well, it depends on the person who receives the call. If he is shrewd, he will immediately realise that no one will sell a Samsung phone for Rs. 1,500. But here is a man who fell for the trap and ended up losing his hard-earned Rs. 1,574.

On July 24, a woman telephoned Mahadev, a mason and a resident of Sindhuvalli village, and told him that she was representing a marketing company and her firm offered a Samsung Galaxy smart phone, a free SIM card and a vegetable chopper for just Rs. 1,500. She asked him if he was interested in the offer. Mahadev replied in the affirmation and she told him to go to the Sindhuvalli Post Office after two days to collect a Value Payable Post (VPP).

Mahadev later told some of his friends about the offer and they told him that it was a good deal. A convinced Mahadev gave a missed call to the woman’s phone number as directed by her. She told him that the parcel would arrive in two days. When Mahadev repeatedly asked her if her offer was genuine, she blurted out some brand names and gave a guarantee that he could own a smart phone for Rs. 1,500. She even told him that after obtaining the parcel, he could come to Kalamandira to meet her.

Accordingly, Mahadev got a call from the Sindhuvalli Post Office yesterday that he had got a VPP and he had to pay Rs. 1,574 to take it. Mahadev took the money to the Post Office and to his shock, when he opened the parcel he found only a cheap vegetable chopper worth about Rs. 200. There was one slip inside and word “Coupon” was printed on that.

When Mahadev called the woman on the number, it was not reachable.