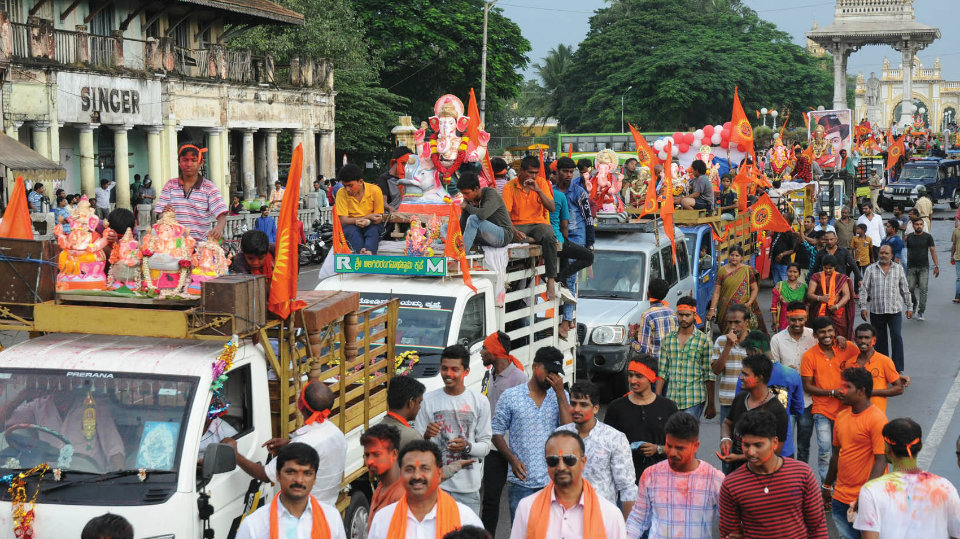 Mass immersion of Ganesha idols passes off peacefully in city

Mysuru: The 15th annual Ganesha procession and mass immersion of idols installed at various places across the city passed off peacefully without any untoward incident in city on yesterday. The mass immersion was organised under the aegis of Mysuru Nagara Samoohika Vinayaka Visarjana Mandali,  Devaraja Urs Road.

They continued the procession through Devaraja Urs Road, JLB Road, Railway Station, Bamboo Bazaar, Bannimantap and reached Srirangapatna where they immersed the idols in the river near Sri Saibaba Temple.

Meanwhile, Police diverted the traffic movement and a  security blanket was thrown all over the city with huge posse of Police personnel along the procession route to prevent untoward incidents. Police pickets were deployed at all sensitive places and heavy contingent was posted at all places of religious importance on the procession route. Closed circuits cameras were also installed at important places to monitor the situation remotely.

At the public function prior to the procession, former Minister and MLA S. A. Ramdas appealed the people to participate in the immersion procession without disturbing the peace and harmony of the city.