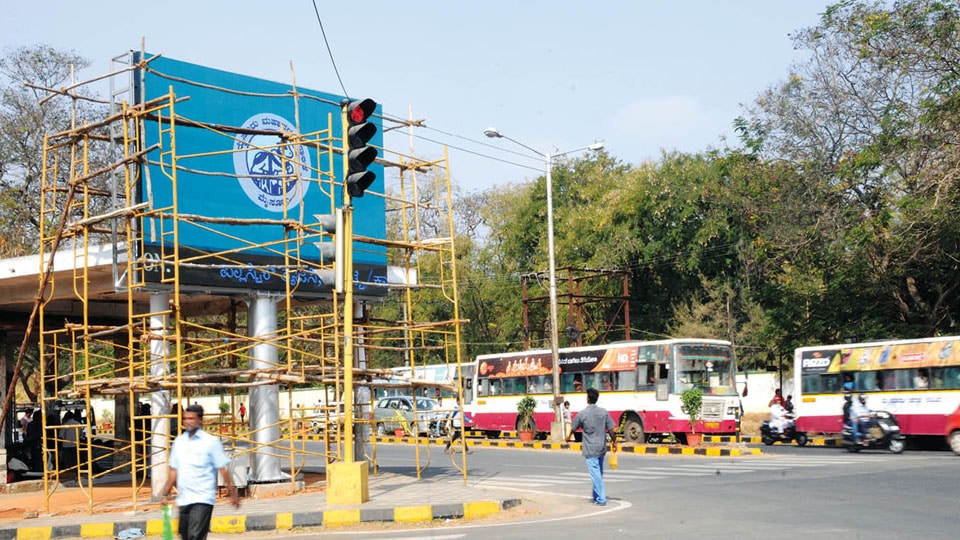 To convey messages on Swachh Survekshan, tourism among others

Mysuru: LED electronic displays are an excellent way of conveying information visually. It directly communicates with the audience, drives home the message in a convincing way and at the same time, the displayed information can be updated at regular intervals.

Realising the efficiency and importance of LED display boards, the Mysuru City Corporation (MCC) has set up five such display boards across the city and is planning to install more such boards.

As of now, messages of Swachh Bharat, cleanliness campaigns and Swachh Survekshan are being relayed through the LED screens. Later, the boards will disseminate information about traffic, Government projects, education and social awareness. These five LED display boards add to the many Variable Messaging Signboards (VMS) installed by the City Police at various vantage points in city to give traffic-related information and about routes, to ensure easy traffic movement.

The boards are of international standards and have been installed by the MCC under its Information, Education and Communication (IEC) programme. Each board costs Rs. 18.8 lakh and is 16.8 ft wide and 11.8 ft high. It requires 5 kilowatt power every day for a bright display.

MCC officers said that the tender for installing such display boards has been bagged by Syed Shami and as per tender norms, the boards will have free maintenance of up to one year and later, tenders will be called for maintenance. Funds for the project have been sanctioned from 14th Finance Commission.

Highly reliable and engineered for ease of maintenance and serviceability, the display boards can be updated on-the-go through mobile app and content, including data, graphics or videos, can be directly fed. Content inputs can be of multiple formats and the screens provide high-quality video display, said officials.

As of now, the LED boards display content from 8 am to 10 pm and from 5.30 pm to 10 pm. Some boards also function early in the morning, capturing the attention of morning walkers.

Rain or shine, the boards can display content as they have a protection mechanism from rain and blistering heat. At present, the display boards are being managed by Assistant Electrical Engineer of the MCC through remote operation with control room established at MCC office.

As Mysuru is competing to regain the Cleanest City Tag in the ongoing Swachh Survekshan exercise, messages on clean Mysuru, slogans on environment, MCC’s services to the people like citizen helplines and various steps taken by the MCC to maintain cleanliness and hygiene are being screened. Once the Swachh Survekshan is over, messages on traffic maintenance, tourism-related information, voter awareness, pulse polio, government schemes and programmes, education policies and others will be screened.

With such hi-tech boards, the MCC does not have to spend time and money, repeatedly finding a painter who will undertake the hazardous task of climbing up the advertisement hoarding and painting the advertising message.