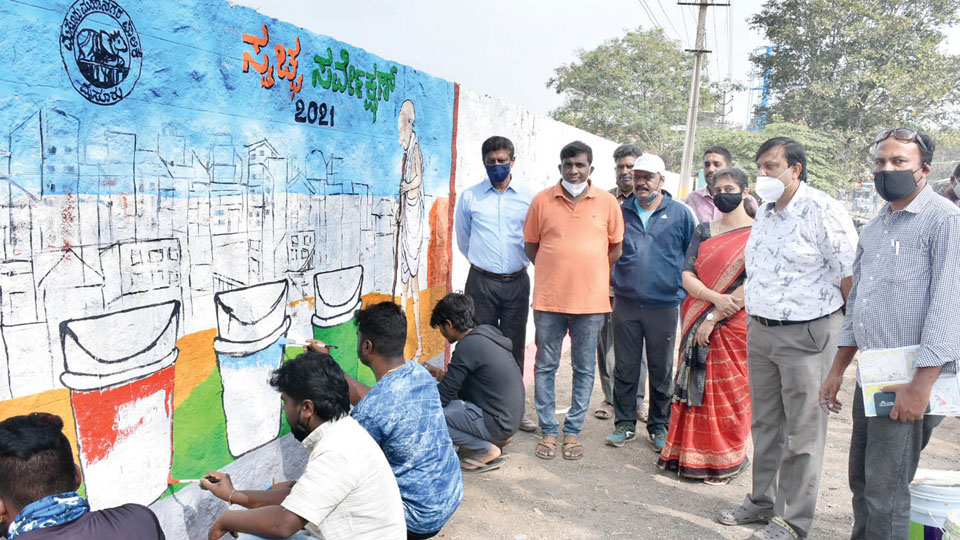 Mysore/Mysuru: As part of bringing in a behavioural change in maintaining cleanliness in city, the Mysuru City Corporation (MCC) had organised a wall painting competition this morning to spread Swachh Bharat Mission messages in all its nine zones. This competition is part of the MCC’s efforts to bag the Cleanest City of India title in the on-going Swachh Survekshan-2021.

The MCC intends to create awareness on cleanliness through Information, Education and Communication (IEC) campaign. The Ministry of Housing and Urban Affairs (MoHUA) has released the Swachh Survekshan-2021 tool-kit that has a set of parameters for ranking cities.

It has given weightage to the city’s beautification drive and sustainability. Under the direct observation category, MoHUA has allotted 200 marks for wall paintings drawn on flyovers, public walls with the involvement of citizens. Such paintings will be directly inspected by the Ministry.

In Zone-9, the competition was held at Sangeetha Corner of Siddarthanagar that was inaugurated by Deputy Mayor C. Sridhar and Corporator Ashwini Ananthu. MCC Health Officer Dr. D.G. Nagaraj, Zonal Assistant Commissioner Harish and others were present.

In Zone-1, the competition was held at Muslim Burial Grounds compound at Chamundipuram, New Kantharaj Urs Road at Jayanagar in Zone 2, Ramaswamy Circle under Zone-3, P.K. Colony in Gokulam under Zone-4, Metagalli Government School in Zone-5, Yadavagiri Railway Bridge under Zone-6, CPC Polytechnic College near Fountain Circle under Zone-7 and near the public toilet at Kurimandi in Zone-8 .

Dr. Nagaraj said that these spots for wall painting were identified as maximum waste is dumped here on a day-to-day basis. “We want to make the public aware of cleanliness of surroundings that will enable the city to emerge as the Cleanest City. The paintings can be done for a week by anyone who is interested for a week. Prizes will be given by the MCC for the best painting,” he said.

The awareness graffiti was done by participants spending several hours by using paints sponsored by the MCC and the paintings conveyed the messages related to cleanliness, use of toilet, reducing the use of single use plastic and conservation of forests. During this drive, the participants were made aware about social distancing norms and use of masks while carrying out social activities.

Dr. Nagaraj said that the MCC was doing everything to increase citizen’s participation. “In the past Swachh Survekshan, we were not able to gain good marks in citizen participation. This year, however, things are looking good and till yesterday we have received over 51,000 votes,” he explained.

Every day, the MCC recycles 130 MLD (million litres per day) of waste water and supplies them for various purposes.