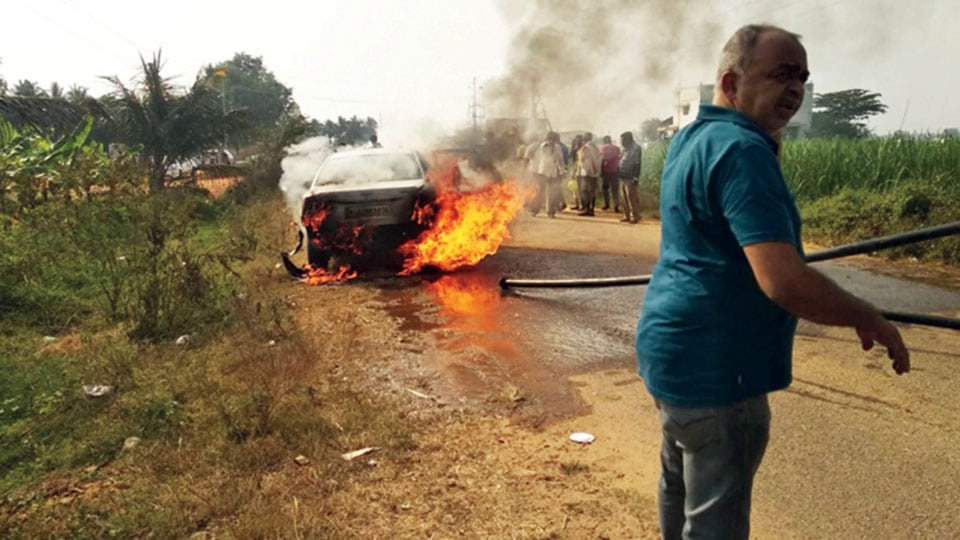 K.R. Pet: A family from Bengaluru had a miraculous escape after the car in which they were travelling caught fire when the vehicle speeded over horse gram and ragi crops that were laid on the road for threshing by farmers in K.R. Pet yesterday.

The tradition of threshing paddy, horse gram and ragi crops on roads to separate the crop from the sheaves cause accidents on roads and Highways.As harvesting season reaches its peak in January, farmers use main and interior roads to thresh harvested crop in order to obtain the grains.

Threshing is the process of loosening the edible part of grain from the husks and straw to which it is attached.  However, as the crops are laid on the road, vehicles moving on the crops generate great heat when it comes in contact with fast-rotating tyres. In the process, the vehicle catches fire due to the friction between the vehicle tyre and the asphalted road.

Yesterday’s incident was reported near the famous Bhoovarahaswamy Temple at Kallahalli village in K.R. Pet. Rajagopal, a resident of Mahalakshmi Layout in Bengaluru had come to the Temple in a car along with his family for darshan in the afternoon. As the car neared a place that is two to three kilometres from the Temple, it caught fire as the wheels speeded on the horse gram and ragi crops that were laid on the road.

Unaware of the fire, the car continued to travel on the road. Passers-by and a few farmers, who observed the flames coming out of the vehicle, chased the car on their bikes and alerted the family. Rajagopal, his wife, daughter and mother immediately got out of the vehicle. The fire spread instantly as the car stopped and it was a close shave for the family.

Though the villagers alerted the Fire and Emergency Services Department, the vehicle was completely destroyed. The fire engine was able to douse the fire later. A case has been registered at K.R. Pet Rural Police Station.

It may be recalled here that following a series of accidents due to paddy and ragi threshing on roads, Mysuru Police had warned farmers not to use the roads for farming activity. But despite warning, they continue to indulge in this activity as it saves labour costs.