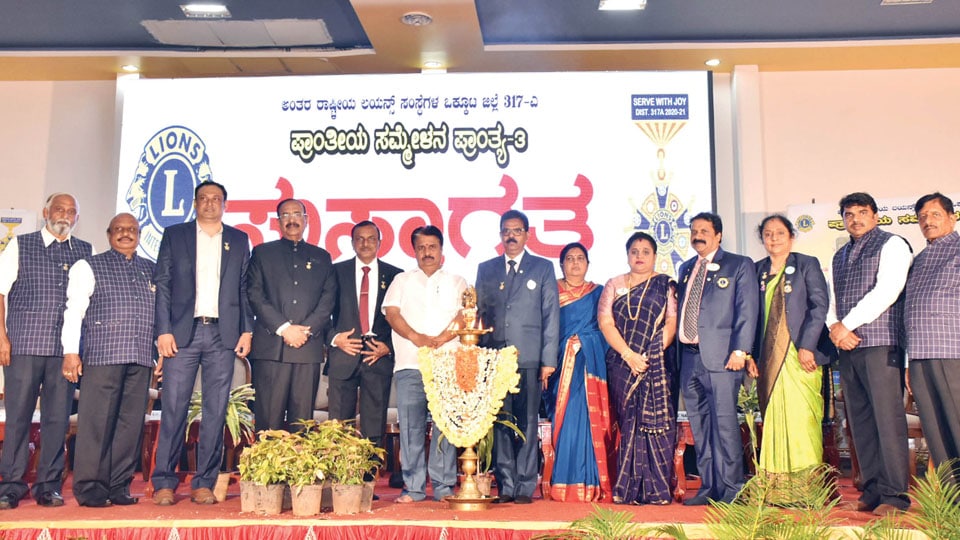 Plans afoot by Karnataka Urban Water Supply and Drainage Board

He was speaking after inaugurating Regional Conference of Region-3 organised by Lions International Clubs District 317-A  with the theme ‘Lake Development-State Prosperity’ in city this morning.

Rajeev expressed his grave concern over the disappearance of natural water bodies owing to urbanisation and said human beings have disturbed nature’s cycle by changing water routes. In the name of development, man has systematically damaged catchment areas of lakes resulting in rain water flowing into sea or ocean instead of natural waterholes. It was happy to note that Lions Clubs have successfully rejuvenated a neglected lake in city and has done what the Government agencies should have done.

Sharing his experiences in environment protection, he said an organisation started by him to protect environment, has so far cleaned a number of lakes and  planted saplings as part of ‘Laksha Vruskha Abhiyana.’ As many as 5,000 saplings planted by them on Ring Road, Manandawadi Road and Nanjangud Road have grown taller and giving fresh air to citizens.

Rajeev said untreated sewage water is released into Varuna Lake from neighbouring areas without understanding its impact on water. The State Government has introduced boating and adventure spots there to promote tourism. Polluted water was also a threat to fish. The authorities concerned must take immediate measures to check inflow of untreated sewage into lake by setting up treatment plants.  Need of the hour was to understand the importance of protecting natural waterholes without polluting them as they help in rejuvenation of underground water table.

Ln. Jayakumar, Regional Chairman, Region-3, said all the clubs grouped together and took up Ayynorakatte in Alanahalli for rejuvenation with the support of NSS Students of MIT College. Members of Lions Clubs and students jointly worked for days together and cleaned the tank at a cost of Rs.1.75 lakh. Through Shramadhan, they have de-silted the Kalyani, removed weeds, put concrete benches, planted saplings and installed the gate. Now, it was a feast for eyes to see the rejuvenated tank, he added. Ln. Dr. G.A. Ramesh, District Governor, Ln. Prasanna N. Gowda, Ln. N. Jayram, Ln. M.V. Nandish, Ln. S. Nageshmurthy, Ln. H.V. Prakash Babu, Ln.  L.V. Srinivas, Ln. G. Shivakumar, Ln.  Anuradha Nandish, and others were present.

It may be mentioned, recently Minister S.T. Somashekar inaugurated a fountain that functions with recycled waste water at Subbarao Park in Niveditanagar.