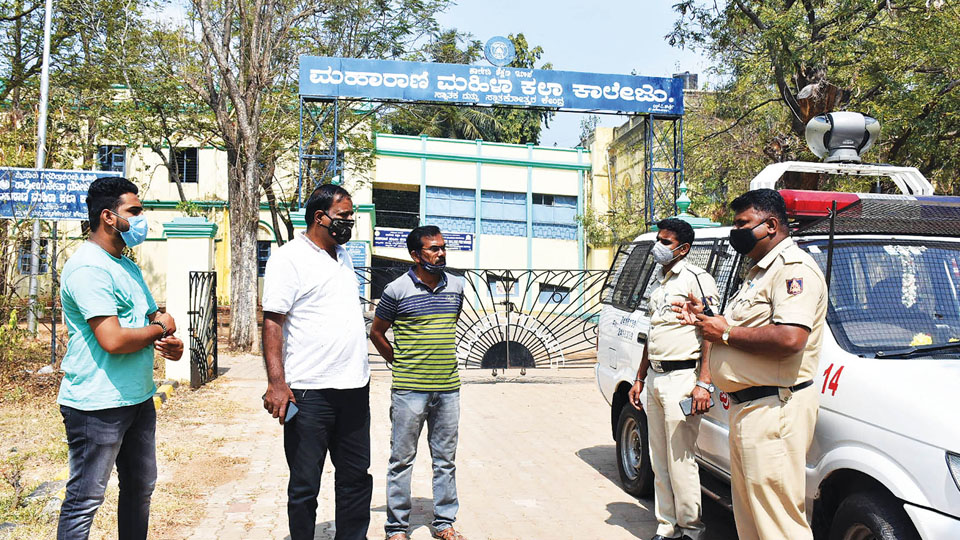 Mysore/Mysuru: Totally unaware of the fact that the KPSC (Karnataka Public Service Commission) had cancelled the written exam for appointment of First Division Assistants (FDAs) in various Government Departments, late last evening following leak of question papers at Bengaluru, some candidates arrived at almost all the 49 exam centres across the city on time. The exam was supposed to commence at 10 am. The candidates returned a disappointed lot after learning from the security personnel and the Police and also getting confirmation from the authorities that the exam was cancelled and the KPSC would announce the new date of the exam shortly.

A majority of the students, who arrived at the centres — which included Maharani’s College, Maharaja’s College, Teresian College, Mahajana College, Sadvidya College and Vidyavardhaka College among others — were from rural and distant parts of the district, who could not learn about the exam cancellation either personally or through electronic media or through other means of communication.

They seemed shocked to learn that the KPSC had cancelled the exam at the last minute due to question paper leak and could hardly believe the news, which they learnt only this morning upon arrival at their respective exam centres.

Many of them were heard whispering that all their preparations for this crucial exam  to enter Government service had gone waste with the sudden postponement of the exam.

READ ALSO  KPSC exam for selection of FDAs on Jan. 23 and 24

The KPSC was scheduled to conduct exam for General Kannada, General English and General Proficiency papers in two sessions today at 49 centres across the city. More than 25,000 candidates had registered for exam at  city centres, which were completely sanitised as per COVID-19 protocol. Even the city Police had issued prohibitory orders in 200 mts. radius around all the exam centres from 6 am till 6 pm today, for ensuring smooth conduct of the exam.

Meanwhile, the compulsory Kannada paper was held smoothly yesterday at three centres in the city.

More than 3.74 lakh candidates had registered for the exam  in the State for recruitment to just over 1,100 FDA posts.

The FDA exam was scheduled to be held at hundreds of centres across the State today. Following a tip off that the exam papers had got leaked, with some persons trying to sell them to candidates for huge sums of money, the Bengaluru CCB Police raided a spot at Ullala in Bengaluru and arrested six persons, when they were trying to sell photocopies of question papers.

Police have seized copies of question papers, Rs.24 lakh cash and three vehicles used for transporting leaked papers. Two of the arrested have been identified as Rachappa and Chandru, while Police are yet to disclose identity of four others.

Soon after the seizure of question papers, the Police sent them to KPSC for confirmation whether the seized papers were the original ones or not.  KPSC, after a check, confirmed that the papers are in fact the actual ones meant for Jan.24 exams for FDA recruitment, following which CCB Joint Commissioner of Police Sandeep Patil informed the matter to KPSC Secretary G. Satyavathi, who in turn, ordered postponement of the exam.

In a press release issued on Saturday (Jan.23), Satyavathi said that KPSC written exam for recruitment to FDA posts that was scheduled for Jan.24 has been postponed due to inevitable reasons as the papers got leaked and that a new exam date will be announced.