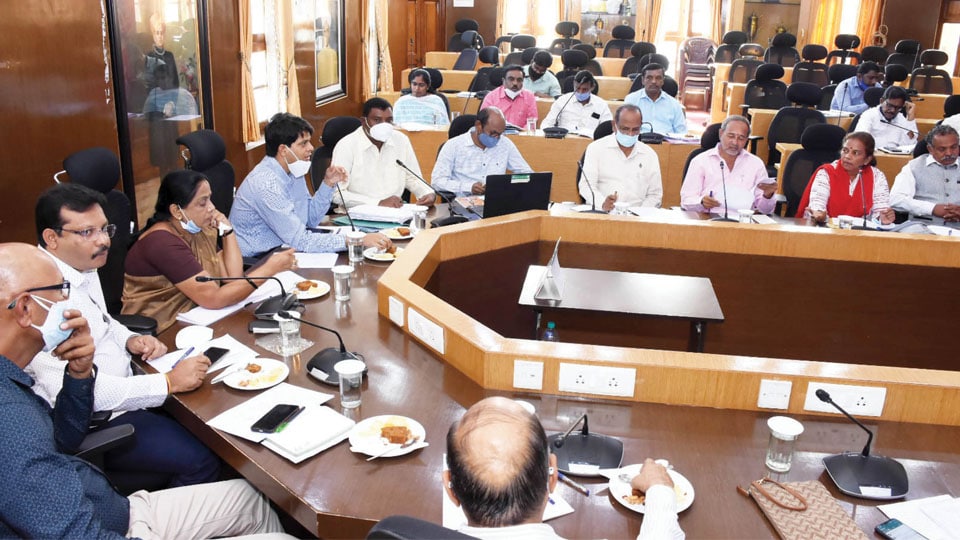 Former Mayor B.L. Bhyrappa said it is important to collect property tax in Revenue Layouts as this will help in augmentation of revenues. Stressing on the need for ending confusions over online tax payment system, he said that the civic body should consider waiver of interest on water bill dues.

Regretting that the budgetary announcements are not being met, Bhyrappa pointed out that the issuance of B-khata in respect of Revenue Layouts, which was introduced in 2012-13 was stopped in 2018.

Emphasising on the need for simplification of Trade Licence process, he also called for a reduction in taxes concerning theatres, Kalyana Mantaps etc.

Another ex-Mayor R. Lingappa suggested regularisation of illegal water connections. Pointing out that it is necessary to collect additional tax from buildings that violate norms, he suggested that MCC should levy 25 percent additional tax in case of building plan violations.

Yet another former Mayor Purushotham observed that officials were failing in their task of collecting tax dues, despite widespread public awareness.

Observing that most of the stalls in Devaraja Market have been rented out by original allottees, he opined that MCC had failed in securing its properties.

Urging the MCC to sensitise people that tax payment is vital for claiming ownership of properties, he wanted the MCC to stop illegal constructions in burial grounds land.

Former Mayor Dakshina Murthy wondered how roads in revenue lands were far better when they are in poor shape in tax-payer layouts. Contending that the people will judge the MCC based on its works concerning roads, sewage, underground drainage, waste disposal and such other civic amenities, he suggested for partial waiver of interest on property tax dues.

Former Deputy Mayor Pushpavalli said that in the wake of the recent gang rape of a college student in the city, the MCC should distribute autos to women under Pink Auto Services Scheme. She also suggested introduction of ‘Fix My City’ app on the lines of BBMP that facilitate residents to highlight the problems in their area and also get feedback.

P. Vishwanath, the first Mayor of Mysuru, emphasised on the need for presenting a budget that balances both earnings and expenditures.

Underlining the importance of collating maintenance costs and expected revenues, he reiterated the need for presenting a factual budget and cautioned against presenting an imaginary budget.

Mysuru Hotel Owners Association President C. Narayanagowda said MCC should take measures for simplification of trade licence procedures. Asserting that MCC can collect more than Rs.10 crore as trade licence fee, he bemoaned that traders and businessmen along the Ring Road are a disappointed lot as they are unable to get trade license either from the MCC or the concerned Gram Panchayat. He wanted the MCC to take necessary measures for resolving the issue.

Mysuru Industries Association General Secretary Suresh Kumar Jain said MCC should take stringent measures for checking dumping of wastes and debris at open spaces all along the Ring Road. Regretting that industrial areas such as Bannimatap A and B Layouts, Visweshwaranagar and  Yadavagri are lacking in basic civic amenities, he wanted the MCC to evolve a plan for improving Industrial infrastructure out of funds under various heads of the State and Union Governments.

Mysore Grahakara Parishat (MGP) President Dr. B.V. Shivamurthy said that though the MCC has seen a significant success in property tax collection, he stressed on the need for simplification of tax computing and other procedures. Highlighting the need for plugging water tax pilferage, he said that it is vital for having good roads as this is one of the parameters of judging a civic body.

MCC Commissioner G. Lakshmikantha Reddy, after hearing all the suggestions, said that the budget will be prepared based on the suggestions of all stakeholders.

Announcing that the MCC would get 65 autos for 65 wards for maintaining cleanliness, he said that the MCC has planned to appoint at least 10 women for driving these autos and women drivers will be trained for the purpose.

Declaring that the MCC has collected Rs.135 crore property tax by the end of December last, Reddy said that the tax collection is expected to go up to Rs.160-Rs.170 crore by the end of the financial year (March), which means an increase of about Rs.40 crore as compared to last year.

As regards, water tax collection, the MCC Commissioner said that Rs.50 crore has been collected as water tax by the end of December and this figure is expected to go upto Rs.65-Rs.70 crore by March.

Maintaining that online trade licence issuance will begin from Aprl.1, he said that every ward will get Rs.10 lakh grants for road repair works. Observing that potholes in 80 percent of city roads will be fixed by the end of this month, he said that the Mayor has directed for fixing all roads in the next two months.

Super Commercial Tax to be dropped