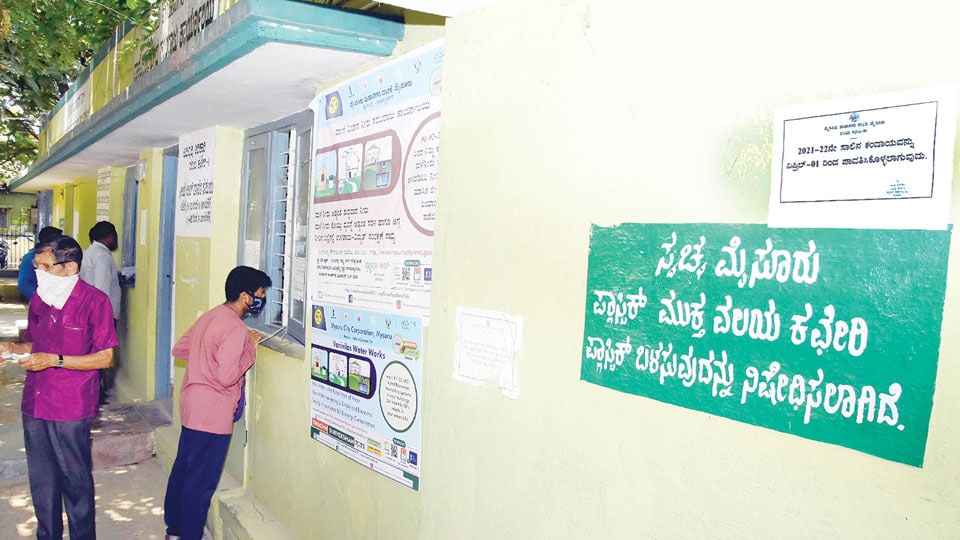 There are many Mysureans who are agitated about the payment of property taxes — failure of online system to function, long lines to pay taxes, and above all the unexpected increase in taxes. In this article I have attempted to analyse the reasons for tax increase.

It was just five days before the deadline of April 1,  the earliest one can pay property tax for 2021-22 we were told that property tax will go up by 15%. However, in reality it has gone up much beyond 15% for most — as much as 170% or more depending upon the vacant land around the house. Why did the Government wait till the last minute to make an announcement without calling for comments from the public?

It is unfair and wrong that an important topic like property tax is handled in the most undemocratic way. According to 74th amendment to the Constitution, Urban Local Body (ULB) has the responsibility to look after several subjects like poverty alleviation, health, sanitation, urban forestry, gardens, parks, slum improvement, solid waste management, etc. But the ULB like Mysuru City Corporation (MCC) has no authority to decide policies concerning property tax. It is decided by the State.

ULBs can only collect the amount decided by the State. I am sure that no one at MCC wanted to mislead the public. MCC had to incorporate the tax changes dictated by the Government to get grants and they had no option to soften the shock. But this does not let them off the hook. They knew the deadline of April 1.

It is unfortunate that despite having all the time, much anticipated online tax system created a lot of problems — first few days it will not allow payment online, frequent server downs forcing residents to wait in line for hours (I was one of them) to pay at MCC service centres etc. Apartment owners had to wait even longer since the online system was not ready to accept their payment. After paying tax and cheque being cleared, system does not show taxes have been paid even after two weeks.

Through MLAs, the Corporators should have asked the Government about new tax policy several months back. What can be more important than property tax which account for more than 50% of total MCC budgets?  Obviously they failed.

Even now MCC has not come up with any explanation about how they goofed and misled the public by stating it will go up by mere 15% and that too during a pandemic year.

Through a table which gives tax for four different types of houses, I have attempted to throw light on why taxes have gone up to start a debate.

As shown in the table on property tax, for the House A with no vacant land around the house, tax has gone up by only 14 percent, for House D with huge vacant land it has gone up by 170 percent. For other two Houses B and C,  increase are 47 percent and 76 percent respectively.

These increases are mostly because of two factors — both justified. One is to reflect the increase in cost of construction from Rs. 580 to Rs. 1,365 per square feet and the other is to reflect value of land from Rs. 1,000 to Rs. 3,716 per square feet. This is partly compensated by reducing tax rates from 0.9131% to 0.647% (I wonder why such precision to four decimals). Also instead of taking 50% of the market value for land,  25% of the value is considered to compute taxes.

Still for houses around which there is vacant land, tax increases are huge. In the past, vacant land did not attract any tax. This was not fair and equitable  since land is often far more valuable than the house. Thus a small house on a small plot had more or less the same tax liability as a small house on a large parcel of land. While the Government is justified in putting a tax on vacant land, they should have done it gradually and not at one go. There are some who argue that such a huge tax on vacant lands forces them to sell to apartment construction companies instead of developing it as green space.

The revised policy says that houses without a Completion Report (CR) do not have to pay double the amount like in the past. This should have made many house owners happy.

If only the Government had public discussion about property tax earlier and not pulled an unpleasant surprise, the Government could have gained the support of the public and avoided the vehement opposition to sudden increase in the tax.

Just like people not renting their houses get 50% discount, they could have considered giving some concession to senior citizens. It is not clear on what basis depreciation rates for buildings have been based or how land and construction values have been arrived at.

It looks as though the entire exercise of property tax policy has been done in an undemocratic way by bureaucrats without consulting experts and also not taking into consideration the burden on vulnerable section of the society. Government should form a committee of experts and elected leaders from all parties to formulate a sound policy to take a comprehensive look into the property tax.

NOTE: In my article published in Star of Mysore in 2018, I had estimated that if property tax system is scientifically developed and efficiently administered, MCC can collect more than Rs. 250 crore per year. Even the new estimate given by MCC of Rs. 180 crore is an underestimation. While honest tax-payers follow the rules, many manage to pay less.