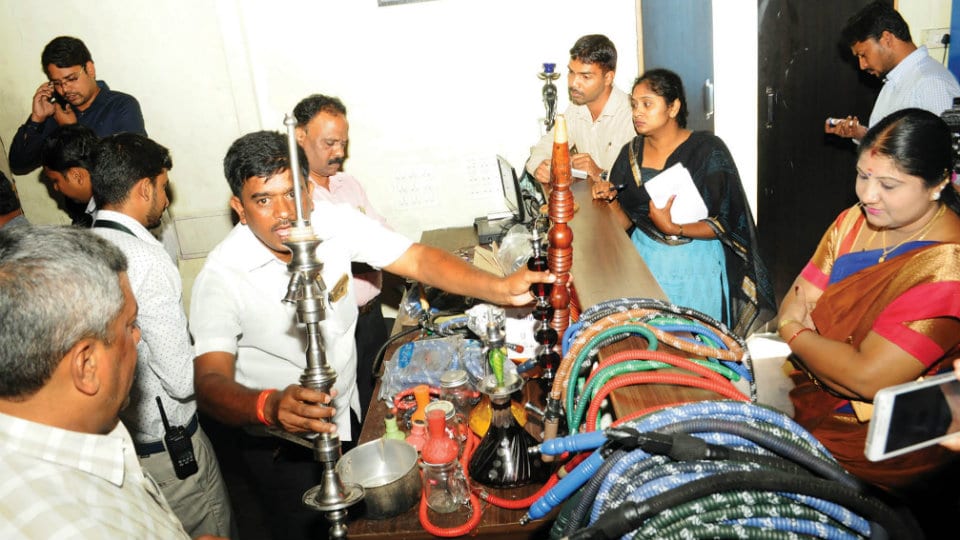 Mysuru:  In a surprise raid conducted by the members of Mysuru City Corporation (MCC) Standing Committee on Health, four illegal hookah bars were shut down yesterday. The bars were run clandestinely by certain influential people at Bannimantap, Vontikoppal and Kalidasa Road, hoodwinking the law.

The raids took place at ‘Highway Cafe’ near Highway Circle, Bannimantap, ‘Flavours’ on Kalidasa Road and ‘Nonsense Cafe’ and ‘Base Camp’ at Vontikoppal. The clubs were allowing youth to have smoking sessions with Hookah or ‘Sheesha’.

When the raid happened, many college students were caught puffing from these hookas. Some of the youngsters were found in an intoxicated condition and the raiding team found a couple of girl students indulging in hookah smoking. These hookah bars were charging Rs.400 for a 15-minute smoking session and if a student spends a few hours there, he/she will end up paying more than Rs.2,000. One of the hookah bars had “Why drink and drive when you can smoke and fly” written on the walls. The MCC team including officials and Corporators seen inspecting the seized smoking pipes and tobacco at one of the hookah bars in city yesterday.

“There were complaints about hookah bars being operated in many parts of the city. We had the information about a few of them operating in Vontikoppal and Kalidasa Road where there is considerable population of youth and college students. These hookah bars make good business on weekends. All the bars were found violating the norms by having hookah bars of their own. We have seized them,” said the raiding MCC authorities.

They added that students were warned not to come to such clubs and spoil their studies and career. “Smoking hookah has numerous side effects because hookah smoke includes 4,000 chemical materials, most of which are produced during burning process and are combined with more than 40 carcinogenic materials. Besides, hookah produces significantly higher amounts of smoke compared to cigarette. Despite harmful effects, and though banned, such outlets continue to do business and we have taken action,” they said.

We have given directives to the jurisdictional Police to close down such illegal hookah bars as it is a violation of law to run such bars. As per law, tobacco is banned in public and wherever it is sold and consumed, the Police will take action. We will have to examine the type of smoking and if there is a use of tobacco or is it fruit flavour. Action will be initiated against the owners of such outlets if they are found selling tobacco and other banned items.  – Dr. A. Subramanyeswara Rao,City Police Commissioner

In the past, I had initiated action against the hookah bars and had lodged many complaints with the Health Standing Committee that led to shutting down of hookah bars. Now again these hookah bars have mushroomed and are doing illegal business by wrongly claiming that the High Court has permitted them to function. Actually, the High Court has banned hookah bars and the use of banned substances like tobacco. I was surprised to note that some of these bars were operating in my MCC Ward 32. I will ensure that hookah bars will not open in my Ward. – S.B.M. Manju, Ward 32 Corporator, MCC