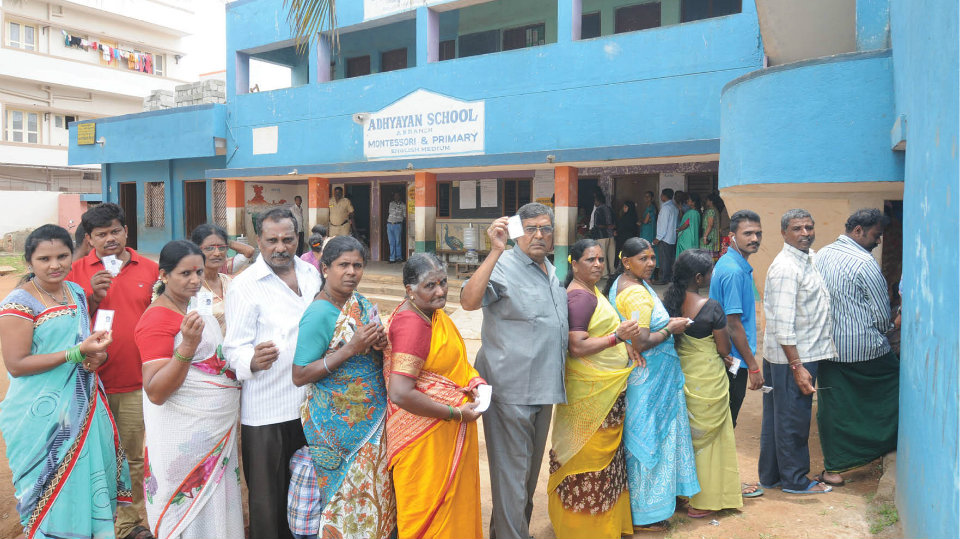 Mysuru: The polling for 65 Wards of the Mysuru City Corporation (MCC) ended peacefully at 5 pm yesterday, with the city recording a dull 50.01 percent voting.

The polling which began on a sedate note at 7 am on Friday, later picked up momentum as the day progressed. But the overall polling percentage stood at a dismal 50.01 percent after polls concluded at 5 pm, thus bringing disappointment to the authorities for achieving 75 percent polling.

While Ward No.36 (Yeraganahalli-Ambedkar Colony), coming under N.R. Assembly segment. recorded the highest polling with 65.83 percent, Ward No.24 (Mandi Mohalla), coming under Chamaraja Assembly segment, recorded the lowest polling with 36.80 percent. While 6,621 out of the 10,057 voters cast their votes in Ward No.36, only 4,385 out of the 11,918 voters exercised their franchise in Ward 24.

While Ward No.1 (Hebbal-Lakshmikanthanagar) recorded 48.56 percent polling, Ward 65 (Srirampura), the last Ward of the MCC, recorded a poor 42.02 percent polling, with only 5,977 voters out of 14,224 voters exercising their franchise.

After the voting ended at 5 pm, the poll officials brought the EVMs to the Strong Rooms at Maharani’s Commerce and Management College on Valmiki Road in Vinayakanagar (Paduvarahalli). With the fate of 393 candidates, including 163 women, sealed in EVMs, the Police have provided tight security in and around the College. The counting of votes will be taken up at 8 am on Monday (Sept.3) and the results are expected by noon the same day.

The election Commission had set up 815 Booths including 90 Auxiliary Booths across the city for polling to 65 MCC Wards, which went on peacefully and smoothly, except for some minor incidents.