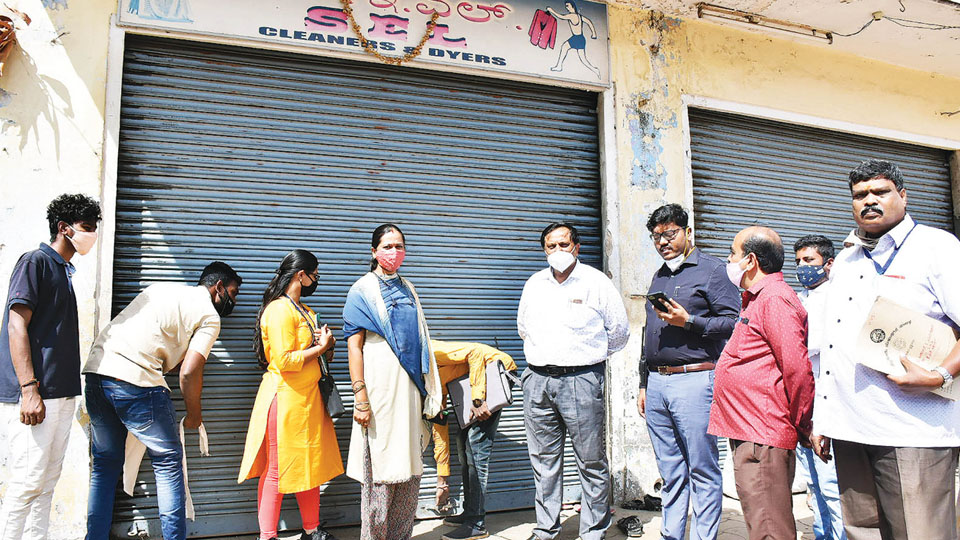 Mysore/Mysuru: The Officers of Mysuru City Corporation (MCC) Zone-6 are literally doing the Walk, Talk and Collect Tax on the busy Devaraja Urs Road in city this morning in a bid to collect pending tax from traders on-the-spot.

With trade and business activities hit due to COVID-19 pandemic since March this year, collection of tax has become a biggest headache for the MCC authorities. All trade was shut for almost two months during Janata Curfew imposed on the entire country a few months ago to contain spread of Coronavirus. Traders have not paid tax citing ‘dull business’ in the last eight months owing to COVID and have sought time. But the MCC was also in a hurry to collect tax without which they cannot take up development works in city.

In order to fill MCC coffers, A.S. Ranjith Kumar, Assistant Commissioner of Zone-6, who assumed Office 15 days ago, has launched ‘Walk, Talk and Collect Tax’ from traders in his Zone.

Accompanied by Revenue Inspector Rajeshwari, Health Officer Dr. M.S. Jayanth and a host of MCC officers, the team started this campaign from K.R. Circle in the heart of the city and marched towards Devaraj Urs Road. Their first stop was at a laundry shop at K.R. Circle which has an outstanding of Rs.3 lakh, unpaid for last three years due to family dispute. To send a strong message to all tax defaulters, the team members sealed the shop.

As and when the group of MCC Officers entered Devaraj Urs Road, the traders voluntarily handed over the blank cheque to avoid embarrassment in public. A few of them also cleared a portion of tax dues by making cash payment. The team members are planning to complete D.D. Urs Road today and collect taxes as much as possible.

Ranjith Kumar told Star of Mysore that the aim of launching this campaign was to collect tax dues as well as fee for non-renewal of trade licences by shop-keepers.

As many as 5,000 traders come under Zone-6 of which only 1,500 traders have renewed trade licence. The Corporation was not only making them to renew trade licence but also to clear property tax dues without causing hardship to customers.

“We have not sealed any shop in the city except one at K.R. Circle,” he pointed out.

He said the drive will continue for the next 15 days till all dues were collected from traders. On seeing team of officers, many traders voluntarily came forward to give the blank cheque and promised to come in the afternoon to know correct dues from the Accounts Department.

It may be mentioned here that the MCC is in neck-deep trouble owing to huge tax collection dues owing to outbreak of pandemic this year. The Corporation is offering rebate to traders to pay at least a portion of tax but the response has been negative.