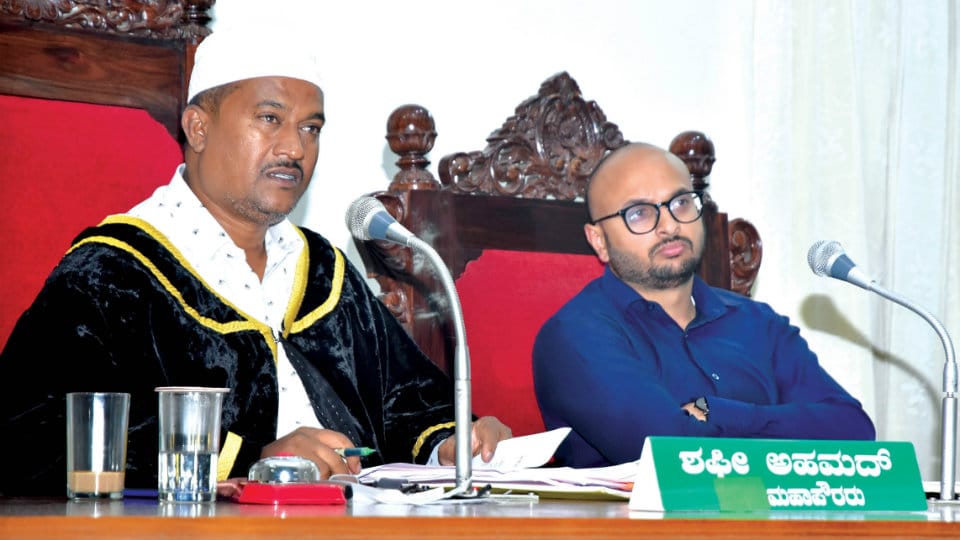 Old Council Hall to be named after Sri Jayachamaraja Wadiyar

This momentous decision was taken at a meeting chaired by Deputy Mayor Shafi Ahmed (in the absence of Mayor Pushpalatha Jagannath) at the Council Meeting held here yesterday.

Corporator M.C. Ramesh speaking at the meeting, said that, Bruhat Bengaluru Mahanagara Palike (BBMP) every year presents Kempegowda award to achievers and on the same lines, the award should be presented in the name of the Maharajas, who have a laid a strong foundation for the city and contributed immensely to its growth.

In this direction, five persons should be recognised for their contributions and conferred ‘Nalwadi Krishnaraja Wadiyar,’ award every year he urged. The members unanimously gave their approval for the proposal. Shafi Ahmed announced that from next year during Dasara, the award will be conferred.

Reacting to this suggestion, Shafi Ahmed said that it was due to the Maharajas who had donated this piece of land that the building was standing here today and hence it would be very appropriate to name the Old Council Hall in the name of Sri Jayachamaraja  Wadiyar.

Fill potholes: The High Court had passed an order that if there is death due to potholes on the road, then the local bodies must pay compensation to the victims’ families and hence potholes must be immediately filled, Shafi Ahmed said. It is the responsibility of everyone to take part in tree planting and greening of the city. Several programmes must be taken up to see that the city is included under the Smart City Project, urged Shafi Ahmed.

Remove encroachments: Several members spoke about how the box drainage has been encroached in their wards and demanded immediate clearance of the same. Deputy Mayor Shafi Ahmed and MCC Commissioner Gurudatta Hegde said that an inspection will be done and encroachments, if any, will be cleared.

Rs.1.65 crore dues: Corporator M.C. Ramesh said that an RTI applicant had written to him that only Rs.35 lakh had been collected as tax from the Police Bhavan building while the due was to the tune of Rs. 1.65 crore, why no one had bothered to take any action so far.

Replying to this, Commissioner Gurudatta said the names of the top first 100 who had the maximum dues list had been prepared and steps have been taken to shame them publicly.

Free issue of Death Certificate: Corporator Prema Shankaregowda brought to the notice of the Council that there were no security guards in the crematoriums and no one to register the deaths. Just based on Aadhaar Card and death ceremony invitations, death certificates were being issued, she charged.

She also pointed out that it was a good idea to have exercise equipment in public parks but asked how they were being installed. The Commissioner assured that tenders would be called shortly for this purpose.

Finance Standing Committee Chairperson Shobha said that even though the Mysore Tennis Club near Chamarajapuram Railway Station got funds from MP LAD Funds for running the club, it was still collecting high fees. The officials were giving false information regarding this, she alleged.