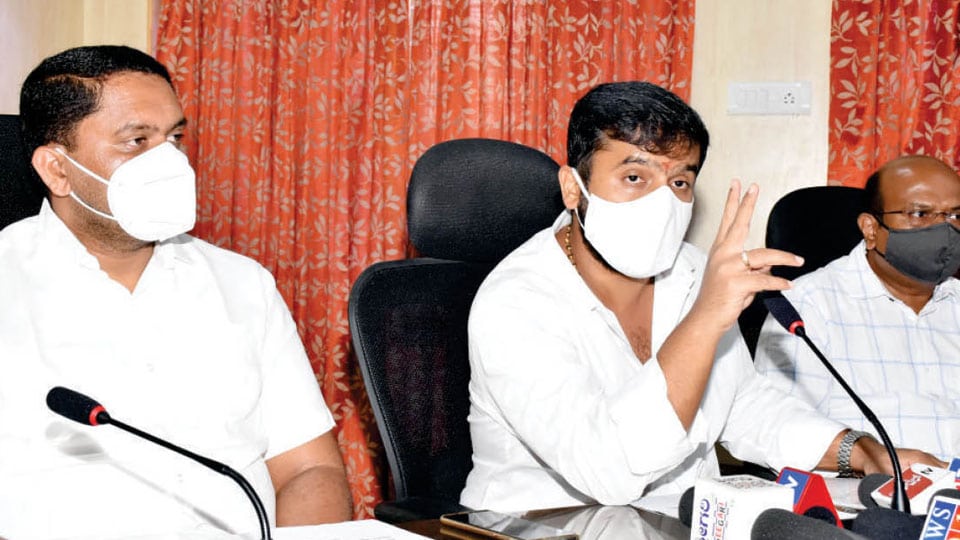 Mysore/Mysuru: District Minister S.T. Somashekar will inaugurate the new branch of MCDCC (Mysuru- Chamarajanagar District Co-operative Central) Bank at Hebbal (Surya Bakery road) in the city at 10.30 am on July 6.

Announcing this at a press meet at MCDCC Bank Head Office at Nehru Circle on Ashoka Road here yesterday, MCDCC Bank President G.D. Harish Gowda said that following the inauguration of the bank branch at 10.30 am, District Minister Somashekar will inaugurate ‘Raitha Spandana’ at KSOU auditorium at Mukthagangothri on Hunsur road  at 11 am, during which farmers and dairy farmers will be distributed loans.

Pointing out that the Bank has proposed to distribute  crop loans of Rs.860 crore to 90,000 member farmers, he said that about 20 farmers will be distributed cheques symbolically at the  programme.

Highlighting the initiatives and benefits extended by the Bank to agri farmers, poultry farmers, dairy farmers etc., Harish Gowda said that during the Raitha Spandana programme, it is also proposed to distribute Rs.904.40 lakh MSC loan to 39 Co-operative Societies under NABARD’s special initiative.

Maintaining that 280 farmers from Mysuru and Chamarajanagar district have lost their lives due to COVID since the pandemic broke out last year, Harish Gowda said that MCDCC Bank is mulling on ways to waive off a total of Rs. 2.10 crore that was availed as crop loan by the deceased farmers.

Continuing, Harish Gowda said that the MCDCC Bank had advanced loan of Rs. 704 crore when he took over as the Bank’s President in Nov. 2018. Now the loan advancement has increased to Rs.1,012.82 crore by the end of March this year.

Maintaining that the Bank’s NPA (Non Performing Assets) has come down to 1.85 percent from 3.01 percent earlier, he said that the Bank’s profits has touched Rs.4 crore, which is a significant achievement.

MCDC Bank CEO E.C.Janardhan, Director Manju Gowda and others were present at the press meet.