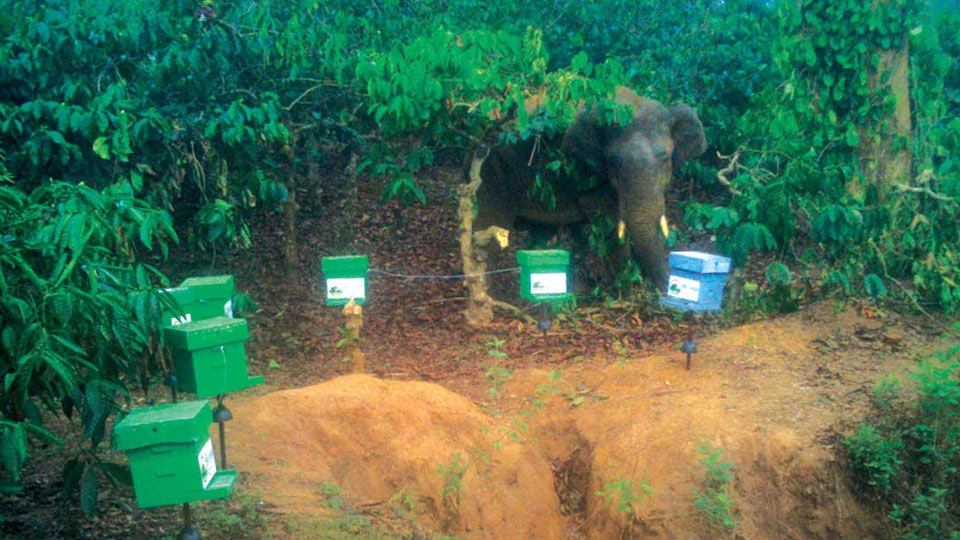 With a view to reduce human-elephant conflicts in the country, Khadi and Village Industries Commission (KVIC) has launched a unique project of creating “bee-fences” to address this burning issue in several States including Karnataka.

The pilot project has been launched at few locations in Kodagu. These spots on the periphery of Nagarahole National Park are known to be human-elephant conflict zones. Total cost of project is Rs. 15 lakh.

Reality check has revealed that the wild pachyderms were maintaining a safe distance from bee boxes. Locals say this has reduced the elephant menace by 70 percent. Bee boxes have been placed at Kutta including Choorikaad and Tithimathi ranges. Jumbos were not seen in these places in the last 25 days. Villagers opined that elephants may have found alternative route.

In fact, the jumbos had damaged bee boxes near Kodange Haadi near Nagarhole recently. Since then, they have not come back. There are instances of young elephants straying into these fences. The cameras have captured the hesitancy of jumbos crossing the fence fixed with bee boxes and also taking de-tour within 27 seconds.

KVIC has set up 15-20 interspersed bee boxes at selected locations. The bee boxes are set up in the passage ways of elephant-human conflict zones to block the entrance of elephants to human habitations. The boxes are connected with a string so that when elephants attempt to pass through, a tug or pull causes the bees to swarm the elephant herds and dissuade them from progressing further. Bee boxes have been placed on the ground as well as hung from the trees to block the passage way of elephants. High resolution, night vision cameras have been installed at strategic points to record the impact of bees on elephants and their behaviour in these zones. The collective buzz of the bees is annoying to elephants that force them to return. Elephants, which are the most intelligent animal and carry their memories for long, avoid returning to the place where they have encountered honey bees.

Nearly 500 people die every year due to elephant attacks in India. This is nearly 10 times more than the fatalities caused by big cats across the country. From 2015 to 2020, nearly 2,500 people have lost their lives in elephant attacks. Out of this, nearly 170 human fatalities have been reported in Karnataka alone. On the contrary, nearly one-fifth of this number, that is nearly 500 elephants have also died in retaliation by humans in the last 5 years.

In the past, Governments have spent crores of rupees on digging up trenches and erecting fences to dissuade elephants. Also, hundreds of crores of rupees have been spent on compensation for loss of human lives. These trenches and barbed wire fences have often caused the deaths of elephant calves and thus rendering these ideas largely impractical.