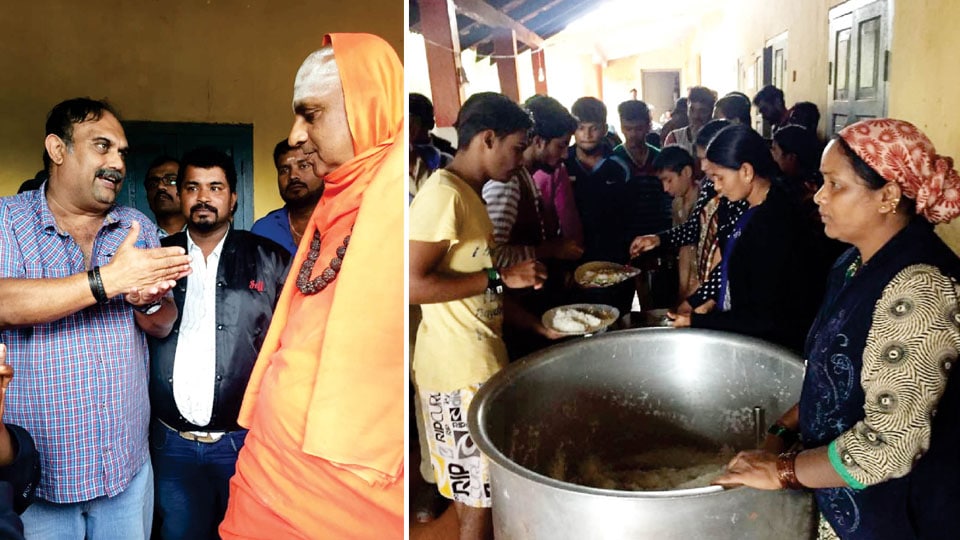 Happy families are all alike; every unhappy family is unhappy in its own way. — Leo Tolstoy

On August 22, 2018, Wednesday, a dozen members representing Mysore Citizens Forum (Mysuru Nagarikara Vedike) headed by Sri Shivarathri Deshikendra Swamiji of Suttur Mutt went to Kodagu to see for themselves the devastation brought by the heavy pounding of relentless rains resulting in landslips and flooding in Madikeri and Somwarpet taluks and also to visit Relief Camps in Kushalnagar, Suntikoppa, Madapura and Madikeri.

The Mysore Citizens Forum (MCF) was formed in 2004 to raise funds for the Tsunami victims. Star of Mysore and Rotary Mysore had jointly raised more than Rs. 74 lakh within a month and then under the guidance of Suttur Mutt Seer Sri Shivarathri Deshikendra Swamiji, who also raised a substantial sum, the MCF was set up.

The MCF later constructed 374 houses at Mudaliarkuppam near Pondicherry which was inaugurated by the then Chief Minister H.D. Kumaraswamy. Later, MCF had also given money from the remaining amount to Uttarakhand flood victims’ rehabilitation and also to North Karnataka flood victims.

With this experience in providing shelters to the victims of natural disasters, the MCF in its meeting held on Monday, August 20 at Suttur Mutt decided to extend help to victims and provide shelter by way of subsidy to those who have lost their houses as identified by the District Authorities. It was also decided to visit these disaster areas and also Relief Camps followed by a meeting with the Deputy Commissioner (DC) of Kodagu District P.I. Sreevidya.

We left at 8.30 in the morning from Suttur Mutt premises taking with us two truck loads of special items requested by the Relief Centres. The Suttur Mutt and also P.V. Giri of Siddharta Group of Hotels had collected these items which included shoes, face masks, soaps, detergents etc.

First we went to Madapura Government School where volunteers were running the Centre under the guidance of Manavattira Madhu Bopanna, who, we were told, had himself saved many souls driving his jeep to the disaster area at personal risk many times over. There was a bridge across the backwaters of Harangi Dam to go to the other side where the school is. The confluence of river Hattihole and the Madapura river is also here. We could see domestic articles like TV, fridge, tables, cots, floating near the bridge. 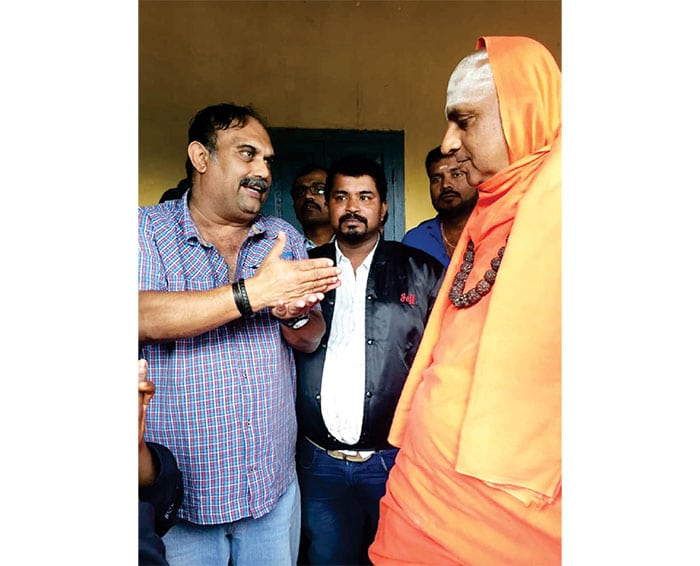 We then came to Suntikoppa where we visited three Relief Centres beginning with the one at St. Mary’s School. The next one was run by Seva Bharati, an RSS outfit. They have taken the upstairs hall of a Kalyana Mantap.  The third one was in the Muslim Madrasa School, which had the highest number of over 500.

Since it was also a day of Bakrid, the Muslim organisers had thoughtfully prepared nice biriyani, the aroma of which hit my nostrils almost tempting me to share the food with the inmates. I was told food served here was better in quality. The volunteers were very agile and good in communicating with the hapless inmates. In all these places, Suttur Swamiji interacted with many victims, enquiring about their loss and the facilities available in the Relief Centre.

Addressing them, he said, while all the needs of the inmates are met with the donations received in plenty, in fact in excess of the requirement, now the urgency is to identify those who have lost their houses and agricultural properties and enable them to rebuild for themselves a new life.

However, we noticed the number of land and house losers, who were original inhabitants of Kodagu, were very few in these camps because a majority of them had gone to their friends, or relatives’ houses in Kodagu, Mangaluru, Chikkamagalur, Mysuru and Bengaluru.

As a result, almost ninety per cent of inmates were either labourers or marginal farmers among whom about 600 were said to be from Assam while some others were from Bangladesh.

Swamiji, while asking them to take courage and have hope in God and philanthropic people of the country, told them that they could send their children to his Residential School at Suttur village where at present over 4,000 students are studying from Primary to High School free of cost — books, clothes, boarding, lodging and schooling. He also told the organisers to avail the opportunity.

We then moved to Madikeri where it was raining and visited about three or four places conveying the same message giving them hope and courage. Finally, we went to the DC’s Office to meet DC P.I. Sreevidya. The District Minister S.R. Mahesh was also there waiting for  the Swamiji. Soon, Minister for Primary and Secondary Education N. Mahesh also arrived. When the Swamiji came, we moved to the well-furnished office corner and discussed the progress made in the arrangements. As expected, it was all hunky-dory. After the initial platitudes, the conversation veered to the action taken by the District Authorities in monitoring the Relief Centres handled by the  NGOs and voluntary groups. I was surprised that there was no proper registering and recording of the inmates with details taken in a dossier so that it would help in rehabilitation of the victims later.

READ ALSO  With three of family dead, this youth has to rebuild his life

However, someone said Identity Cards were given, while some others said all those who came to the Relief Centre were registered with their name and address. When I enquired at Suntikoppa, I learnt it was all a case of headcount and giving shelter and food.

At the meeting in the DC’s Office the question of migrant labourers from Assam was discussed. District in-Charge Minister S.R. Mahesh said they have not lost any property except the work as labourers. Now that the plantations had collapsed and no opportunity for work, they should be helped to go back by buying a ticket and giving some amount for their expense. 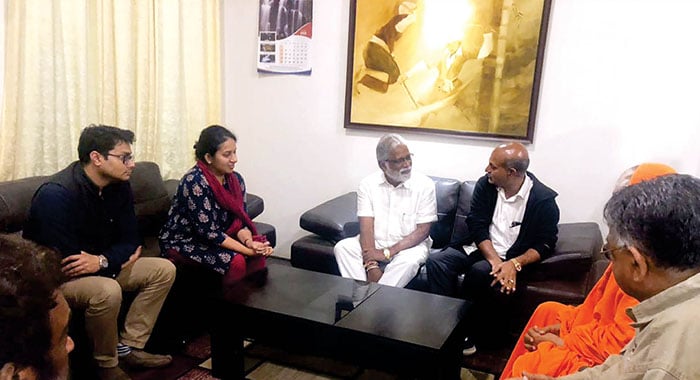 Yes, one can understand this kind of relief on the first and second day of the disaster when it was a crisis and emergency. However, at least on the third and fourth day, the District Administration should have braced itself head-on into what is known as ‘Crisis Management.’ Here comes the identification of individuals, in a group or a family — all the male members, female members and children either of a family or as individual members with full details about their house address, property lost with details, age, sex and thumb impression. This will help in later days when the authorities decide to attend to the relief measures like granting Government land, providing compensation, providing admission to schools for children, preferential treatment in jobs, etc. As they say ‘Everything comes in time to him who knows how to wait.’ Now, with this hope, the dispossessed victims at the Relief Centre should Wait.

But nothing of the kind in the matter of recording names of individuals was available when we spoke to them. Much of such concerns are left in the grey area. 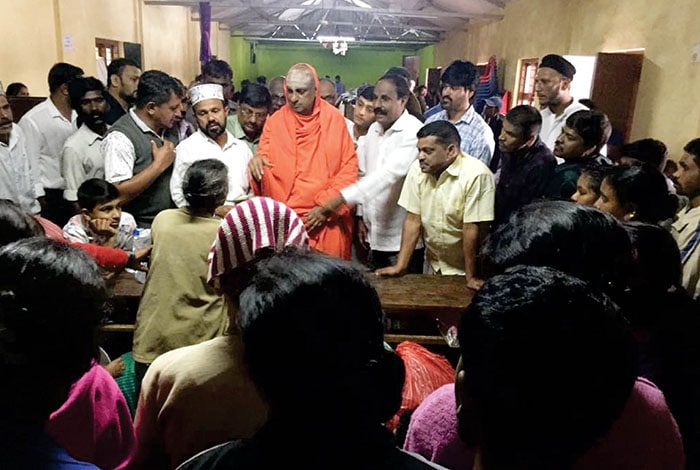 2 COMMENTS ON THIS POST To “Nature strikes terror in Kodagu”