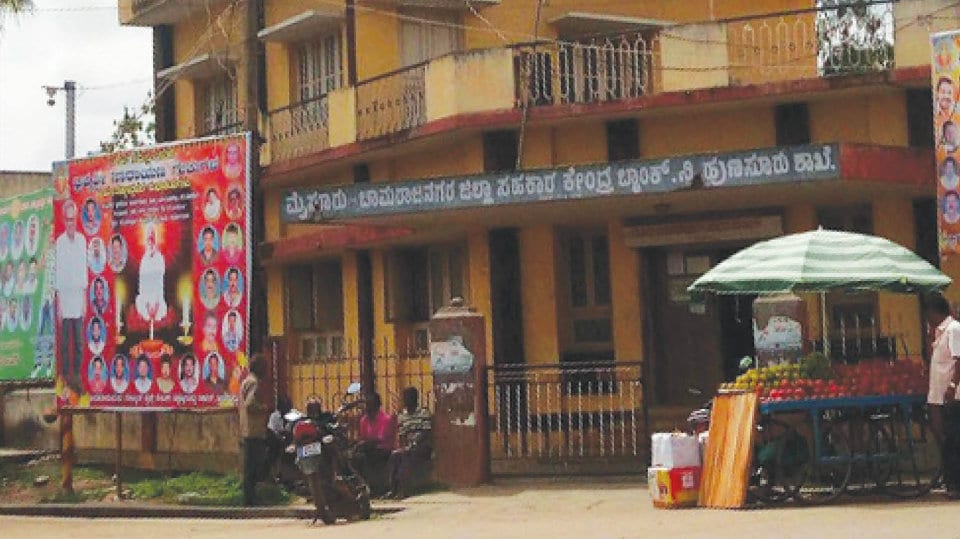 Manager Ramappa Poojar demitted office on Friday following superannuation and subsequently the authorities are all set to issue notice to him.

Ramappa Poojar, who had served as the Manager of Hunsur Branch of MCDCC Bank has been accused of swindling money meant for extending farm loans, over the past five months.

Following complaints that Ramappa Poojar had used the Bank’s money for his personal financial dealings, senior officials of the Bank inspected Hunsur and Bilikere branches of the bank, when the misappropriation came to light.

The Deputy Registrar of Co-operative Societies, in a report, has blamed Ramappa Poojar and Bilikere MCDCC Bank Manager G.S. Niranjan for the misappropriation, it is learnt.

The report also mentions that Ramappa Poojar had credited money to his personal account from the SB and current accounts of Hunsur and Periyapatna Agricultural Credit Co-operative Societies and also vice-versa.

Following the investigation, Co-operation Department officials have instructed the MCDCC Bank to conduct further probe into the matter and take action against Ramappa Poojar, it is learnt.

The alleged huge scam has come to light at a time when the MCDCC Bank is struggling for repayment of loans to APEX Bank and also for leading loans to farmers.

Meanwhile, MCDCC Bank Hunsur Branch Manager Ramappa Poojar, who is at the centre of the alleged scam, reacting to the findings, claimed that he had not misappropriated any money. However, the money was accidentally credited to his personal account and after it came to be known, the money was transferred back to the Bank account, the next day itself, he said.

Maintaining that wrong entry by new staff of the Bank had given rise to such controversies, Ramappa said he was ready to face any probe, while asserting that he was not involved in any misappropriation of funds.

MCDCC Bank Managing Director Lingannaiah said that, following complaints that Ramappa Poojar had used the Bank’s money for his personal money lending business, the Deputy Registrar of Co-operative Societies conducted a probe and submitted a report according to which prima facie found that Ramappa Poojar had misappropriated Rs. 27 crore. The Bank is all set to serve a notice to Poojar, he said and added that Poojar has been transferred out of Hunsur Branch, without showing any place.