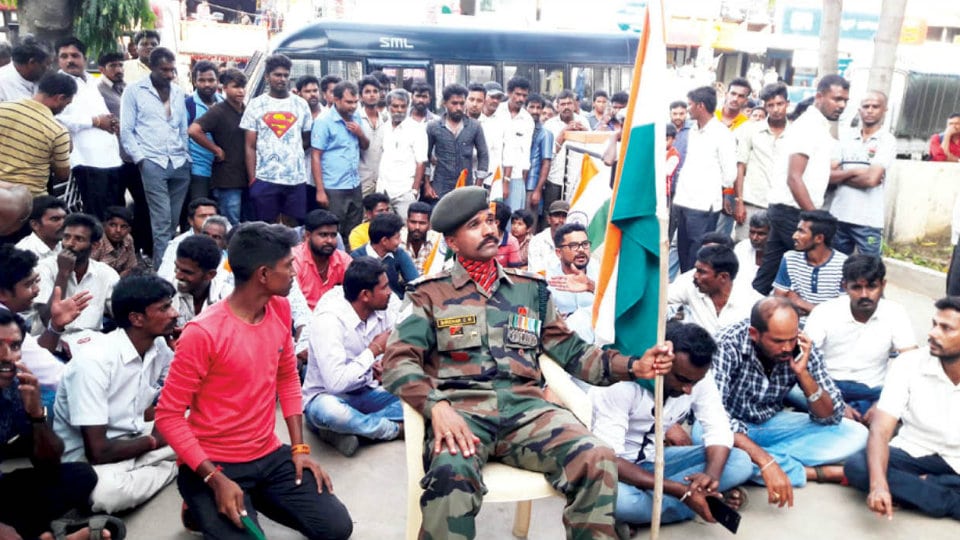 K.R. Nagar: Accusing K.R. Nagar Circle Inspector of disrespecting a retired Soldier, who was being taken in a procession, the villagers staged a protest in front of K.R. Nagar Police Station, demanding suspension of the Cop.

C.M. Sridhar, who retired from the Indian Army after serving for 18 years, was welcomed by the villagers at K.R. Nagar and were taking him in a procession to his native place Chikkavaddaragudi village in the taluk, when they were stopped by Circle Inspector K.K. Raghu, who took the retired Soldier to the Police Station and allegedly abused him.

When SP Amith Singh rushed to the spot, the villagers complained to him that they welcomed the retired Soldier as a mark of respect and were taking him to his village when the Circle Inspector not only abused the retired Soldier but also abused senior citizens using singular words and added that such type of persons in the Police Department would bring a bad name to everyone in the Department. They demanded the SP to suspend the Circle Inspector.

SP Amith Singh, who spoke to the protesters told them the need for taking permission before taking up such things and added that as no prior permission was taken by them, the Circle Inspector had stopped the procession and enquired, which led to the issue.

The SP further said that every Policeman has a lot of respect to our Soldiers and the Circle Inspector had not deliberately committed the mistake.

The SP later garlanded the retired Soldier, following which the villagers withdrew their protest.