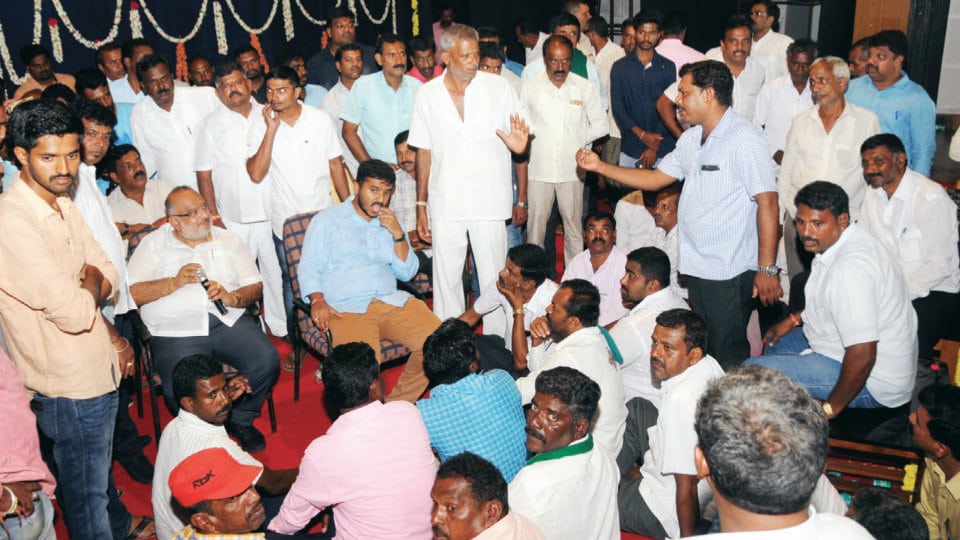 Mysuru: Pandemonium prevailed during the 64th Annual General Body Meeting (AGM) of Mysuru and Chamarajanaga District Central Co-operative Bank (MCDCC) held in the city yesterday. Soon as the meeting commenced, heated arguments broke out between the farmers and the Bank officials, which ensued in a minor scuffle.

The Bank staff of Hunsur and Bilikere branches had misused Rs.27 crore meant to be distributed among farmers by diverting the money into their accounts.

As the meeting, presided over by Bank President S. Chandrashekar, progressed, the farmers of Hunsur and Bilikere region started arguing and vented out their ire against the Directors.

The farmers started moving towards the dais, which resulted in commotion. The farmers picketed the Bank President Chandrashekar and demanded his resignation. G.D. Harish Gowda, a Director of the Bank and son of Higher Education Minister G.T. Devegowda, who raised the issue of irregularities, blamed some higher ups of conniving with those involved in irregularities.

Without taking the name of Chandrashekar, Harish Gowda charged him of deliberately transferring officers who unearthed the irregularities only to save his face. Officers accused of the irregularities were suspended only to be reinstated after sometime, he regretted.

In his defence, S. Chandrashekar, maintaining that he had initiated criminal proceedings against officials involved in the irregularities, said that the Bank Managers Ramappa Poojar and Niranjan and other staff Krishna and Naveen have been suspended.

Assuring that loans would be disbursed to the farmers shortly, he said that Senior Manager Hiriyanna has been appointed as the in-charge CEO of the Bank. Even as Chandrashekar defended himself, the enraged Bank Directors raised slogans against him and insisted on a thorough probe, when it was decided to recommend for a probe by Corps of Detectives (CoD), Special Units and Economic Offences.

The Bank officials of Hunsur and Bilikere branches were accused of delaying issuance of loans of the farmers, with some officials even telling a few farmers that the loans were not sanctioned. It later came to light that the officials had misused Rs. 27 crore meant for distribution among the farmers and had diverted it to their accounts reportedly for investing in the share market and money-lending business.