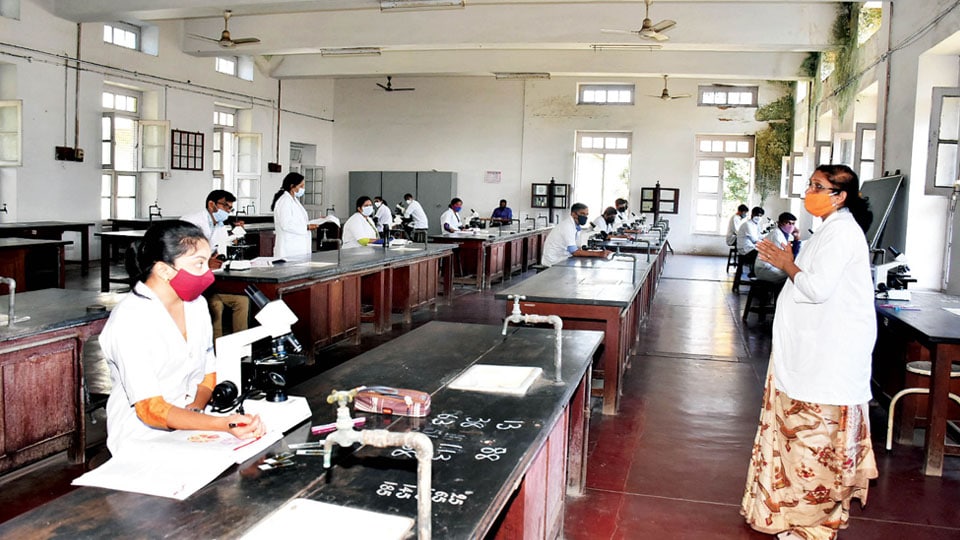 Mysore/Mysuru: Upholding the spirit of ‘Corona Warriors’, over 90 per cent of students of Mysore Medical College and Research Institute (MMC&RI) attended classes on the first day of re-opening of all Medical, Dental, Ayurveda, Pharmacy and Unani Colleges across the State from this morning, after a gap of six months.

“As many as 135 of the total 150 students of our College turned up today. Others were not allowed since they were not having latest RT-PCR test report,” Dr. C.P. Nanjaraj, Dean and Director, MMC&RI, told  Star of Mysore.

Till yesterday, the State Government, Medical Department and Rajiv Gandhi University of Health Sciences (RGUHS) were worried about the students’ turnout for the Colleges in the wake of phobophobia among parents and students about COVID-19 pandemic. Defying threat of Corona, the medical students, with apron and stethoscope in their hands, marched into the Departments much to the delight of College authorities. The turnout of students clearly indicated their grit that they cannot be cowed down by ‘an invisible’ virus against which vaccines are in final stages of approval.

As per directives from State Government and RGUHS, RT-PCR test reports got done 48 hours before, was made mandatory for students attending offline classes. While a majority of them brought with them the test report, others could not access it. So, only ‘negative’ report students were allowed to attend the classes and the rest were asked to undergo free test being held in K.R. Hospital premises. According to Standard Operating Procedures (SOPs), only students with masks were allowed and strict social distancing had been followed inside class rooms. Body temperature and oxygen level of every student was checked with thermometer and oxymeter at the entrance of classroom. Hands-free sanitiser dispensers were kept outside the classrooms to enable the students to wash hands regularly.

Dr. Nanjaraj said precaution had been taken to ensure the safety of both students and faculty. The wooden furniture and other teaching equipment were sanitised regularly. All the classrooms would be totally sanitised once in four days. Meeting of Heads of all Departments was held this morning before opening the doors to students to discuss regarding precautionary measures. Meanwhile, admission into 1st year MBBS course is going on, he added.

A festive kind of atmosphere was witnessed at all Medical, Dental, Pharmacy, Ayurveda and Unani Colleges in the city. Students came out in large numbers to attend offline classes after a gap of nearly six months. Smile on their faces was evident since they met their friends personally after so many days.

“Around 20 percent to 25 percent of students are attending offline classes in over 200 Degree Colleges that come under our purview. We are optimistic that student turnout is expected to improve after January 2021,” Prof. G. Hemantha Kumar, Vice-Chancellor, University of Mysore, told this correspondent.

However, only 13 students of the total 679 in Maharani’s Arts and Science College for Women attended the classes this morning. There has been no improvement of student turnout despite the Colleges were re-opened on Nov. 17.

The College authorities are conducting both online and offline classes for the benefit of students.