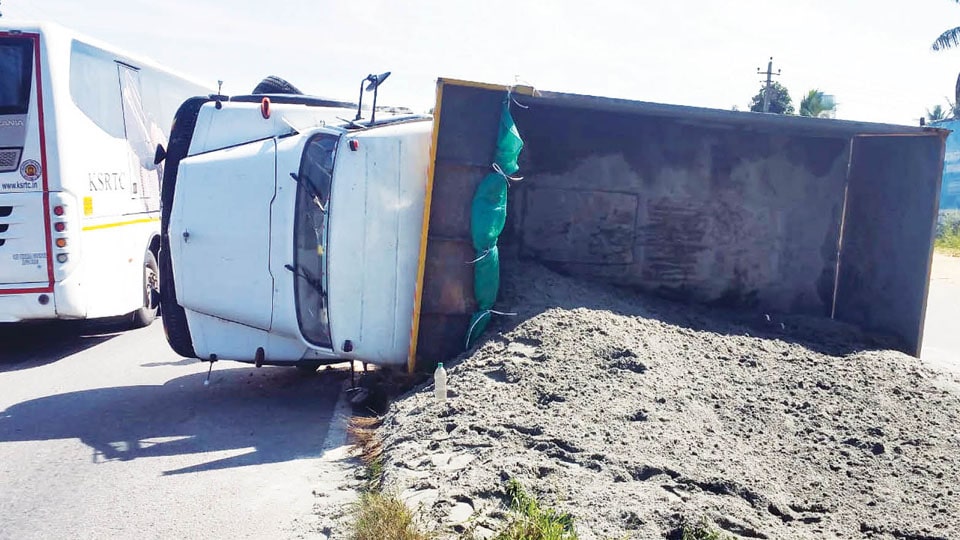 Close shave for both drivers near Srirangapatna

Srirangapatna: Two persons driving a truck and a car escaped with not so serious injuries after the M-Sand-laden truck hit a road median and veered off the road to topple on a moving car on the busy Mysuru-Bengaluru Highway this morning. So dramatic and quick was the accident that the drivers could not even realise what was happening to their vehicles.

The accident attracted many onlookers and other vehicles stopped by only to talk about the miraculous escape.

The toppled truck right on the middle of the four-lane Highway had blocked a portion on both sides of the road which is being widened to a 10-lane Highway and there are no warning signs for the speeding vehicles to slow down.

The incident occurred at Gowripura village near Srirangapatna and according to eyewitnesses, non-installation of warning signs and haphazardly placed barricades on the road resulted in the accident that could have been fatal.

The M-Sand-laden truck, an Indica car behind it and another car moving ahead of the truck were proceeding towards Mysuru from Mandya side. Eyewitness account says that the vehicles were speeding and as they reached Gowripura the car that was ahead of the truck moved in a zigzag way due to barricades placed on the Highway in an unscientific manner. These barricades were placed by the road workers to facilitate the ongoing Highway expansion works.

After toppling on the car, the truck crashed on the road. Luckily, the drivers of the truck and the car sustained minor injuries and it was a close shave. The M-Sand had spilt all over the road and the car. The heavy vehicle had further blocked a portion of both sides of the Highway.

Residents of the village and motorists alleged that the Highway that is being widened has become more dangerous to travel of late as barricades are haphazardly placed. They alleged that warning boards have been placed at zones that are not dangerous while dangerous stretches of the Highway lack warning signboards.

Srirangapatna Rural Police visited the spot. A complaint was yet to be filed when we went to the Press.