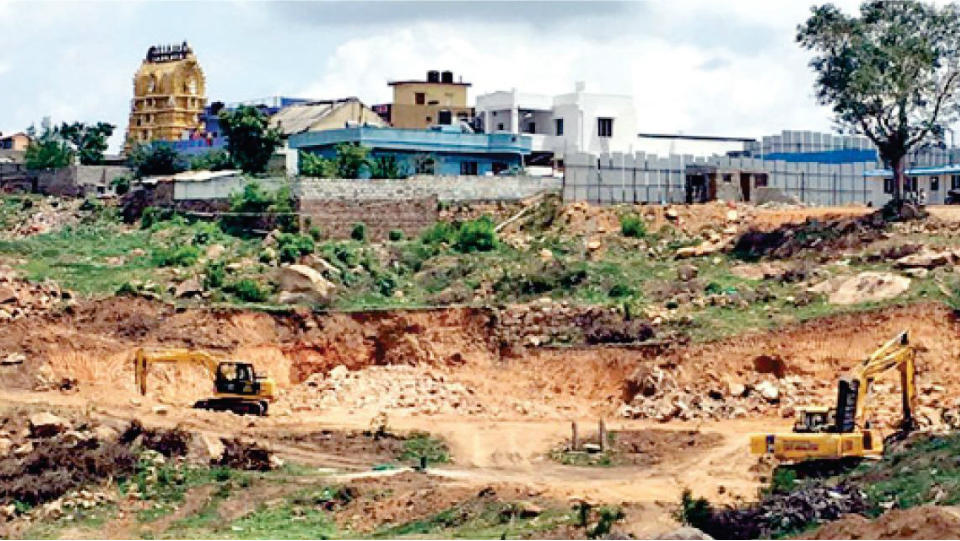 Recent visitors to Chamundi Hill who have peeked through the barricades must have wondered what happened to all the protests and Public Interest Litigation (PIL) by Mysore Grahakara Parishat (MGP). Unfortunately, construction activities on the Hill to build multi-level parking, shopping complex and shelter for pilgrims are progressing at rapid speed. MGP has not been a mute spectator ever since the construction resumed towards the end of 2016 after submitting a so-called Environmental Management Plan (EMP). MGP, besides giving a chronology of public protests during the last year to stop the vandalisation of Chamundi Hill, wants to give the latest attempt by MGP to save Chamundi Hill even at this late stage.

Since Chamundeshwari Temple generates huge funds and has accumulated over Rs. 80 crore, politicians always have ever been ready to dream of projects to spend it in the name of development and to provide facilities to increasing number of pilgrims. Projects like widening the roads to facilitate faster movement of cars, constructing multi-level parking space, huge shopping complex, shelter to prevent waiting in the sun, were proposed from time to time. Though the politicians were fully aware that all such projects would harm the delicate ecology and affect the beauty of the Hill, greed of earning money was uncontrollable.

It was the gazette notification of April 28, 2016 paving the way for widening of road on the Hill that caught the attention of MGP and other activists to initiate protest against the vandalisation of the Hill. In April 2016, the Chief Minister laid the foundation stone for a slew of construction projects in the name of development. Earlier also there have been attempts to “develop” the Hill by building a canopy over the climbers’ steps and ropeway which also would have resulted in damaging the ecology of the Hill. Thanks to public protests led by MGP, they were stopped with the assurance to protesters that the original developmental plan would be altered suitably. 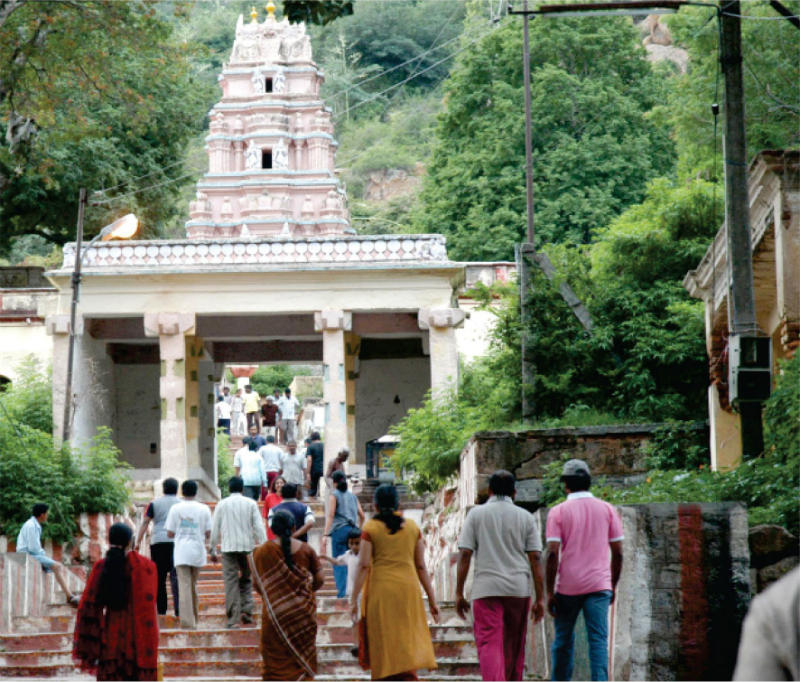 However, in the case of Chamundi Hill construction projects, MGP has not been successful so far. A mammoth protest was held at the foot of Chamundi Hill led by noted novelist Dr. S.L. Bhyrappa, royal family members Pramoda Devi Wadiyar and Yaduveer Krishnadatta Chamaraja Wadiyar, and hundreds of leading professionals of the city on May 29. It was followed up on June 3, 2016 by MGP conducting a public meeting to educate the public on the potential hazards of widening roads and construction projects next to the temple. It looked like that the Government dropped the idea of widening the road on the Hill as a result of these protests. But they were determined to proceed with multi-level parking and shopping complex.

On June 18, a candle-light march to Save Chamundi Hill was organised in which thousands of the public protested. That also did not have any impact.

But the protests resulted in the then Deputy Commissioner, C. Shikha, meeting MGP on June 23, 2016 to discuss the concerns of the environmentalists. Thanks to the DC asking the Public Works Department (PWD) to develop an EMP, work was stopped for some time. MGP was demanding for a full blown Environmental Impact Assessment (EIA) since, according to the latest Environmental Protection Act, without an EIA no construction activities should be taken up.

However, after a few months, a cursory EMP was developed and approved. Without taking the public into confidence and sharing the EMP report, PWD started the work on the Hill. MGP met the new DC D. Randeep, and also some of the political leaders to convince them why the construction was in violation of the Environmental Protection Act. MGP failed again.

MGP’s PIL against the Government to stop work on Chamundi Hill was admitted on July 11, 2016 in Karnataka High Court. But MGP did not succeed in getting a stay order to its disappointment. The High Court ruled on Apr. 3, 2017 granting liberty to MGP to approach the Ministry of Environment, Forest and Climate Change by two weeks, and make a representation to be considered by the Principal Secretary.

MGP has now decided to file a Special Leave Petition (SLP) against this ruling in the Supreme Court. It is hopeful that SC will rule in its favour and save Chamundi Hill for the future.