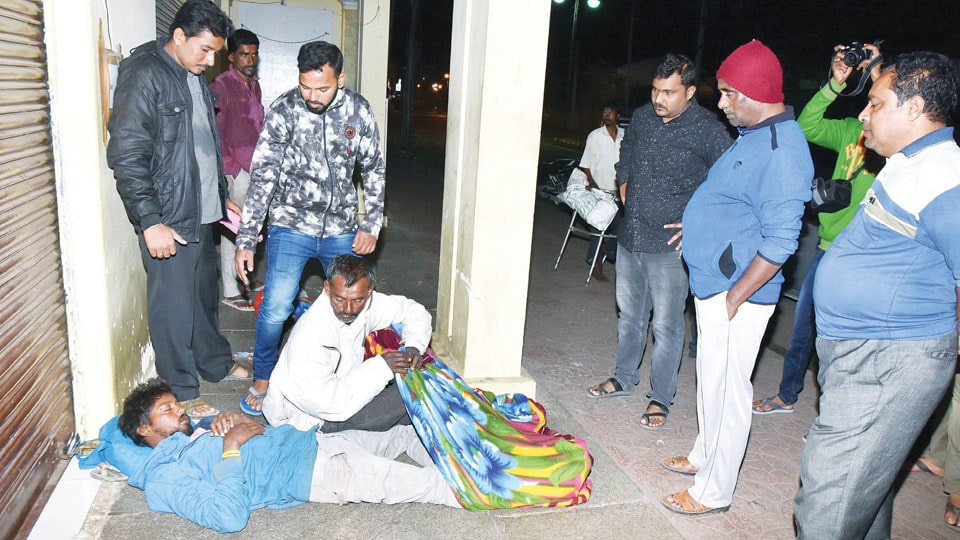 Midnight survey of homeless in city

Mysuru/Mysore: To improve the living standards of people below poverty line and those who seek shelter under flyovers and bridges in cities, Governments usually roll out funds and monitor the situation. But on-ground data reveals a sorry state where the number of urban homeless has shown a gradual increase and statistics reveal that almost 90 percent of the urban homeless in India is yet to get a shelter.

Following a Supreme Court directive to State Governments to conduct rapid survey of homeless populations of cities, authorities from the Shelter for Homeless along with NGOs and staff of the Mysuru City Corporation (MCC) conducted a rapid survey last night from 11 pm to 1.45 am. The team moved in vehicles across the city and identified 42 persons who were sleeping on the road sides and in front of closed shutters of shops. They were shifted to the Shelter for Homeless in Gokulam.

Sleeping men were woken up and bundled into vehicles and taken to the shelter.

While most of the homeless men resisted the attempts of shifting, they were convinced by Manager of Shelter for Homeless Rethan, Kiran and a few volunteers. They were told that sleeping on the streets was unsafe and they could go to work from the Shelter for Homeless.

Speaking to Star of Mysore this morning, Rethan said that last night, 42 homeless men were admitted to the Shelter and the place now houses over 100 people including the 59 already admitted ones. The survey was conducted in order to ensure individual entitlements to each homeless person such as ration cards, financial inclusion and health schemes, he revealed.

People housed in the Shelter can go to their regular work and return in the night. They work as construction labourers and contract workers. “We need to initiate the formal admission process to the newly identified homeless and once done we do a detailed health check-up and provide free treatment at K.R. Hospital. We counsel them and identify the reason why they are sleeping on the roads. Some of them land on the streets due to domestic fights. In such cases we summon their family members and convince them to take back the persons,” he added.

People who are old and frail are treated and referred to Old Age Homes and those with disabilities and in an incurable state are sent to New Ark Mission of India Home for Hope in Bengaluru run by ‘Auto Raja’ at Doddagubbi village, he added.

Data will be compiled and analysed in terms of gender, nature of stay, occupation and area of operation to make suitable arrangements to the homeless people. The survey is set to culminate in an action plan to provide need-based access to shelters to this marginalised category of people.