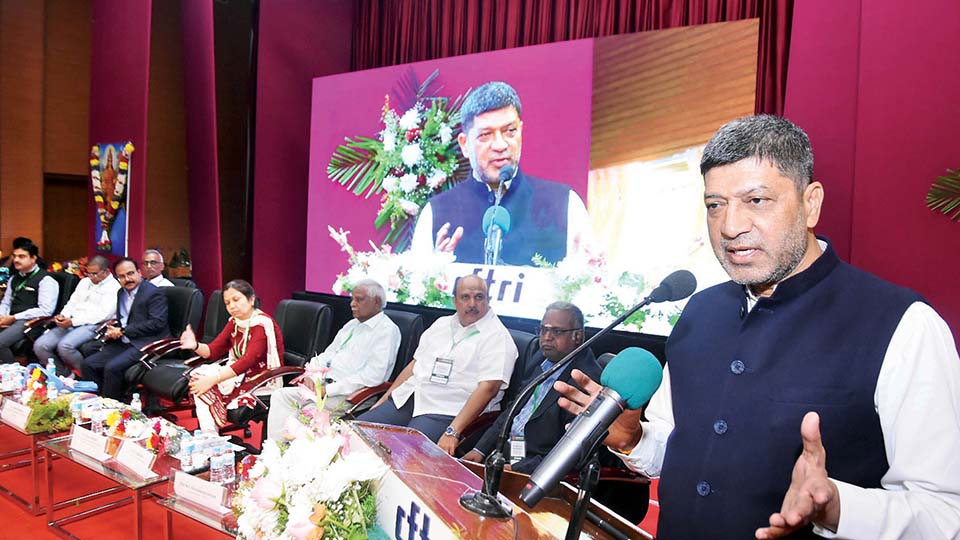 Millet cultivation decline a cause of concern: Senior agro officer

Mysuru: Dr. Ashok Dalvoy, CEO of National Rainfed Area Authority under the Union Ministry of Agriculture and Farmer Welfare, has expressed concern over the declining output of millet crops.

He was speaking at the third and concluding day of the third edition of a three-day conclave TechBharat-2022 at CSIR-Central Food Technological Research Institute (CFTRI) in city yesterday. The event was organised by the IMS Foundation and Laghu Udyog Bharati – Karnataka Chapter in collaboration with CSIR-CFTRI. Though the conclave ended last evening, the exhibition part of more than 100 stalls was extended by a day due to the huge response it got from the public. The expo will conclude today evening.

Ashok Dalvoy was speaking at the session ‘Food Technology: Employment Opportunities in the Processing of Millets’ on the third day of the Tech Bharat .

Noting that millets used to be cultivated in large quantities in the southern States of India like Andhra Pradesh, Odisha, Telangana and Karnataka, he said that millets were earlier cultivated in an area of 35 million hectares of land. But it is now being grown in only 15 million hectares, he regretted. “Agriculture scientists and food processing resource persons should work towards encouraging farmers to grow millets which is widely regarded as a health supplement,” he opined.

Stating that the millet industry has abundant opportunities in the agricultural sector as it can be used to manufacture many other foods which are consumed worldwide, he said that the millet industry also has the potential to create more employment opportunities and entrepreneurs should make use of this. “Agriculture scientists, technologists and researchers have the responsibility of disseminating information in this connection and encourage the entrepreneurs,” he added. “Banks and financial institutions are providing loan facilities at low interest rates for those who produce value-added products from millets and the Union Government has also provided  financial grants of Rs. 93,000 crore to the agricultural sector,” he concluded.

Millet cultivation must be encouraged

Millets are the ideal crops to grow in our country which depend mainly on quality of soil, quantity of rainfall and weather. Other crops like rice, wheat which are grown in huge quantities for their lower cost of production may result in lower yields during times of natural disasters and diseases. But millets can be grown in all climates and their cultivation should be encouraged to meet the demands for food in the country.