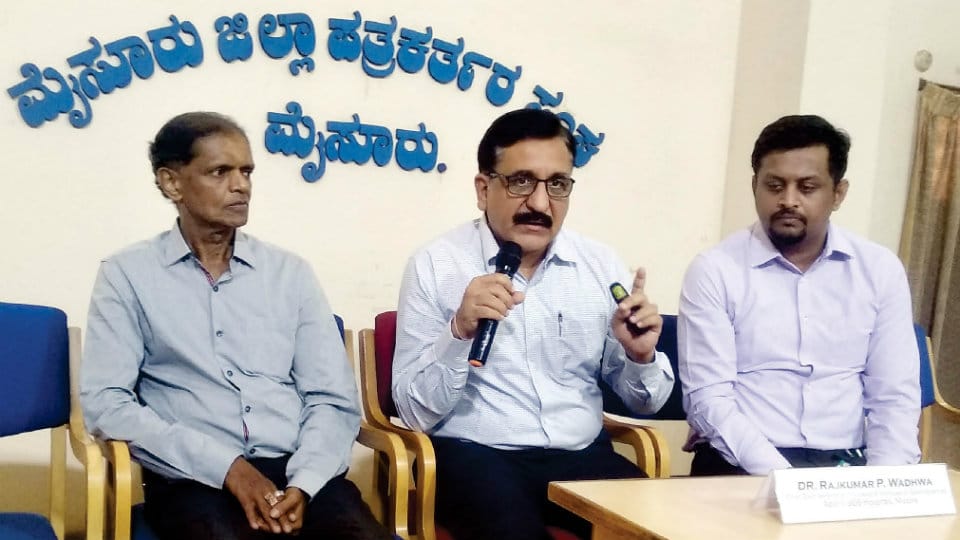 Mysuru:  A minimal invasive gastro procedure was done for the very first time in the State at Apollo BGS Hospitals, Mysuru.

A 59-year-old patient, named Devaraj, who visited Dr. Rajkumar P. Wadhwa, Chief Gastroenterologist & Head of Department of Gastro Sciences, Apollo BGS Hospitals, Mysuru, on Apr.13, was diagnosed with severe jaundice and fever. Further evaluation revealed a large stone that was blocking the bile duct which was life-threatening and this stone could not be operated upon.

Addressing a press meet in city recently, Dr. Rajkumar P. Wadhwa said, “This large stone was formed over the last four years where initially he was diagnosed with Liver Cirrhosis. He had excessive bleeding while he underwent a surgery at a different hospital and for the same, he was infused with 12 units of blood to recover him back. After the surgery, the flow from the bile duct to his intestine was blocked and further it was managed with a stent with a plastic tube inside for several years. In 2015, the stent was removed and was brought to Apollo Hospital in city a month back in a very critical state with having reported of a large stone in his bile duct.”

At Apollo Hospital, technology excellence and experienced skills of the consultant, an equipment called SPY Colangioscopy with Electrohydraulic Lithotripsy was used. This scope was inserted through the bile duct inside the liver to blast the large stone into small pieces. These small pieces were brought out completely and Devraj is absolutely leading a normal life now.

“State-of-the-art technology, Apollo Doctors skills and the quality of the procedure provided by the Department of Gastro Sciences lead by Dr. Rajkumar P. Wadhwa, has given a new life to Devaraj from this very rare case by this minimally invasive gastro procedure. Apollo BGS Hospitals, Mysuru specializes in all kinds of Minimally Invasive Gastro procedures as we are looking at planning to do complex surgeries requiring endoscopies. This life-saving procedure is one of its kind procedure done in the whole State of Karnataka. People travel from all over Karnataka including Bengaluru to get this procedure done at Mysuru. Mysureans need not go outside the city to get this minimally invasive procedure done,” said N.G. Bharateesha Reddy, Vice-President & Unit Head, Apollo BGS                   Hospitals, Mysuru.