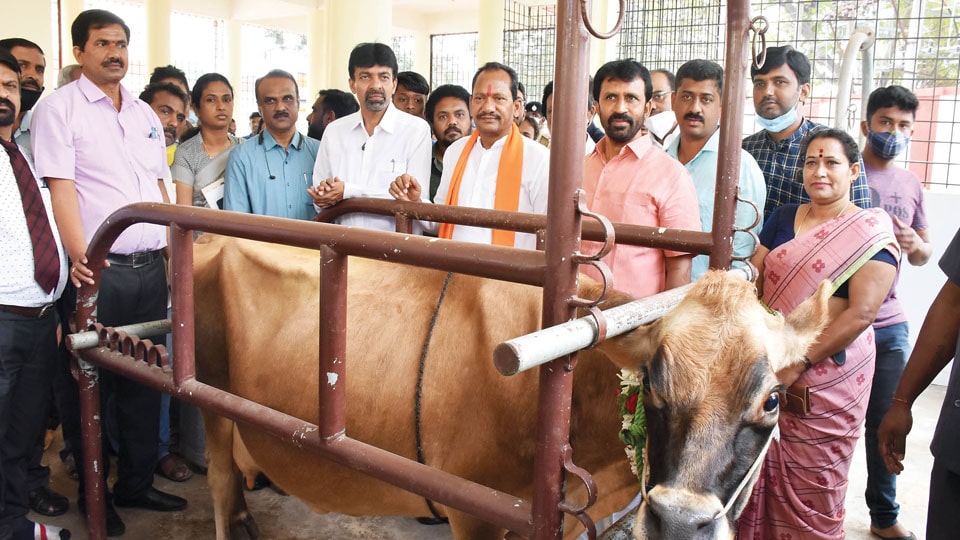 Speaking on the occasion, he said that the Multi-Speciality Veterinary Hospital will be a 24×7 Hospital — polyclinic for treating all kinds of animals including cattle heads, goats, sheep, horses, dogs, monkeys, birds and other domestic and pet animals, when they fall sick.

Pointing out that the existing Veterinary Hospital has been upgraded to Multi-Speciality Hospital at a cost of Rs.2.78 crore, he said that the Hospital has a built up area of 11,620 sq.ft, having 18 rooms meant for surgeries, medicine dispensary, gynaecology and cardiac care, ortho, x-ray, scanning and other care facilities for animals.

Maintaining that the Hospital has been equipped with advanced veterinary medical equipment, Chauhan said that the Hospital also has a Semen Storage Unit, a Polyclinic, a huge Liquid Nitrogen Cylinder and other supplementary facilities.

Highlighting the measures taken by the Government for animal care, the Minister said that there are plans to construct such Multi-Speciality Hospitals in Bengaluru, Belagavi and Tumakuru Divisions as well and measures will be taken to construct own building for Veterinary Hospitals in all districts of the State.

Referring to vacancies in Animal Husbandry Department, Chauhan said that there are 52 percent vacant posts in the Department and he would discuss the issue with the Chief Minister and the Finance Minister.

Asserting that the Government is effectively implementing Pashu Sanjeevini Scheme for animal care (Ambulance Services and Helpline), he maintained that there is reason behind the introduction of Anti-Cow Slaughter Bill, which envisages a ban on all forms of cattle slaughter.