Home » News » After a two-year break…: Golden Chariot to chug from Mar. 14 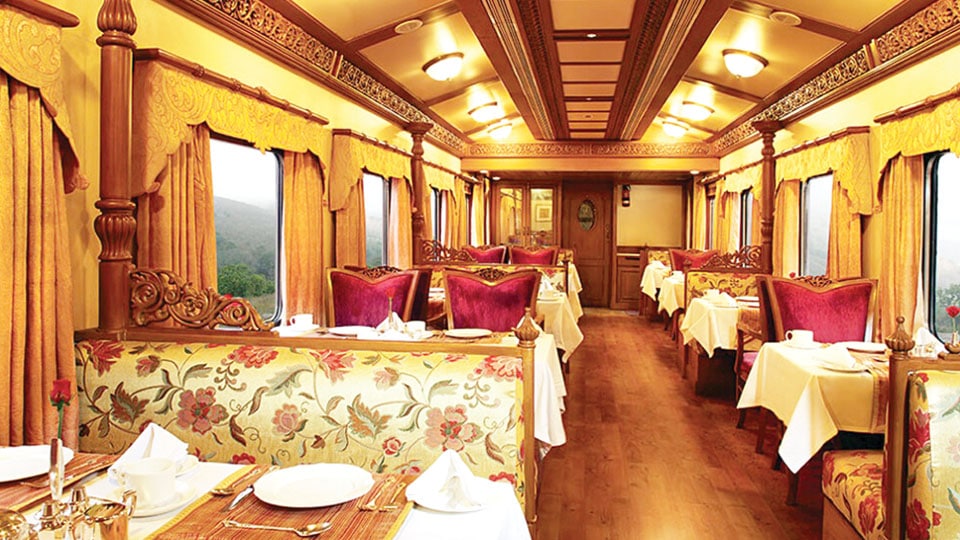 After a two-year break…: Golden Chariot to chug from Mar. 14

Mysore/Mysuru: After a two-year break, luxury on wheels — The Golden Chariot — will chug again from March 14 and March 21 under two opulent packages — ‘Pride of Karnataka’ and ‘Jewels of South’. The Indian Railway Catering and Tourism Corporation (IRCTC) has given a new lease of life to the train.

Popularly called ‘Palace-on-Wheels’, the marketing and operations of the luxury train was handed over to IRCTC in November 2019 after the Karnataka State Tourism Development Corporation (KSTDC) signed a 10-year agreement with IRCTC. Earlier, the train incurred a loss of Rs. 41 crore due to low occupancy rates and the Government had halted the train.

Now, the IRCTC has taken the train under its wings and all its 18 luxurious coaches have been given a makeover with new interiors at Ashokapuram Railway Workshop in Mysuru. Now the interiors are plusher and all the earlier furniture has been replaced. The vestibule (passage between the two coaches) has been made seamless all along the coaches and the train is packed with new attractions. Its iconic purple exterior has been retained and motif decoration has been made more meaningful by including Yakshagana Kirita (headgear). The yellow band running across the train will explain tourist monuments.\

The Golden Chariot will set off on a fresh journey from the Yeshwanthpur Railway Station from March 14. The IRCTC has launched bookings and released brochures, detailing the packages. Tariffs range from Rs. 3.20 lakh for couples and Rs. 2.40 lakh for single occupancy. There is a 50 percent discount on booking as inaugural offer.

READ ALSO  Dasara Ambari only during Navarathri, but this Ambaari all round the year

The ‘Pride of Karnataka’ (6 nights and 7 days from March 14) takes the travellers from Bengaluru to Bandipur, Mysuru, Halebid, Chikkamagalur, Hampi, Badami and Goa and back to Bengaluru.  The ‘Jewels of South’ (6 nights and 7 days from March 21) will take travellers on an epicurean journey from Bengaluru to Mysuru, Hampi, Mahabalipuram, Thanjavur, Chettinad, Kochi, Kumarakom and back to Bengaluru.

Launched in 2008 by KSTDC, the train was facing decreased patronage over the years and the occupancy rate was only 30 to 35 percent on an average. Added to the burden was the high haulage charge by the Indian Railways and the KSTDC was paying between Rs. 50 lakh and Rs. 55 lakh per trip as haulage charges to the Railways.

Now revenue sharing between IRCTC and Railways has been fixed at 56:44. After March-April package, the next Golden Chariot season will start from October.